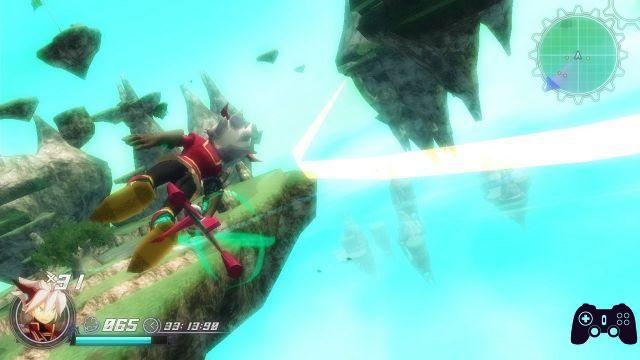 It is a strange adventure that of the latest work by Yuji Naka, the father of Sonic e Nights, and his studio Prope. Announced in 2010 on Wii and formally completed in 2011, Rodea the Sky Soldier it then disappeared from the radar for a few years. Kadokawa Games, the Japanese publisher, at the time considered it not profitable to publish the game on the then dying Nintendo fixed console, deciding to use its internal developers to create a port for 3DS. Only last year was finally announced the release of the long-awaited title, on 3DS and, surprisingly, also on Wii U. For this latest version, Kadokawa inexplicably decided to use the 3DS version as a base rather than the Wii one despite the fact that Wii U was perfectly capable of handling the Wiimote-based control system of the first edition of the game. The Rodea that we are in our hands, by the grace of NIS America who edited the European edition, it is therefore a very different game from the one originally conceived and developed by Naka, which, on the other hand, remains available only as a bonus disc within all "first print" copies of the Wii U version.

Rodea the Sky Soldier tells the story of two warring kingdoms, the Naga mechanical empire and the burgeoning Garuda, located on a series of islands floating in the sky. 1000 years after that legendary war the android Rodea awakens in the kingdom of Garuda, devoid of memory but inexplicably endowed with a human soul, and finds himself fighting against the allies of yesteryear to thwart a new invasion launched by Naga and to keep an ancient promise. Through a story that unfolds over a couple of dozen chapters, players will have to deal with old and new enemies and allies, gradually discovering details of what happened a thousand years ago and the origins of Rodea itself. Who knows well some of Naka's works like the two Sonic adventure can imagine the tenor of the story: compelling and full of twists, however tacky and full of clichés. From a gameplay point of view, Rodea draws on another Naka classic, namely Nights and his aerial acrobatics, even if a more modern yardstick could undoubtedly be Gravity Rush. Unlike the little PS Vita masterpiece, the controls are one of the pain points of the game. Rodea can walk and jump, but much of the action takes place in flight. After making a jump it is possible to stop in the air for a few seconds, aim with the left stick and launch towards a target from a distance. Unfortunately the aiming reticle is slow and rather inaccurate, while a rudimentary lock on system only makes things worse, often hooking an object or an enemy other than the one we wanted. Once in flight it is not possible to change our direction, except by selecting a new target and completely changing trajectory. If we add to this the management of the camera which is not perfect and often late in our actions and the fact that the period that can be spent in the air is limited, the recipe for disaster is complete. What should be simple trajectories and easy crossings are thus transformed into desperate enterprises bordering on ridicule, full of dozens of superfluous and unwanted movements that have fallen on deaf ears.

As the game progresses, the situation improves slightly, partly because one learns to compensate for the deficiencies of the control system, partly because Rodea's abilities are upgradeable, improving, for example, the time you can hold out in the air, but the impact with the game's introductory chapters is very disarming. All this does nothing but frustrate the player, also because if on the one hand the level design encourages you to try stunts, to reach remote places with power ups and collectibles, on the other the fear of making mistakes and falling into the void transforms what should have been a joyful and exhilarating experience in a continuous run on the razor's edge. Due to a physics simulation of all span in the air, for example, it is impossible to know how the character will behave on landing. The very appetizing power-up located on a distant platform turns into an unpredictable risk, since Rodea could land correctly, but also bounce off the platform and end up in the void. The levels of the game are also littered with enemies, which due to their lack of initiative are reminiscent of those of the various Sonics: these are passive rather than active threats, and are often placed in strategic areas to allow the player to hook up to them and continue the stunts. . Rodea has two main modes of attack. The first is a rotating attack in flight, which will hit the locked enemy, the other is to draw a rifle and fire bullets of energy. Needless to say, this second mode is not recommended in most occasions: the slow rate of fire, the reload time, but above all the low damage inflicted on the enemies make it really uncomfortable to use the weapons, not to mention the general slowdown of the gameplay and the complete interruption of its flow. The sporadic boss battles are more successful: they are robots of colossal dimensions, which will have to be scaled to reach their weak points. Here, for once, Rodea's design limitations don't spoil the experience, and the game manages not to tarnish the clear inspiration that comes directly from these phases. Shadow of the Colossus.

At least you can play the original ...

From an aesthetic point of view, the impact with Rodea is not the best and is a direct result of its troubled development. In fact, we must keep in mind that the 3DS version, on which the Wii U is based, has been recreated from scratch by Kadokawa's staff, and therefore tuned to the limitations of the portable console. In making the next Wii U port, no graphic beautification was done. The settings that the artistic style would like to be varied and lush are therefore made with few polygons and low-quality textures, while the framerate is sadly stuck at 30 FPS. The animations are simplistic and if it weren't for a well-chosen art design, there really would be nothing savable in Rodea. Speech apart, however, for the sound sector, rich in cheerful and captivating music and with the double English and Japanese audio track. Subtitles are available in English, French, German and Japanese: unfortunately there is no Spanish, as well as some phrases that the characters pronounce while browsing the menus are strangely not subtitled. As for the longevity we are faced with at least a good fifteen hours of gameplay. The 25 levels that make up the game are long and articulated, and have a score evaluation system based on multiple parameters, including the time to complete and the number of collectibles collected, to encourage replayability. By collecting the various medals it is also possible to unlock some special levels in which to face very particular challenges. The most welcome extra regarding the physical Wii U edition is instead a copy of the original Wii version of Rodea, contained in the game package. This is the only opportunity to get your hands on the title as Yuji Naka originally conceived it and, as you can read in our parallel review, a far more satisfying experience.

Verdict 5/10 A disaster resulting from an incomprehensible port. Perplexed comment. So I found myself playing Rodea the Sky Soldier for Wii U, especially after comparing it to the Wii version. Instead of bringing the 3DS version with all its problems and limitations, couldn't Kadokawa just make an HD port of the much more functional Wii version? The Rodea that is delivered to us on 3DS and Wii U is a very different Rodea from what Yuji Naka had in mind and ultimately a worse Rodea. There is no shortage of ideas, given that the sources of inspiration are among the noblest, from Sonic to Nights, passing through Gravity Rush and Shadow of the Colossus, but the technical realization really leaves something to be desired, both from an aesthetic and a point of view. gameplay. Let's be clear: not everything is completely to be thrown away, but after almost 5 years of waiting we expected more than a mediocre title that only sporadically manages to entertain. Only luck? The presence of the Wii version in all "first print" copies of the physical Wii U edition. The only real reason to buy Rodea. Pros and cons ✓ Universe, history and interesting characters
✓ Respectable audio sector
✓ The "first edition" Wii U copies also contain the original and higher Wii version x Cumbersome, inaccurate, not funny
x Design that frustrates the player's wishes
x Graphically inadequate
Do you want to be a video game expert and know all the tricks, guides and reviews for your video games ? Holygamerz.com is a group of video game fanatics who want to inform you about the best tricks, guides and tips. We offer you the best information to be a reference in gaming, so here you can find guides, tricks, secrets and tips so you can enjoy your games to the fullest. Are you ready to get all the achievements of that game that you resist so much? Enter now and enjoy your favorite video game to the fullest!
News Minecraft: Story Mode - Season Two, release date ❯

Add a comment from Rodea the Sky Soldier review