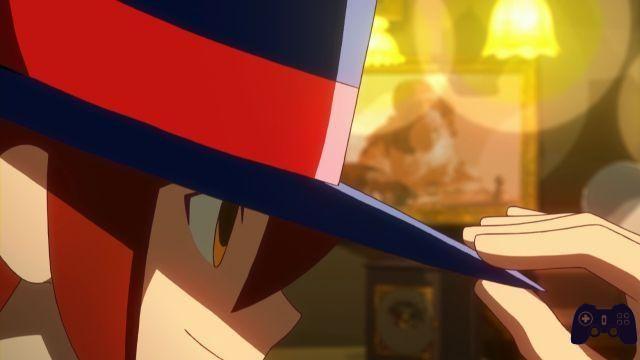 Rhythm Thief and the Emperor's Treasure is the first real rhythm game, or musical if you prefer, for Nintendo 3DS to reach European soil thanks to the collaboration between Sega and Nintendo.
Unlike other music games, Rhythm Thief stands out for the variety of gameplay with we will find ourselves in the various mini-games, an element that will allow us to take advantage of almost all the functions of the 3DS.

Who is Phantom R…?

Set in today's Paris, Rhythm Thief and the Emperor's Treasure follows the story of Phantom R, a young thief capable of infiltrating anywhere - whose true identity is an XNUMX-year-old boy named Raphael - and his trusty little dog Fondue. The "mission" of this nice duo is to recover the Dragon Crown, and thus solve the enigma of the mysterious resurrection of the emperor Napoleon Bonaparte (!).

Before talking about the rhythmic mini-games, the real core of the game, it is right to make a comparison with the most successful series of Level 5, the Professor Layton saga, since Rhythm Thief freely draws inspiration from them in numerous parts of the gameplay (if we exclude , in fact, rhythmic games ... ed).
The upper screen, in which the map is located, is perhaps a little too inspired by the Level 5 Professor's map, and here the comparison is necessary with the fifth chapter of Layton (the Mask of Miracles) already released for 3DS. in Japan and still unpublished by us: once published, you will understand how the inspiration is almost even a "tribute" ...
The strong "Laytonesca" influence also shines through in the search sections, where we should touch the touch screen in search of clues and sounds to continue the adventure, CDs of the game's soundtrack and "Medals" that will allow us to unlock some tools help for the rhythm games and movies of the main story (has anyone thought of Layton's help coins? ed).
The impact of Professor Layton on the universe of graphic adventures on laptops is also noticeable in the small (mostly rhythmic) puzzles scattered here and there in Rhythm Thief, puzzles that are of an aberrant ease when compared to the real protagonists of the gameplay, the minigames.

The real fulcrum of the game - by now you have understood it - are the Rhythm Challenges, a series of 50 minigames in which we will have, through three sections, to score the most points and get the best possible evaluation. Each rhythm challenge represents a fundamental point of the plot, so get ready to infiltrate the Louvre to the sound of music, play a violin to escape from the French cops, or dance the samba (with songs taken by weight from Samba de Amigo and Project Rub, ed. ) and grab the meat with Fondue in the extra challenges, also always to be faced at the right pace
The gameplay of the Rhythm Challenges takes full advantage of the 3DS thanks to its priceless variety: we will have minigames based on the touch screen, games in which you have to press the keys with the right timing or levels in which you will have to take advantage of the 3DS gyroscope and move the console in time ( !!!), to dodge attacks or grab a piece of meat ... Unfortunately, however, the calibration of the games varies from gameplay to gameplay and is not at the same level for everyone; if the challenges based on the touch screen are the most successful - and detect the commands perfectly - those based on the motion sensor have a few seconds of delay, a problem that makes the challenge more difficult than expected.
If on the one hand some challenges are very entertaining, on the other hand some turn out to be unnerving, a factor due to the too severity of the game which, when the player makes a mistake, catastrophically lowers the vote and if this happens in the last stages of the challenge, it will make a comeback is impossible (more than once to myself it happened to make a mistake at the end and to go from an A to a C ... ndGuido).

Like any self-respecting graphic adventure (à la Layton ...), Rhythm Thief also contains many animated scenes, which tell the salient parts of the game with great skill (although the presence of a censorship for the shots ...!); the English dub is not excellent but sufficient to reflect the characterization of the characters, and the polygonal patterns of the rhythmic challenges are great for a handheld console. The only flaw is the absolute uselessness (practically "lack") of the 3D effect, that seeing it brought to a 3DS title is almost kind ... Even calibrated to the maximum, the 3D effect is null and makes it even more confusing to follow the challenge. Clearly if Rhythm Thief had been released for any other console we would not have given weight to the lack of a 3D effect but, as it was developed for a console that proudly wears the word "3D" in the name itself, the absence is noticeable and weighs heavily. .

Will you grant me this dance?

The absence of 3D, however, is partially offset by a respectable soundtrack. The music of the Rhythm Challenges is catchy and will hardly be forgotten, indeed you will probably find yourself whistling or humming them more often than expected…!
Also, Raphael and Fondue are two characters that will captivate you, perhaps more than the game itself.
Rhythm Thief and the Emperor's Treasure is a title that has a lot to offer, including collectibles, the Hard mode unlockable at the end of the game and the Street Pass feature that will allow you to challenge your friends' records is bound to give you many hours of musical enjoyment, hoping that a probable second chapter will correct the defects of the first and move the Phantom R universe away from that Laytonesco one ...


Verdict 7.5 / 10 Was it really necessary to use the gyroscope? Comment The severity of Rhythm Thief in the ratings makes it unnerving and hateful, but the original music and the characterization of the protagonist make it a fun and exciting title (especially in the final stages). Unfortunately, the inspiration from Layton's universe is heavily noted and, with great regret, it must be admitted that the thief is not the same as the Professor, from many points of view; we hope for an improvement in future chapters, if there ever will be. In the meantime, the advice is to play this title thinking as little as possible about Professor Layton games, because Phantom R deserves - at least - a chance without prejudice. Pros and cons ✓ Original music and songs
✓ Well characterized protagonist
✓ Some rhythmic challenges are a lot of fun x Too strict rating system
x Poorly calibrated gyro rhythmic challenges
x Too much like Layton in the exploratory stages

Do you want to be a video game expert and know all the tricks, guides and reviews for your video games ? Holygamerz.com is a group of video game fanatics who want to inform you about the best tricks, guides and tips. We offer you the best information to be a reference in gaming, so here you can find guides, tricks, secrets and tips so you can enjoy your games to the fullest. Are you ready to get all the achievements of that game that you resist so much? Enter now and enjoy your favorite video game to the fullest!
Xenoblade Chronicles Review ❯

Project Winter Review - The heat of the company

Add a comment from Rhythm Thief and the Emperor's Treasure Review