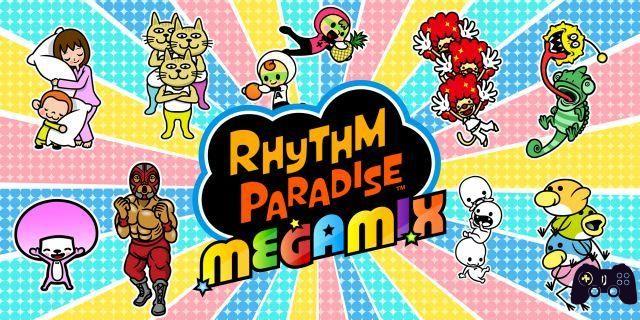 One of the fundamental demands in music video games is to have an excellent sense of rhythm, without which any title of the genre becomes practically an impossible challenge. For this reason, a simpler mode is often inserted that is able to entertain even the most casual players, reserving the real challenges only for the most experienced ones. This is not the case with the Rhythm Paradise series (Rhythm Heaven) which makes rhythm accuracy its workhorse. Now in its fourth chapter published last year in Japan and in June in the United States, Rhythm Paradise: Megamix will be available from next 21 October also in Europe on 3DS, both digitally via eShop and in physical format in stores for € 29,90.

The first big news of Rhythm Paradise: Megamix is ​​the story mode. For the first time in the series, in fact, you will find yourself in front of a real story, obviously used as a mere pretext to propose almost a hundred mini-games. The small Tibby he falls from heaven and, left alone and helpless, he will ask for help from the first person he meets. The player's task is to help the little man with the afro to return home to the Paradise of Rhythm. As already mentioned, the plot of Rhythm Paradise: Megamix surrounds the minigames but this does not mean that it will spare fun moments and a couple of unexpected surprises capable of making both the fans of the series and the newcomers smile.  Megamix is ​​an excellent chapter with which to approach the brand thanks to the presence of practically all the minigames of the predecessors, obviously with the inevitable addition of new rhythmic challenges.


The world of Rhythm Paradise: Megamix is ​​divided into zones each consisting of four different minigames, while from the second part of the story, at the end of the series of four, a themed Remix will be proposed that contains the games just faced. As per tradition, the difficulty of Megamix will gradually increase, trying to refine the player's sense of rhythm with each attempt to improve their score. The evaluation of each minigame is again based on the mistakes made, on the timing and on the Talent Star, which will be awarded every time you perform a certain action in the game to perfection. Tibby will then give you useful coins to spend in the bar for souvenirs to be exhibited at the museum, or to face the Portals of the Sages, containing special challenges in three different difficulties. The coins are also used to be able to skip a certain minigame that causes you problems, thus trying to avoid hysterics for yet another too low score. 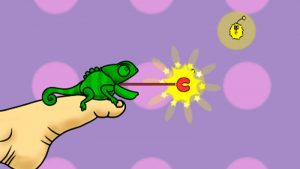 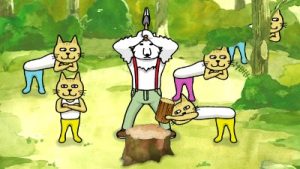 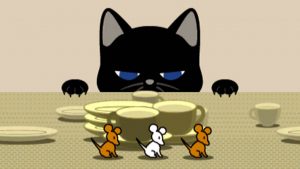 In addition to the Story mode containing around 75 games, Rhythm Paradise: Megamix offers the possibility to face particular challenges on the Train of Challenges, alone or in groups (via Download Mode), in series of games that require a certain score to be completed. These challenges will give access to the Rhythm Balls, which can be exchanged for another fifteen historical mini-games inside the Megamix Bar. It is then possible, once available, to try i 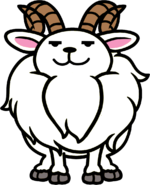 Perfect in the appropriate section: certainly the most difficult challenge in the game, not missing a single shot in each of the hundred mini-games is an arduous and commendable undertaking. At the Bar of Megamix, in addition to the aforementioned games, we will find a museum dedicated to those of History, with the ost that can be purchased at the shop, and a nice goat to feed through a pinball machine. Finally, there is a StreetPass mode where you can face the players you meet and get rewards like turnips for the goat, rhythm coins and rhythm balls.
This fourth chapter of Rhythm Paradise, as you may have guessed, offers a greater amount of content than the previous ones, increasing not only the challenge factor but also the total longevity, at a decidedly advantageous price.


For a handful of minigames

But the protagonists of the series are always them: the crazy mini-games lasting about two minutes, in which the player's nerves remain tense as he tries not to miss a single shot. Megamix can be approached both via touch-screen with the stylus (like the second episode that made the series known in the West) and with the keys (mainly directional cross, A and B) trying to adapt to any type of player. Among the 75 games present in the story mode there is no shortage of novelties such as Lingua Lunga (a very hungry thug chameleon) or Basket of Fruit (a pool of water that wants to become a basketball champion) but also great classics such as Trio Brio, Microorganisms and Rolls Rolls although some of these have only been taken in weight by the belonging chapters and proposed without any change in Megamix. The same can be said of the total of the minigames present, which on many occasions only offer variations of the setting and obviously increase in difficulty, halving the number of different games available. Fortunately, even if they are not a hundred different games, they are practically all successful and able to entertain thanks to their originality and madness.

During the review we have repeatedly mentioned the difficulty of Rhythm Paradise, Megamix is ​​not far behind, and asks for a real commitment from the player especially from the second part of the game onwards. Each challenge can be completed with an appropriate sense of rhythm, but to get the highest scores you will need to become true aces, while the perfect still remain a prize for a select few. It is precisely the difficulty not suitable for everyone that could stop you from a possible purchase, aware of the fact that you are missing one of the best exponents of the musical genre.

Obviously there would be no minigames if it weren't for the splendid music that makes up the Rhythm Paradise soundtrack. Songs that will surely enter your brain, by dint of trying to improve the score and get the perfect coveted. Once you have passed the minigame, you can buy the song at the Bar to be able to listen to it whenever you want. Megamix allows at any time to change the audio from English-Spanish to Japanese only, in order to fully enjoy the sung tracks, while each text is fully translated into excellent Spanish. As per tradition, Megamix also relies on a cartoon design and mainly in 2D, although there is no shortage of minigames with three-dimensional models. The excellent mix between animation and music manages to convince and will surely remain impressed even in new players.

Verdict 9/10 But it was just OK Comment Although one year behind the release at home, Rhythm Paradise: Megamix is ​​a triumph of music and color. Repeating all the crazy mini-games of the previous chapters, without neglecting the new proposals, and providing for the first time a side plot, Rhythm Paradise: Megamix offers such a vast longevity for an affordable price (€ 29,90), practically becoming a purchase obligatory for fans of the genre. The novices of the series, however, must be aware of the difficulty of the brand, never like this chapter highlighted by severe but fair scores. We are sure that if you enjoyed the previous chapters, or love the genre, you will love Rhythm Paradise: Megamix. Pros and cons ✓ Advantageous price
✓ Great soundtrack
✓ Among the best of its kind
✓ One hundred minigames ... x ... but some are variants of others
x Difficulty definitely not suitable for everyone

Do you want to be a video game expert and know all the tricks, guides and reviews for your video games ? Holygamerz.com is a group of video game fanatics who want to inform you about the best tricks, guides and tips. We offer you the best information to be a reference in gaming, so here you can find guides, tricks, secrets and tips so you can enjoy your games to the fullest. Are you ready to get all the achievements of that game that you resist so much? Enter now and enjoy your favorite video game to the fullest!
Special Inside (and behind) Landflix Odyssey: interview with Fantastico Studio ❯

Ni no Kuni II Review: The fate of a kingdom and an elongated soup