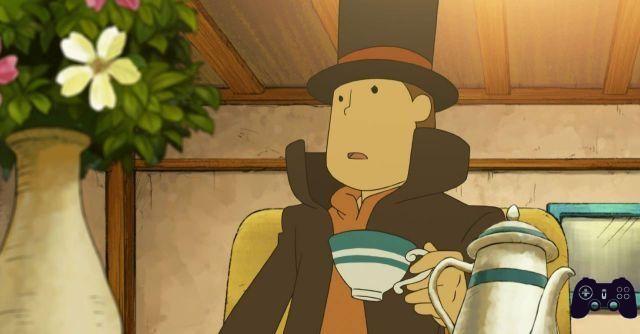 As they say, the real pleasure lies in waiting. Exactly 2 years later than the launch on Japanese soil, last November 25 even we European fans were able to finally get our hands on the fourth chapter of the (new) saga of Professor Layton!

Professor Layton and the Call of the Ghost marks the beginning of a new trilogy, preceding that of the three chapters already available in stores; moreover, it is the latest chapter developed for the Nintendo DS (the next episode will, in fact, be released only for 3DS) and probably one of the last AAA titles in the European line-up of the now obsolete Nintendo handheld console.

I want to be your assistant, Professor!

The story is set three years before the events of The Village of Mysteries: Layton receives a letter from his old friend Clark Triton, containing an encrypted request for help; together with his assistant Emmy Altava, the professor decides to join his friend in difficulty in the town of Misthallery.

Misthallery, needless to say, has a curious peculiarity. This is enveloped, every night, by a thick fog; during this phenomenon, a huge specter destroys the buildings of the city: the houses, fortunately, are always evacuated in time thanks to the anonymous reports of the oracle of the country, the son of Layton's friend, the one who is destined to become the apprentice by Professor: Luke Triton.

It will be up to us to help Layton find out what this phantom Ghost is and why he wants to destroy the city. All, of course, always surrounded by the inevitable puzzles proposed by the professor and the city of Misthallery!

What do you say, Luke?

In addition to the 170 puzzles available, in The Call of the Ghost there is a big change compared to the previous chapters. To solve most of the Mysteries related to the main plot of the game, Layton will ask us questions and we will, for the first time, have to solve the secrets of Misthallery in first person; however, it should be specified that, unfortunately, the correct answer is often easily guessed among the three provided by the professor, a detail that makes the enthusiasm for the introduced novelty fall a little bit and that clashes when compared with the real puzzles of the game, never how complicated this time!

The inevitable minigames are also back, much more numerous than the previous chapters: we will have to deal with a blue fish that will have to collect coins in the time limit in 10 different aquariums (a bit like the parrot did in The Lost Future); the use of a toy train, which is nothing more than the scale model of the Molentary Express (protagonist of Lo Scrigno di Pandora), through 10 different tracks, unlockable by solving the “extra” puzzles of the inhabitants of Misthallery; a puppet theater, with three plays available in which we should indicate the right action to take (just like the illustrated books of The Lost Future).

Completing all three minigames 100% will unlock, as always, more difficult traditional puzzles. There is also, as a further extra, a minigame very similar to "Catch the Mole" in which we should hit as many mice as possible in the time limit but, unlike the aforementioned games, we will not have any puzzle as a prize once the subgame is over.

In The Call of the Ghost, some special skits have been included in the course of the narration, which show various moments from the past and different backstories of the inhabitants of the city and the protagonists of the game, scenes that will prove to be a real collectible of the title. Some of these "episodes" will be unlocked as you progress through the story, while others will only be unlocked by talking to certain people at certain points in the story.


In the game there is also another collection, this time in the strict sense of the term: by exploring the areas with the touch screen, in addition to the help coins and the secret puzzles, small treasures will come out to be found and collected (at least for an archaeologist like Layton!).

As you can imagine, both collections are completely optional, as they don't add any riddles to the list.

What happened to London?

We are therefore faced with a very vast and incredibly long-lived game, much more than any Layton ever published, which will require over 30 hours of play to be completely finished in every detail (without guides and / or video-solutions in hand, of course. !!! ed). However, if we are to be honest, the American and Japanese versions of this game offered an extra 100 hours of gameplay.

Yes, you read that right, ONE HUNDRED hours which, no one knows why, have been removed from the European version of The Call of the Ghost. We are talking about the much rumored London Life, which for months was in the limbo of uncertainty, only to be removed from our cartridges for good.

London Life is a role-playing game lasting - as already mentioned - 100 hours, set precisely in London where, after creating his own character, the player interacts with the professor and with a long series of characters, taken from all four chapters, and by carrying out missions, new areas were unlocked to visit.

Who knows why, this modality has not reached us. A serious unjustified lack, which would have made The Call of the Ghost like the swan song of the Nintendo DS ...


I don't believe my eyes, or even my ears!

Level 5 guys have done it again! As in every chapter of the brand, every graphic detail is studied in detail, making each character perfect for the single pixel and immediately recognizable. Moreover, despite the years pass and the number of chapters increases, the charisma of the main characters is not affected, on the contrary, it is further strengthened in this fourth episode. The 2D graphics, together with the animated scenes, also make The Call of the Ghost a novel game, capable of entertaining and moving the player without the need for complex and refined direction, but simply through the breathtaking artwork created by Level5.

If the graphics sector is a feast for the eyes, even the music is delicious, as always impeccable and so amazing as to make the gamer fall in love with it.

Verdict 8.5 / 10 Luke I'm your father Comment Professor Layton and the Call of the Ghost is one of the best chapters of the professor's adventures, including puzzles and twists, and a great starting point for those who have never played it. Level 5 once again manages to drag us completely into the Layton universe, as if we were reading a book of our favorite saga. In a late 2011 full of video game shootings, Call of the Mirror is the perfect alternative for gray matter. Now we just have to ask ourselves: when will the fifth chapter come out? Pros and cons ✓ Puzzles for all tastes
✓ Excellent character design
✓ Exceptional music x The European version is missing London Life
x It is not a game for everyone
Do you want to be a video game expert and know all the tricks, guides and reviews for your video games ? Holygamerz.com is a group of video game fanatics who want to inform you about the best tricks, guides and tips. We offer you the best information to be a reference in gaming, so here you can find guides, tricks, secrets and tips so you can enjoy your games to the fullest. Are you ready to get all the achievements of that game that you resist so much? Enter now and enjoy your favorite video game to the fullest!
Pokémon Sword and Shield Guides - Complete Guide to Rocks max ❯