Review Atelier Sophie: The Alchemist of the Mysterious Book

If there is a company that over the years has managed to break into the hearts of JRPG fans, it is undoubtedly Gust with the series Atelier. With the advent of PS3 this series has undergone a constant and immense evolution with each chapter, which has prompted a company like Koei Tecmo to buy the small software house. After the Dusk trilogy, Gust decided to take it one step further and move on to the current generation, with Atelier Sophie: The Alchemist of The Mysterious Book which marked the debut of the series on PS4.

A book that changes your life

Atelier Sophie stars Sophie Neuemuller, a young girl from Kirchen Bell who runs her grandmother's alchemical atelier, who died years before the events of the game. Sophie learned alchemy from her beloved relative, but unlike the latter, the girl is not much of an alchemist, but her deep self-esteem and willingness to make everyone in the city happy spur her on . The days pass quietly with his old friends, Monika and Oskar, until he comes across a book he has never seen before. The book in question has a will of its own and is able to speak, it is in fact a named alchemist Plachta, who transferred his soul to the book decades ago. Unfortunately Plachta has no recollection of her past, but discovers that by writing new alchemical recipes in the book her memories begin to come back. Made this discovery Sophie will decide to bring back the memory to Plachta, helped by the latter thanks to her experience with alchemy. From here their adventures will begin.

As simple as it is in nature, the plot is very pleasant. The characters are also well characterized, each with personal stories and past that it will be up to the player to discover through many secondary events. Lovers of good stories won't be disappointed this time either. 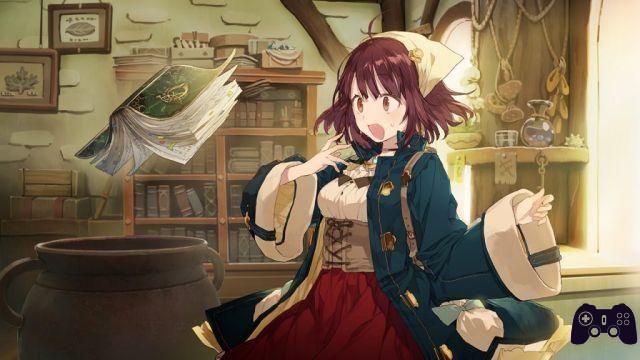 Alchemy take me away

In the Ateliers, alchemy is always the master. So it is and so it will be. Although the underlying nature of the synthesis of objects is always the same, Sophie introduces a number of substantial innovations that bring a breath of fresh air to the series. To begin we will not have the classic list of objects to create, but rather we will have to find the idea first, which can arise from a battle, looking at a certain place, collecting a certain material and much more. Once this is done we will see Sophie write the recipe in the book and back to our atelier we will finally be able to start synthesizing all kinds of useful objects. As always, each material has its own quality that will affect the final result, but here we find the second novelty introduced in this chapter: thanks to a system of rings present in the cauldron, if we are able to fill as many as possible then the quality of the created object will be greater but not only that, we will also have the possibility of unlock hidden effects and more powerful than the basic ones, essential to create the best possible object. Weapons and armor instead will be created by other characters, Logy, already seen in the Dusk trilogy, who will take care of the weapons and Leon, a stylist who will provide us with various armor. Obviously this does not happen for free and is always linked to alchemy, as the two need specific materials to create what we need. 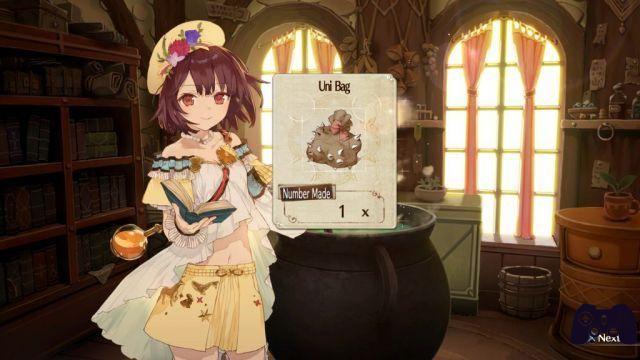 If on the one hand we will have to create objects, on the other hand there are many clashes waiting for us. Atelier Sophie offers a completely new combat system, never seen in the past. The nature of the fighting always remains turn-based, but with a distinctly tactical and strategic attitude. At the beginning of our turn we will have to choose the actions of all our party members, with the possibility of putting them in a defensive or offensive position, this will actually start the turn with the characters that will use the moves chosen by the player. Deciding the location is essential based on the enemy and the situation that we will find ourselves facing, for example by clashing against a particularly difficult boss, it would be wiser to move into a defensive position, thus giving life to a series of actions that see our allies protecting each other. On the contrary, if we want to attack with our heads down, with the offensive position we will bring attacks in the chain to inflict as much damage as possible. The presence of a bar named "Chain" it will then establish the type of action that will be performed. Bringing it to 200% we will see the characters defend or attack in groups, at 300% instead we will use the most powerful move supplied to each character, also present in attack and defense variant. 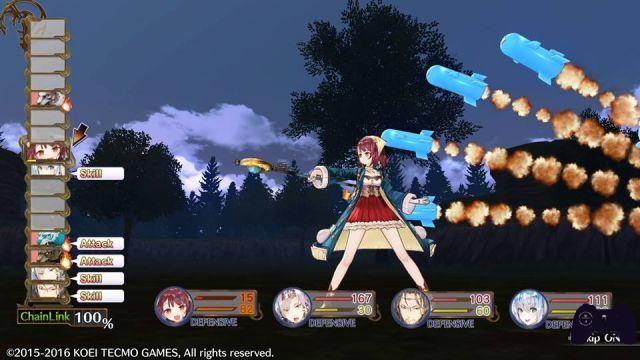 How to build a doll

Another novelty introduced with this chapter is the Doll Make System. Advancing in the story Sophie will be able to give a body to Plachta, transferring her soul into the body of a doll created especially for her. Thanks to this function we will be able to customize the girl as we see fit, using the same materials collected for the summaries. Also in this case, high quality materials lead to a better result in Doll Make, than not only will change Plachta's appearance, but above all it will increase its statistics, if not worsen them if you use rather scarce materials. Although the final aspect is decided by four basic parameters, there are several results that we can come across. It is all in the decisions made by the player when choosing the materials and if he is not satisfied he can always change until he gets the result that suits him most. Plachta is a very useful character in battle and thanks to the doll make it can become a very precious ally in clashes. 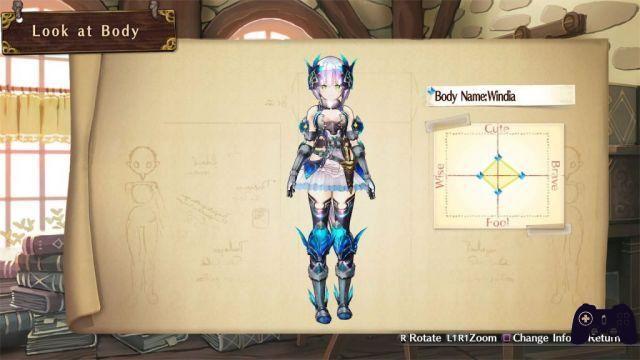 As already seen in Atelier Shallie, too Atelier Sophie eliminates the time limits that have always been present in the series. The player has absolute freedom of choice of what to do, how and especially when, without having to fear of running into the game over screen due to not having seen a particular event within a specific time limit. Despite this some innovations have been introduced which add some variety in terms of gameplay. There are a calendar, day / night cycle and weather. The three factors affect the progress of the game as some objects or monsters can only be encountered at a certain time, the same happens with the weather, which varies from sun to light rains to real storms. Always thetime affects the lives of the inhabitants of Kirchen Bell: if the city is full of life during the day and we can go around talking to its citizens, at night they will all go to sleep except for the adults who go to Horst's bar. own at the bar we will be able to accept the classic quests, ranging from eliminating a certain monster to creating a specific item. There are also some special quests that have multiple objectives, but to accomplish them it will be enough to satisfy a single requirement. If we manage, however, to complete all the requests of the quest, not only will we get more money, but we will be gifted with voucher to be used by Tess, the bar waitress, who in exchange for tickets will give us rare and unique materials and accessories. 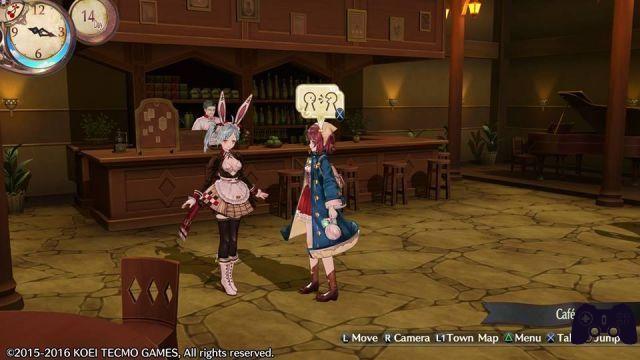 In Japan, Atelier Sophie was released not only on PS4 and PS Vita, the only versions to arrive in the West, but also on PS3. This makes the title be quite limited on a technical level but the work done by Gust is still excellent and well cared for. On PS4, the game runs entirely at 60fps and except for one case, Leon's Valkyria ability, there is no drop in framerate. Although the environments are not very large, they are very varied and colorful, in line with the tones of the game. The character models are made properly and embellished with the beautiful character design of Noco and Yuugen. The audio part is not far behind. The songs present are all very catchy with really beautiful pieces, thanks not only to the composer, but also to singers like Rurutia who have contributed to giving life to one of the best soundtracks in the series. Also present the original Japanese audio, which is appreciated by all fans of the genre.

Verdict 8.5 / 10 Alchemy and DIY dolls Comment The Atelier series officially makes its PS4 debut with Sophie. A good plot, beautiful characters and above all a more strategic gameplay and the renewed alchemical system make the title accessible to both veterans of the series and newbies. An RPG that transmits tranquility and sweetness but deep at the same time, which will give you many hours of good fun. Recommended to anyone. Pros and cons ✓ Good texture
✓ Deeply renewed gameplay
✓ Well balanced difficulty
✓ Constant 60 fps x Graphically it is an old-gen title
x Less varied and vast than in the past
x Repetitive quests
Do you want to be a video game expert and know all the tricks, guides and reviews for your video games ? Holygamerz.com is a group of video game fanatics who want to inform you about the best tricks, guides and tips. We offer you the best information to be a reference in gaming, so here you can find guides, tricks, secrets and tips so you can enjoy your games to the fullest. Are you ready to get all the achievements of that game that you resist so much? Enter now and enjoy your favorite video game to the fullest!
Review The Walking Dead: Michonne - Episode 2: Give no Shelter ❯

Maneater | Review: a shark against all

Add a comment from Review Atelier Sophie: The Alchemist of the Mysterious Book