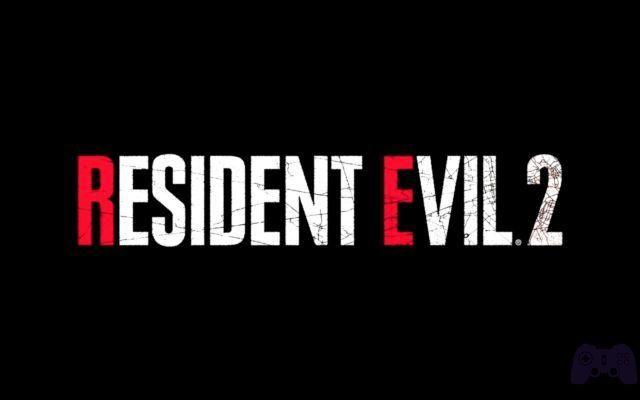 resident evil, the franchise created by Capcom, which revolutionized the history of video games, of the first Playstation, but above all that started the genre survival horror, is one of the series that thrills millions of players around the world. Today, given the imminent release of Resident Evil 2 Remake, we will tell you how it all began and we will retrace, chapter by chapter, the history of the game. 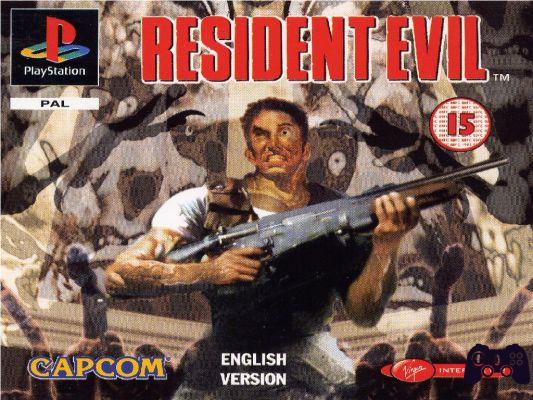 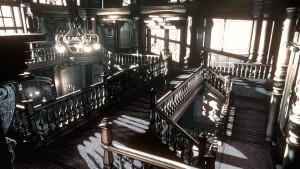 To learn more:
resident evil
The first chapter of the series comes out in 1996, year of Crash Bandicoot, Metal Slug, Super Mario 64 and Diablo. Initially published for PlayStation and later for PC, Saturn and even a decade later Nintendo DS, Resident Evil immediately makes it clear what it's made of and becomes famous for being a title capable of transmitting the true feeling of terror to the player.

resident evil is set in 1998 and tells about the team STARS, in charge of recovering the members of the Bravo team who disappeared during an investigation into the mysterious murders. Forced to retreat into a villa, which turns out to be a research center of the Umbrella Corporation, a world-class industry operating in a wide variety of fields. We should choose whether to impersonate Chris Redfield or Jill Valentine, in what will be an investigative mission against Umbrella and the experiments it conducted, which led to the creation of a virus capable of making living beings into undead hungry for human flesh. As if that were not enough, our protagonists will also have to contend with Albert wesker, a STARS member secretly affiliated with Umbrella. 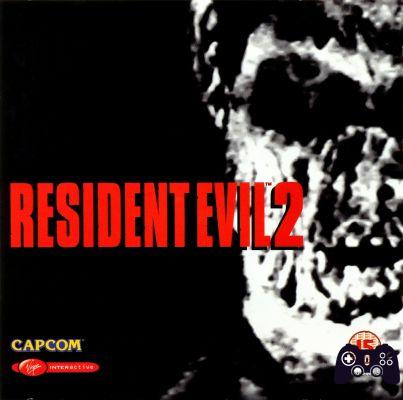 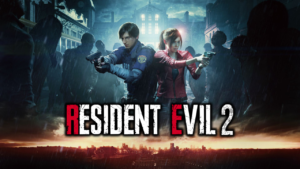 Second and most beloved chapter of the series, it talks about the events lived by Leon Scott Kennedy e Claire Redfield. The game is set in Raccoon City, two months after the events of the first chapter. There STARS is unable to accuse theUmbrella Corp. and the company secretly continues the experiments in an underground facility. An attempted data theft of the scientist's work William Birkin fails and the T-Virus is spread in the sewers of the city, Birkin himself is infected with the new G-virus, mutation of the T-virus itself. The T-Virus infects rats, and rats infect the city population turning them into zombies, leaving only a few survivors, including Leon Kennedy recruit and the only policeman left alive in the Raccoon Police Department, and Claire Redfield looking for her brother Chris who It's disappeared. Leon and Claire will search and manage to escape the city alive. Leon will be promoted and become part of a government agency, while Claire will continue the search for her brother.

According to many, it has been called the best chapter ever. 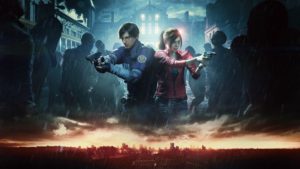 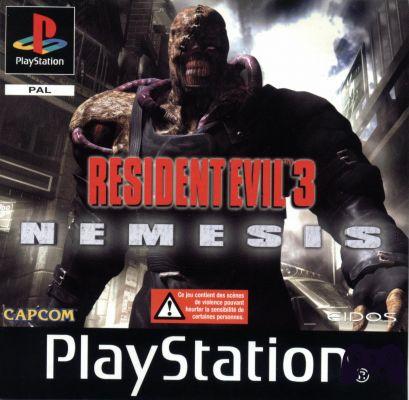 Raccoon City is increasingly ravaged by the virus, Jill Valentine she intends to escape from the chaos and destruction caused by Umbrella, however it is not that simple. The American government is in fact intent on wiping out the entire city by dropping a nuclear bomb, eliminating viruses and zombies in one fell swoop. L'Umbrella Corporation however, he created Nemesis: an infected being in charge of killing all the survivors of the STARS team, this being in fact will haunt Jill during the entire duration of the game, chasing her literally everywhere. The episode will end with the destruction of the city by a nuclear device and with the escape of Jill. 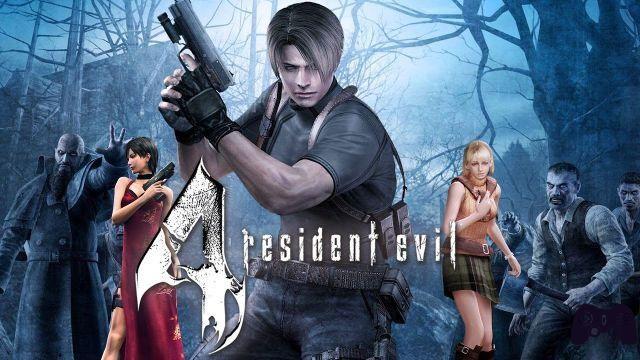 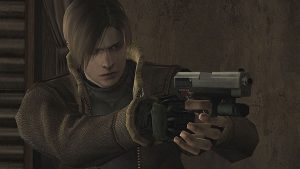 The game is set in 2004 and begins with the dissolution of the Umbrella Corporation. The game is focused on the mission of Leon Kennedy, who has now become a government agent, hired by the president of the United States to find his daughter Ashely Graham, kidnapped by a Spanish terrorist group, which later turns out to be a sect called Los Illuminados. The sect has awakened an ancient parasite called Las Plagas and intends to use it to conquer the world by transforming the population into violent killers and superhuman strength. The Illuminados have kidnapped the US president's daughter for two purposes: to obtain a $ 20 million ransom from the president to mobilize their army, and to infect Ashley so that she is the one who spreads the virus in the United States. The head of the sect is an individual known as Lord Osmund Saddler, and is worshiped as a god by his followers as a healthy bearer of the Plaga Leader which he is able to control. Leon will find himself facing filthy monstrosities created with parasites by the sect, also learning about Albert Wesker's plan to take over the Plagas to turn them into biological weapons. Eventually Leon will be able to save Ashley, the president's daughter and eliminate Saddler himself, now mutated into a monster, thwarting the sect's plans to conquer the world. Ada Wong however, he will manage to steal a sample of Plaga Leader developed by Saddler's researchers, presumably to deliver it to Wesker and allow the birth of new monsters. Leon will complete the mission by bringing the president's daughter back home safely. 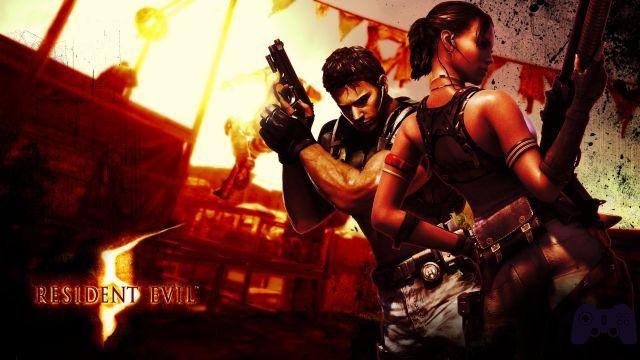 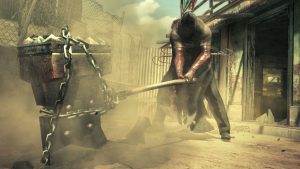 The title takes place five years after the events of the previous chapter, Resident Evil 4 and eleven years after the events of Raccoon City of 1998. This chapter is set in 2009 and marks the return of Chris Redfield, former agent of the STARS and who is now part of the organization BSAA engaged in destroying all biological weapons in circulation. Chris is sent to Africa where a biological weapons exchange is supposed to take place. Arriving in the village of Kijuju, Chris meets his new partner Sheva Alomar, and together they start looking for clues to uncover the truth about a new virus called Uroboros. The enemy of this chapter of the saga is the revived Albert Wesker, who in the finale uses the Uroboros virus to transform himself into a monster. Sheva and Chris manage to defeat him by sinking him into the lava and escaping in a helicopter. Wesker will try to stop them, but with a double blast from the rocket launcher Sheva and Chris will kill him by decapitating him and causing him to explode. 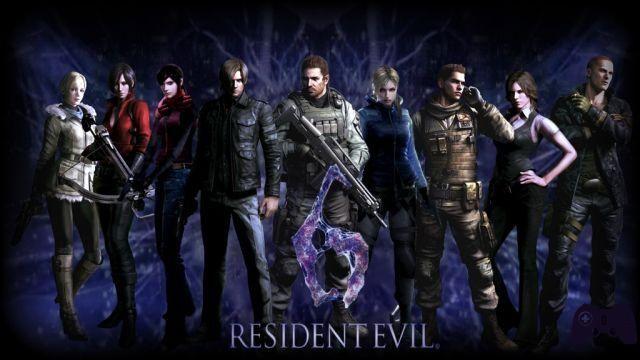 This chapter takes place between the end of 2012 and 2013. The protagonists are Leon Kennedy, Chris Redfield, e Jake muller, son of Albert Wesker. Each of them has a partner, respectively  Helena Harper, Piers Nivans e Sherry Birkin, the latter is the little girl Claire saved during the tragedy of Raccoon City, grew up and became a government agent. The game is about the bioterrorist attack carried out by the Neo-Umbrella, a bioterrorist pharmaceutical company that with the help of Derek Simmons created a new pathogen called C-virus with which it spread a large-scale epidemic in the city of Tall Oaks, in Edonia and in China. The effects of this virus vary according to how the infection is contracted, it can cause it to turn into a zombie if it is inhaled, or into J'avo if it is inoculated. J'avos are humans infected with intelligent, shapeshifting C viruses, while zombies are similar to those created by the T-virus, except that they have mutations that make them more dangerous and resilient. It will be up to Leon, Chris, and Jake, flanked by their respective companions, to thwart the bioterrorist attacks by Neo-Umbrella and Simmons, and to find the key to defeating the new dangerous C virus that threatens the existence of all humanity. Jake is the only one to be immune, therefore the only one who can create a vaccine against the virus with the use of his blood. 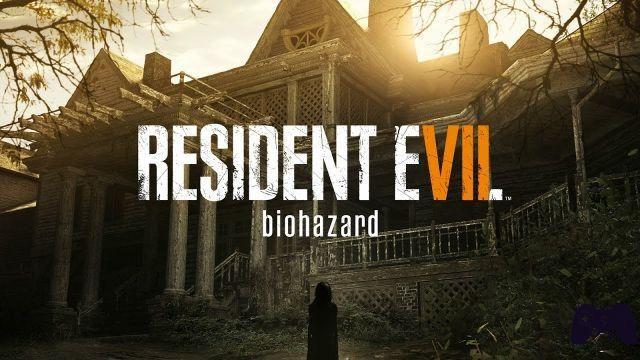 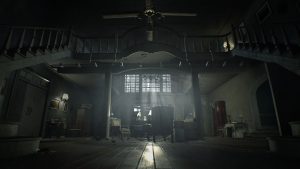 Resident Evil 7 is set in 2017 and the protagonist, Ethan Winters he has just left for a long journey to Louisiana to find his wife Mia, who sent him a suspicious help message after mysteriously disappearing three years earlier. The woman is trapped in an abandoned manor on the shores of the bayou, a remote place where, according to some rumors, ghosts roam and where several disappearances have been recorded.
The old house was the scene of a past tragedy, the entire family who lived in that ancient place, the Bakers, was in fact infected with a strange fungus, which made them immortal and was driven mad. Mia is also a victim of the same parasite, losing her mind and falling under the yoke of the Bakers. 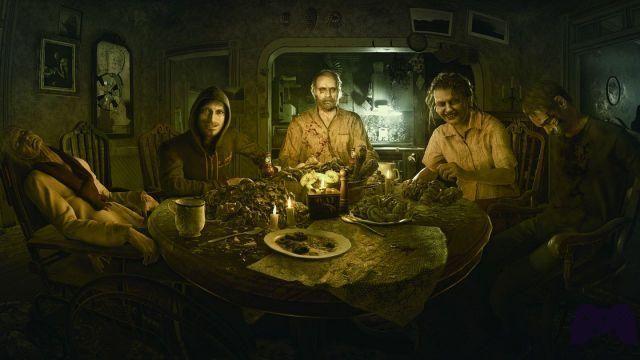 Ethan manages to find his wife, but has the unpleasant surprise to find that she has gone mad, and from now on he will attempt to free her, but will be haunted by all members of the Backer family (including the wheelchair-bound grandmother, who will appear in the worst moments, even causing jump scare). The Backers will use some corpses brought back to life through the parasitic fungus, called micromorphs, 2-meter monsters with superhuman strength.

Ethan will be supported by Zoe, the only Backer daughter who hasn't lost her mind, and who is intent on ridding the family of the parasite. Zoe will reveal to Ethan that the parasite that infected the Baker family was passed on by Eveline, a little girl who was rescued by the Backers, but who turns out to be a bioweapon as well as her wheelchair-bound grandmother. The epilogue will see Ethan, save Mia, and along with Chris Redfield defeat Eveline.

Stay with us for more news on the Resident Evil saga

Do you want to be a video game expert and know all the tricks, guides and reviews for your video games ? Holygamerz.com is a group of video game fanatics who want to inform you about the best tricks, guides and tips. We offer you the best information to be a reference in gaming, so here you can find guides, tricks, secrets and tips so you can enjoy your games to the fullest. Are you ready to get all the achievements of that game that you resist so much? Enter now and enjoy your favorite video game to the fullest!
Special Reform or psycho-reform of articles 11 and 13 ❯

Fortnite special against Apple, but the fault lies with TikTok

Watchdogs Legion Special: Anyone is Anywhere

Add a comment from Resident Evil Special: The Story So Far