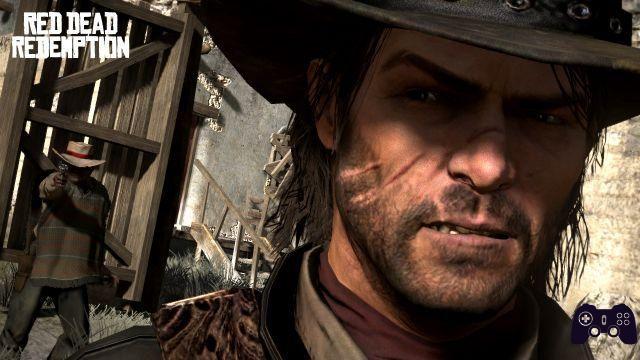 What a fascinating period, the old west, a source of inspiration for dozens of films, but a few times for video games. The guys of Rockstar San Diego have noticed this, and have given birth to Red Dead Redemption, a complex, mature, but at the same time fun and hilarious game. An exciting game, which excites you during the adventure, and which therefore manages to catapult the player into the spaghetti western atmosphere that the game masterfully recreates.

We are in the American frontier at the beginning of the twentieth century, that is, at the end of what the Old West was, and we should juggle a thousand ups and downs.
During the adventure you will play the role of former outlaw John Marston, on the trail of his former comrades, now hostile towards him, considering him a traitor. Of course ours will have to overcome really hostile situations but, in spite of the previous protagonists of the Rockstar titles (see Niko Bellic in Gta IV), John is much more human and emotional, an element that manages to make us fall more in his shoes.
We will meet several curious characters, which denote the inevitable Rockstar style in outlining the character of the characters, some really nice, others a little less, but all with a different personality to be discovered.
You will be assigned various tasks to complete, divided into primary and secondary: the primary missions advance the story, while the secondary ones can be completed at any time and in most cases are assigned by strangers, who will also 'they have their own complex personality.

As per the tradition of Rockstar titles, Red Dead Redemption is a free roaming adventure, that is, with an open environment that can be explored at will.
The developers have been able to fill the square kilometers of which the map is expertly composed, and you will hardly have a feeling of already seen by exploring the game environment.
The map will be divided into three zones, New Austin, Nuevo Paraiso and West Elizabeth, which will be unlocked one by one during the videogame experience. Your main means of transport will be the horse, but you can also travel in stagecoaches.
A fame bar thinks about renewing the genre, which I now illustrate to you: every action you perform in the course of history will positively or negatively affect your fame, so you can decide whether to be paladins or scoundrels; the former will be treated positively by the law, which will accept some minor offenses, and some shopkeepers could make some discounts on goods; the latter on the contrary will arouse terror in people, who will run away when they see you, and the sheriff will not give you respite.
Another innovative element is definitely the Dead Eye, which consists of a sort of Bullet Time, in which you can aim various enemies together with your weapon. In the game there are weapons for all tastes, and no one will be disappointed, even the less experienced, in fact the game will offer three levels of aim: Amateur, Normal and Expert, to go against even casual gamers (to fully enjoy the missions I advise you to put expert level right away, a fair experience is enough).
The gameplay is therefore very varied, and to all these features listed above there are challenges: in fact, in the map there are different types of animals, which can be skinned and then sell the skins, and different types of herbs; the challenges consist in knowing the animals and the position of some herbs, in fact they do not shine for variety but for longevity, but some challenges will offer you to disarm a predetermined number of enemies without reloading, which is not easy (there are different types of challenges).
The controls are excellent, but not very easy to master, in fact you will have some episodic difficulties.

Technically, the Rockstar San Diego title is excellent, the graphics engine is the same used for Gta IV, with some improvements, and the frames per second are sufficient to guarantee excellent fluidity, so you will very hardly see frame rate drops.
The definition is very beautiful for the eyes, and the environments are composed of a small number of polygons, but the thing that amazed me most is the accuracy with which the protagonist and his steed were drawn, truly amazing.
The only not exactly positive note is the sound sector, certainly not at the levels of Gta IV ... The title offers beautiful music, but it stops there, since there is no excellent song, but nothing serious, the general level of the sector sound is however quite high.

Once the story is over do not think you can put aside the blu ray, because this game enjoys a great online mode!
The latter is as varied as the offline and is divided into different modes that I am going to list: there will be the free mode, where you can freely explore the map with other people (including friends of course) and conquer some lairs, thus forming a band ; then there will be the classic team deathmatches and free-for-all (they will not have this name, but the substance is this) and also modes where you have to defend the loot and / or try to take the opponent's one and bring it to your base.
In these modes you can decide whether to use normal or expert aim, and only in dedicated deathmatches can you use the amateur one; progressing through the levels (I also remember that there is a leveling system) you will unlock special modes, always deathmatch and free-for-all, in which only expert aim is allowed.
To add to these excellent features there is the possibility to assign a "title" (you know those of modern warfare 2?) And to choose a character, among a wide choice (ranging from lawmen to herders).

Verdict 9/10 We want Django in the sequel! Comment With Red Dead Redemption we are faced with a mammoth title, a title that everyone should have, a title that you will not forget, a title that has established itself in the videogame epic, leaving an indelible mark. Pros and cons ✓ Engaging story
✓ Well characterized characters
✓ Excellent graphic sector
✓ Very high longevity
✓ Fun online mode x Mediocre sound sector
x To avoid if you hate GTA and similar

Do you want to be a video game expert and know all the tricks, guides and reviews for your video games ? Holygamerz.com is a group of video game fanatics who want to inform you about the best tricks, guides and tips. We offer you the best information to be a reference in gaming, so here you can find guides, tricks, secrets and tips so you can enjoy your games to the fullest. Are you ready to get all the achievements of that game that you resist so much? Enter now and enjoy your favorite video game to the fullest!
News Super Neptunia RPG will arrive in the West in 2019 ❯

Temtem | The analysis of the PlayStation 5 version