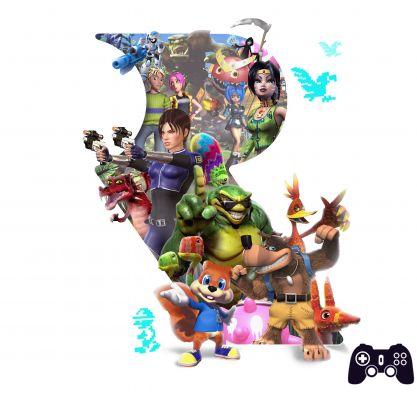 On the occasion of 'E3 2015, to celebrate its 30 years of activity, Rare presented to the public of the Los Angeles fair, the Rare Replay, a collection of 30 titles from the English software house that celebrates its 30th anniversary. At a cost of € 29,99, € 1 per game, Rare Replay is available from August 4th exclusively on Xbox One.

Rare has created a product that goes beyond the banal collection

30 years in the gaming field are an eternity. In all this time, important, epochal changes have taken place, new technologies and new ways of creation have developed. Also the very concept of video games has changed, from a product for the spectacled nerd to a cult object destined for the big market and millionaire businesses. And in this process of changes and evolutions Rare has contributed over the years with its production to make the history of the video game, forever marking some fundamental moments in the life of all of us players.

To celebrate the history of Rare, here is a collection of the most famous titles, 30 games that in one way or another represented a period, a phase of Rare and its vision of the video game. It would have been enough to put together a handful of titles and perhaps, given the trend of recent years of collections and remastered, we would have been satisfied. But Rare wanted to do more precisely to celebrate itself, creating an entertainment product that went beyond the banal collection and here, between one title and another, it will be possible to spend time viewing an entire evening of video-documentaries dedicated to the software house and its production, where told anecdotes on the development, personal stories of the various team members and numerous curiosities that often those who play neglect or do not know, increasing the value of this collection especially from the nostalgic side and that will gradually become available by playing everything there is in this selection. Not only, Rare Replay is sold at a very attractive price, a factor that allows you to recover games otherwise unavailable or in some cases with a decidedly prohibitive cost, victims of certain torturers on second-hand trading sites with the minimum cost.

I have abounded, what am I leaving?

The games featured in Rare Replay range from all-round Rare production and provide us with a clear and concrete idea of ​​the stylistic evolution of the English house.

They range from games created when it was still called Ultimate Play The Game in the period of Z like Jetpac, Saber Wulf o Knight Lore real milestones of the arcade genre, to pass the era NES, where we find Battletoads, the scrolling fighting game with the famous anthropomorphic frogs (to date one of the most loved and requested Rare titles for a sequel), the puzzle game Snake Rattle 'n' Roll, or the frenetic racing RC Pro-Am and its sequel. There are also pearls destined for the arcade market, such as Killer Instinct Gold o Battletoads Arcade. 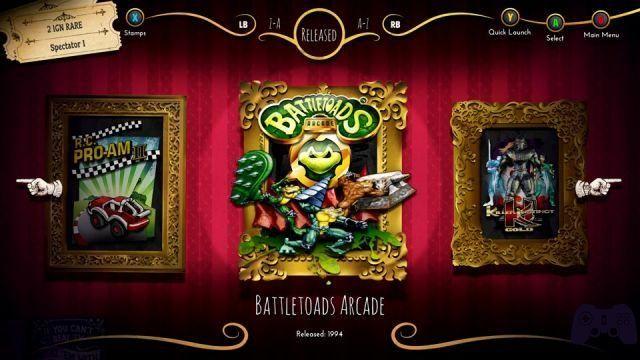 We then arrive at the stage of Nintendo 64, one of the high points in the history of Rare, where we find immortal and timeless titles like the two chapters of Banjo & Kazooie, the irreverent Conker e Perfect Dark, one of the FPS (along with GoldenEye 007, absent here) has laid the foundations for a genre that has struggled to spread and be appreciated on consoles, even anticipating the revolution of Halo. The last part of the Rare Replay is dedicated to the world Xbox, after the divorce with Nintendo and the acquisition by Microsoft products, with the presence of the underrated Grabbed by the Ghoulies, the troubled Kameo: Elements of Power and the controversial sequels to Perfect Dark and Banjo, Perfect Dark Zero e Banjo Kazooie: Nuts & Bolts, crushed by the weight of the expectations and the legacy of the founders.

If I Could Turn Back Time

What you're probably wondering is how Rare's selected games have stood the test of time. It must be said that older titles are likely to appeal more to that category of nostalgic and "hardcore" players who are not intimidated by punitive or (nowadays) immature gameplay. Some titles, such as Conker, are affected by the addition of the second stick in the controls for managing the camera, which cannot be reversed, making some steps uncomfortable or literally making it “crazy” in certain situations. But otherwise, years later, especially older titles still show the polish of the past and, more importantly, they still have a lot to say despite the years since their release.

The collection has been enriched with useful features

Being a "simple" collection, the games featured do not show any kind of graphic rehash, if not only the upscale of games at 1080p. To sweeten the pill of the most "old" titles and modernize them, some interesting features have been added. The first is that of Snapshot, a mode that follows the dynamics seen in Nes Remix: selecting a game it will be possible to choose some challenges, which will range from completing a level within a time limit or killing some enemies without getting hit and so on. These challenges will be linked to an online leaderboard and it will be possible to play playlists with multiple tests with which to test your skills.

Also for older titles (basically those before the Xbox period) an option can also be activated that allows you to apply a filter to the graphics that simulates the effect of a CRT TV, or for those games in 4: 3 format you will be able to fill the blank screen areas with illustrations. Ultimately we find two other functions that will lighten the life of us poor players: the ability to save the game at any time (for games without a save game, similar to what happens on the Virtual Console Nintendo) and the option Rewind, which allows us, for example in the event of an error, to rewind the game by changing the outcome of the game. Then, fiddling with the options of the individual games, in those that involve their use, it will be possible to make changes, such as activating cheats or increasing the number of available lives. 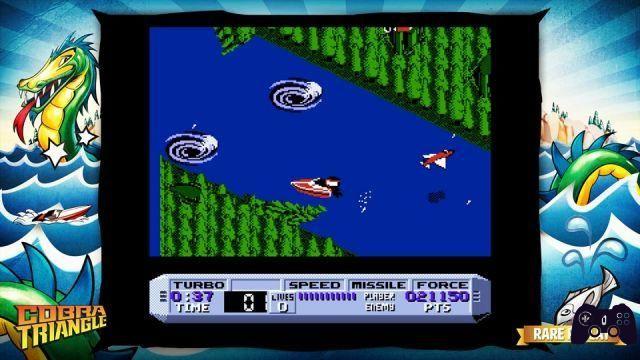 The games in the collection released on Xbox 360 will be installed in a stand alone way, taking advantage of the new backwards compatibility of Xbox One and they can be played independently without being tied to Rare Replay, with the ability to uninstall the other titles in the package and save space on the HDD if needed. Another possibility offered by Rare Replay for the Xbox 360 software is that of being able to recover old saves via the cloud and thus resume games start on the "old" Microsoft console. Then activate all the online services dedicated to multiplayer (if present in the original game) and support for Objectives, for a total of 10000 player points, which will keep gamescore maniacs busy for a long time.

Many of the most famous and important titles are missing from Rare Replay and the reason is due to the licensing factor that binds the titles in question to their owners. In fact, we will not find any games related to Donkey Kong, like the series Country or the chapter released on N64, or the aforementioned GoldenEye 007 whose rights are currently in the hands of Activision, or again Star Fox Adventures, also from Nintendo. Other great absent the various Kinect Sports e Adventure, most likely to make Rare Replay accessible to gamers without the Xbox motion peripheral.

Verdict 8.5 / 10 Polystation has more games and costs less Comment What about Rare Replay. It is a collection worthy of the name, a cross-section of videogame life that embraces 30 years of masterpieces (and not) of the English softare house, and that gives everyone, old or new players, the opportunity to put their hand to some of the titles that have marked history. Unfortunately, a collection that is not complete (as we have had ways of discussing in review) but able to meet everyone's needs and which hopefully will be expanded and deepened over time. An operation this time to mainly enhance the games, thanks to the numerous extras included and ultimately, to do justice to Rare Replay we find an honest price, 30 euros for 30 games. What more could you ask for? Pros and cons ✓ 30 great games at 1 Euro each
✓ Numerous extras to unlock
✓ Exclusive features for older titles x However, many of the Rare hits are missing due to the rights
x Time to complete is sold separately
x It's Mr. Pants is missing
Do you want to be a video game expert and know all the tricks, guides and reviews for your video games ? Holygamerz.com is a group of video game fanatics who want to inform you about the best tricks, guides and tips. We offer you the best information to be a reference in gaming, so here you can find guides, tricks, secrets and tips so you can enjoy your games to the fullest. Are you ready to get all the achievements of that game that you resist so much? Enter now and enjoy your favorite video game to the fullest!
Old Tech PC? Linux takes care of it! ❯