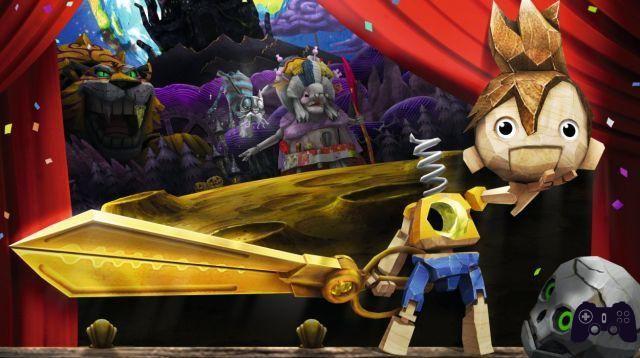 This year we have seen several platformers on our consoles: from the indie cowboy of Gunman Clive on 3DS to Bob's debut in the difficult Cloudberry Kingdom, from the jumping rabbit of Kung Fu Rabbit up to the return of Rayman in Rayman Legends and that of Luigi in New Super Luigi U.
And here is that to this chaos of protagonists is added the little Kutaro, the main character of Puppeteer, new game from SCE Japan Studio directed by Gavin moore, exclusively for PlayStation 3, now on physical and digital shelves at the budget price of € 39,90.

The baby and the scissors

The goddess of the Moon was betrayed and defeated by King Bear, who has since dominated the entire earth satellite, subjugating it thanks to his 12 generals.
Each night, the souls of several children are stolen and turned into puppets: the lucky ones become the tyrant's servants, while the others lose their heads and turn into cruel purple larvae.
Unfortunately, Kutaro is part of this second group: his head was in fact eaten by the King; Fortunately, while waiting to mutate in the dungeons of the castle, he meets Ying Yang, a magical cat in the service of the witch Ezma Potts.
The feline gives him a temporary head explaining that, thanks to magic, the young man could save the moon and its inhabitants. In addition to the heads, however, a specific tool is needed: Calibrus, the legendary scissors.
After having managed to get the legendary scissors, the puppet sets off on his adventure, flanked first by Ying Yang himself and then by the sweet Pikarina (of which we won't tell you anything else so as not to ruin anything). On his way he will meet the 12 generals of the Bear King and more than 100 different heads, each with a particular ability, although not all very useful.
Kutaro's adventure unfolds into seven acts, each divided into three scenes. It can be completed in about ten hours (which will double if we decide to hunt the extra heads nd Guido), the story is masterfully told as if it were a theatrical show, with a narrator pulling the strings and continuous references to literary works and ruptures of the fourth wall.
Each character has its own role and is characterized down to the slightest seam, offering one of the best storylines ever seen in a platformer, with twists (predictable or not) that will kidnap the viewer by gluing it to the joypad.
Each time an act is completed we will unlock an illustrated book which, with a short story told through moving drawings, will reveal further background and leave the viewer amazed by completely unraveling the Puppeteer plot.

One, ten, a hundred heads

The main objective of Puppeteer is to get Kutaro safe and sound to the end of the scene, jumping obstacles, defeating larvae (and freeing the souls of the children enclosed in them), collecting moon sparks and passing through fairy portals, all cutting cardboard and cloth thanks to Calibrus. As long as we cut something Kutaro can remain suspended in the air, and here we find the only flaw in terms of gameplay for the new Japan Studio title: the jump / cut in the air with Calibrus is initially woody, and we will have to get used to it before getting used to it completely. to the technique; so don't get down on yourself if you find yourself dying from a badly successful cut or jump rather than from enemy blows.
In addition to the magical scissors, during his adventure Kutaro will be able to use four special heads (each assigned to a different button), which belonged to the Paladins of the goddess of the Moon: with L1 we will be able to parry the blows thanks to the Knight's shield, with a circle we will be able to throw bombs thanks to the skills of the Ninja, with the triangle we will be able to drag enemies and objects towards us using the Pirate's grappling hook and finally with R1 we will be able to move blocks and give powerful heads from above with the strength of the Fighter.
The four special heads will not only be used to discover secret places in the levels already completed, or to continue in the new ones, but they will also be useful during the final stages of the battles against the Bosses: in the final stages of each battle we will have to press the right button during a Quick Time Event series that will lead the young Kutaro to victory.
In addition to the four heads of the Paladins, Kutaro will be able to carry a maximum of three additional heads collected during the levels: these can be found by moving Pikarina or Ying Yang in the game area (monsters included), or by hitting the floating magical cauldrons.
The collected heads all have a particular animation, which can be activated by pressing the down key of the directional cross, when the drawing of the head appears in the background: it will be an invitation to try the skill, activating secrets of the level or bonus scenes. For example, to silence Dracula we can use the breath of the garlic head, or we can conquer a young snow woman thanks to the Yeti head, and get carried away in a bonus level full of sparks to collect (there is a bonus scene in each game level, also replayable from the main menu nd Guido).
Every time Kutaro is hit he will lose his worn head which, if not recovered in time, will disappear into thin air; should the puppet lose all the heads in his possession, he will be catapulted off the stage, where he will be given a new life thanks to the lunar sparks collected previously.
It has never happened to us not to have extra lives available, and therefore to reach the fearsome Game Over. Indeed, we have completed the story of Kutaro with more than 50 extra lives (and we have lost many due to the woody leaps of Calibrus nd Guido) thanks also to the multitude of sparks present in each level; all of this makes Puppeteer's level of challenge very low but does not undermine the enjoyment of its storyline.

Help me that Sol helps you

In addition to Kutaro, we will also wear the role of Ying Yang and the young Pikarina, both will be the explorers of the group, and we will be able to move them on the screen thanks to the right analog; pressing R2 instead, we will explore the scenography, revealing sparks and new heads for the young Kutaro.
Unfortunately, everything is chaotic during the excited sections (especially during the Calibrus horse races) and it will happen to forget to analyze a certain area, focusing on the survival of the young puppet without a leader.
Fortunately, Japan Studio has thought of a remedy, introducing a two-player local co-operative mode, in which the second will take possession of the helper, moving the key to control the environment from R2 to a circle.
The second player can also collect the sparks for Kutaro, then pour them on the child, guaranteeing even more extra lives than the sigle player mode; or he can purify the larvae by transforming them into further heads for our hero, drastically reducing even the defeats.
Taking on the show with a friend makes Puppeteer even easier and is only recommended as a second option, to collect any lost heads in the first adventure or to find the bonus scenes.

In addition to the plot, Puppeteer excels stylistically: each character, environment or event is treated as if we were witnessing a real puppet show, with falling sets, painted backgrounds and threads to support the clouds.
Kutaro and his companions do not seem human, but wireless puppets, which move on the stage surrounded by the classic red curtain.
The effect gives the graphics sector a unique original aspect, surrounded by the excellent Spanish dubbing (with a couple of exceptions) and by the noises coming from the audience in the room.
The narrator gives the final touch to the work and, as mentioned at the beginning of the review, ties the scenes together and entertains the audience with shrewd jokes, piercing the fourth wall several times. All this merges with a series of orchestrated songs, directed by Patrick Doyle, creator of many film soundtracks.
The entire game also supports stereoscopic 3D which, thanks to the fixed camera on stage, does not impact the framerate and offers, on supported televisions, a further addition to the technical sector.

With Puppeteer, Japan Studio manages to pack a simple platform with dark tones, which will still be able to snatch a few laughs from the player, without boring him with difficult sequences but consequently also without giving him a real challenge.

Verdict 8.5 / 10 The most ignored title of 2013 Comment The first thing that springs to mind after completing the Puppeteer adventure is certainly linked to the platform on which it did not come out: the title would probably have given new life to PS Vita, if it were been published for the latter. A September release, albeit at a budget price, close to the return of Rayman and a few months after the launch of the PlayStation 4, with all the Sony marketing linked to the latter, will probably undermine the sales of Gavin Moore's puppet theater. but the title is certainly not to be underestimated, thanks to a mature plot (although it may not seem like it) and never seen in the platform genre and the original visual style with which Puppeteer shows itself to players. Kutaro is adorable, and the animations of each head will make the little ones smile, while the older ones can laugh with Pikarina's acid jokes and find quotes from many fables and literary works. The problem of the almost non-existent difficulty is set aside to make room for the story, already mentioned too many times, leaving the player at the end of the show very satisfied with what has been seen. Japan Studio showed us a new way to offer platformers, which we hope will not go quietly and will return to our consoles as soon as possible, perhaps in the new generation. Pros and cons ✓ Story told in an original way
✓ Outstanding graphic style x Jump with woody Calibrus
x At times all too easy
Do you want to be a video game expert and know all the tricks, guides and reviews for your video games ? Holygamerz.com is a group of video game fanatics who want to inform you about the best tricks, guides and tips. We offer you the best information to be a reference in gaming, so here you can find guides, tricks, secrets and tips so you can enjoy your games to the fullest. Are you ready to get all the achievements of that game that you resist so much? Enter now and enjoy your favorite video game to the fullest!
Hyperdimension Neptunia Re Review; Birth3: V Generation ❯