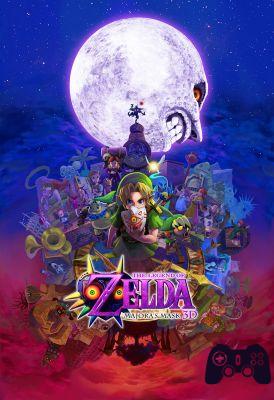 The Legend of Zelda it is certainly one of the flagship series of Nintendo, and except in rare cases the main chapters of the series have never disappointed and very often have managed to bring other gamers closer to the consoles of the Kyoto house.

In 2000, thanks to the success of Ocarina of Time, Nintendo EAD proposed to the general public The Legend of Zelda: Majora's Mask, a direct sequel to what for many is still the best game ever.
Majora's Mask had the burden of collecting this legacy and carrying it forward, offering players a challenge against time to save Termina from impact with the moon.
The darker storyline wasn't the only innovation of the second 3D chapter of the series, a complex system of subquests made Majora's Mask one of the most loved chapters by critics and fans.
The same fans who loudly, after the convincing Ocarina of Time 3D, began to insistently ask for a remake for 3DS, a sweaty desire for the past five years and which is finally a reality.
These days we got our hands on preview The Legend of Zelda: Majora's Mask 3D, and we're ready to give you our first impressions of Link's return to Termina.

Dawn of the third day

For those who only know the title of Majora's Mask, the plot is soon written: after the events of Ocarina of Time, Link leaves Hyrule to look for Navi, and together with Epona he meets a masked "goblin" who, after having stunned him, steals him. horse and ocarina. The young hero sets out in pursuit of the one who turns out to be the main antagonist of the title, the Skull Kid, who thanks to the mysterious mask transforms Link into a Deku bush.

A darker and grimmer Zelda

Skull Kid has with him two fairies similar to Navi, Tael and Taya (Tatl in the original version), the latter will stay behind and decide to join the hero of the time when he understands the true nature of the mask.
Link Deku and his new partner will chase the swindler up to Cronopoli (Clock Town) capital of Termina and true hub of the game's activities.
The first hours of Majora's Mask are a succession of events that will put you in front of a real challenge against time: Link will in fact have three days to prevent the Skull Kid from crashing the Moon on the city. But this is only the beginning: once the Ocarina has been recovered, the hero will be able to go back in time and retrace the past three days again, in a continuous loop until he can stop the enemy once and for all.
We will talk about the concept of time in Majora's Mask in the review phase but, it is right to point out for those who have never approached the chapter, that we are faced with an atypical Zelda, very different from the normal canons of the Nintendo series. A darker and gloomy Zelda that will put the novice player to the test several times.

The new clothes of the Skull Kid

As with Ocarina of Time 3D, this remake of Majora's Mask also comes with an exceptional graphic upgrade, managing to rival the best titles for the Nintendo laptop.
The visual sector gives new lifeblood to Termina, also thanks to a 3D effect that will give the best on New3DS where, thanks to Head-Tracking, it will probably no longer cause nausea and pain in the skull.
Among the novelties that we have been able to ascertain in these first hours of play, we certainly find the Bomber's Notebook, which now in addition to providing clues on how to complete the secondary missions, offers the player a complete calendar of NPG actions by reporting what they are doing during the requested time.
This addition could facilitate the completion of some missions but, even in this regard, we will go into more detail in the review phase.
Directly from Ocarina of time 3D e Skyward Sword we also find the Sheikhan Stone, renamed by the Zelda fandom the "Noob Stone" that will guide the most incapable player step by step in the fulfillment of the adventure.

Comment After years of waiting Majora's Mask is back, in a new version that looks better than the original. Thanks to the graphic renewal, Termina is more beautiful than ever, and we are sure it will also win new fans who have approached the series only in recent years. It remains only to wait a little less than a month, to be able to find out if the wait for this remake will be repaid in all respects. To conclude a small note from Fan of the chapter: The Sheikhan Stone is in my opinion an abomination, even if strictly speaking one is not forced to use it, but the mere presence is an insult to those who in 2000 (or in one of the other versions) have 100% completed Link's adventure in Termina without resorting to these means; one option would have been enough to disable it and not have it constantly staring at us every time we return to the clock tower. Pros and cons ✓ Graphically among the best on 3DS
✓ Improved Bomber Notebook ... x ... although it could facilitate subquests

Do you want to be a video game expert and know all the tricks, guides and reviews for your video games ? Holygamerz.com is a group of video game fanatics who want to inform you about the best tricks, guides and tips. We offer you the best information to be a reference in gaming, so here you can find guides, tricks, secrets and tips so you can enjoy your games to the fullest. Are you ready to get all the achievements of that game that you resist so much? Enter now and enjoy your favorite video game to the fullest!
Super Mario Maker preview ❯

Add a comment from Preview The Legend of Zelda: Majora's Mask 3D