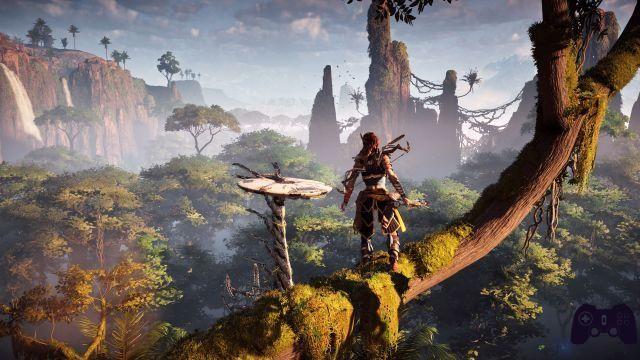 When you think of the PlayStation brand, the internal studies that come to mind, in most cases, are two: Naughty Dog (which for Sony users was a bit of the hen that weaned them, taking them from Crash Bandicoot to The Last of Us) and Santa Monica, who with his God of War has conquered the generation of PlayStation 2 and led Kratos, waiting for some details on the next chapter, to close his first odyssey on PlayStation 3. But not for this we must forget the contribution, at times fundamental (especially when looking at the beginning of this generation) of Guerrilla, a study that despite living a bit in the shadow of the other two teams mentioned has always shown that it knows where to put your hands when it comes to pushing, whether it is portable or home consoles. Horizon: Zero Dawn it is in a certain sense the test of maturity that, in March 2017, the Amsterdam software house will have to endure by abandoning the Killzone series for the first time in thirteen years. On the occasion of this year's Milan Games Week we were able to participate in a live gameplay session followed by a direct road test: the signals? Definitely positive.

Rumbles of thunder and skies of fire

Aloy's story has a lot of potential

Already from the first statements of the Horizon developers: Zero Dawn has never hidden the claim of wanting to tell a story and describe a world at the same time future and past: about a thousand years after the era we are living in, in fact, nature has reclaimed its spaces again and in parallel man has lost his position of dominant species on the planet, yielding not only under the blows of Mother Earth but also to the offensive of some mysterious machines that have made survival a goal to be pursued and no longer a given aspect almost for granted. In this frame Aloy moves, determined to understand the reason behind the behavior of the machines and the causes that have brought humanity to this point, and for this very reason put on the sidelines and practically treated like a madman by her people.

It is too early and there are still few elements to say whether Guerrilla will be able to deliver on his promises made from the point of view of storytelling: what is certain is that the game world, which, film after film and interview after interview, has certainly a lot of potential on this front and all the credentials to be able to bring home a result that, managing well the elements seen up to this moment and convincingly building all the part of the background that has led the world we know to become the one in which lives the girl, it could translate into a definitive qualitative leap for Guerrilla. Excellent confirmations also as regards the character design of the characters (in particular of the creatures that will be forced to face our beloved Aloy) and which seems to lead back to a varied fauna and designed to have a role within the game world based on to your appearance. The gigantic giraffe-like creatures, for example, will act as real mobile antennas and can be scaled to discover the various play areas, while creatures with a design similar to that of crabs (which we found ourselves facing during the demo ) will deal with the recovery of supplies and materials. Ultimately, even after a few minutes of play, you can realize the precision work carried out by the Guerrilla guys on the game world which, in all respects, proves to be alive and credible.

I didn't mean the one with "mechanical bull"

Quite derivative gameplay, but undoubtedly solid waiting to see how it will evolve on the RPG front

On the playful front, the developers have never hidden that they have taken, as points of reference, the Assassin's Creed series (a real playful phenomenon of recent years), Far Cry Primal (complete with mount) and The Elder Scrolls V: Skyrim by Bethesda. The result is to find, pad in hand, in front of a familiar product as regards the controls, which Aloy can use a sort of "eagle eye" to scan and locate the enemies present within a certain radius, and then be able to try a more reasoned approach based on traps and ropes to trap the prey on duty or decide to attack from the chest right away, using the spear for the melee (which can perform lighter and faster attacks or heavier, but expensive from a loading point of view) and the bow for wounding from a distance. Once the mechanical prey has been immobilized and, possibly, the air has been freed from any danger factors that can interrupt the operation, it is possible to perform an Override maneuver, which essentially transforms the machine into a useful ally to be used as a diversion, as a companion or (in the case of some bull-like creatures) as a mount to travel faster long distances. During our test we were also able to touch some of the crafting mechanics, which allow to build (starting from the materials collected from the metal carcasses) the tools to be used during the hunt, sometimes characterized by an elemental effect that affects the target, if it is sensitive to that type of attack. The AI ​​of normal enemies, however, seemed to us quite well done in its having to (want?) To be a prey or at least a not so oppressive danger. However, there was no lack of opportunity to compete with a creature of greater tonnage, with which the fight was undoubtedly more demanding: we could see how it was possible to weaken the machine by attacking some specific parts, preventing it once the component was destroyed from carrying out some attacks, while it was necessary to try to keep distance by exploiting the tamed "horse" previously to avoid being crushed under the weight of the mechanical beast. Nothing, as expected, unprecedented with regard to the world of video games, but no less appreciable from a playful or mechanical point of view: the ten minutes spent in the company of Horizon did not show us anything that we had not already been able to try in some other title, but anyway the formula seemed to us to rise to the occasion and the gameplay, waiting to discover the actual depth of the level up system and which skills hide the more advanced levels, solid.

Better than a shampoo ad

Some flaws, but jaw-breaking effect guaranteed

From a technical point of view we were able to find, once we arrived at the station and left free to explore the demo area, some imperfection: the "curse of the horse" also seems to affect Horizon, and in general while you are in the saddle you can witness some anomalous behaviors (for example, going down while you are in the water the camera cannot keep an eye on the player and the title , for a few moments, behaves as if the player were on land). In other circumstances, however, it was the frame-rate that uncovered the side, recording some drops during the most excited phases (especially when it comes to melee with enemies). Having said this, however, on the visual front we can only applaud the small miracle performed by Guerrilla, which in fact has created a title that can sometimes gamble almost on par with the Uncharted 4 graphics benchmark with the plus of immersing the player in an open world context: in short, even with the benefit of the doubt with respect to the hardware (we do not know if what we saw ran on Playstation 4 or on the new Pro model) and despite some flaws to put a patch on Guerrilla has undoubtedly lived up to her fame, not betraying expectations.


Comment Horizon: Zero Dawn seems like a more than solid candidate for the game title of the PlayStation 2017 videogame season: Guerrilla did not invent anything, but he has undoubtedly done his homework and has put on the plate a narrative universe that can evolve in directions definitely interesting, a solid gameplay and suitable for the context and a technical sector that, despite some defects (very limited from here to the exit) has practically left us speechless.
Pietro Iacullo If I had to bet on a (robotic) horse for next year's best title race, at the moment Guerrilla would have my money with his Horizon: Zero Dawn. The Amsterdam team seems to have understood that, to create an excellent game, you don't necessarily have to innovate, but "just" push all the playful features already on the market to the maximum. In fact, Aloy's adventures seem to be just that: an open world adventure curated in every single aspect and with the most fascinating character design of recent months (if not years). The future, however primitive and ruled by gigantic robotic creatures, has never looked so good.
Luca Mazzocco Pros and Cons ✓ Lots of potential
✓ Derivative but solid gameplay
✓ Stellar Character Design
✓ Visually stunning ... x ... Although with some burrs
x RPG mechanics to evaluate
x Will the narrative component hold up to the end?

Do you want to be a video game expert and know all the tricks, guides and reviews for your video games ? Holygamerz.com is a group of video game fanatics who want to inform you about the best tricks, guides and tips. We offer you the best information to be a reference in gaming, so here you can find guides, tricks, secrets and tips so you can enjoy your games to the fullest. Are you ready to get all the achievements of that game that you resist so much? Enter now and enjoy your favorite video game to the fullest!
News + Video games for the disabled and Ubisoft: an audio game for Assassin's Creed. ❯

Shadow of the Beast preview

Preview Kirby and the Rainbow Brush