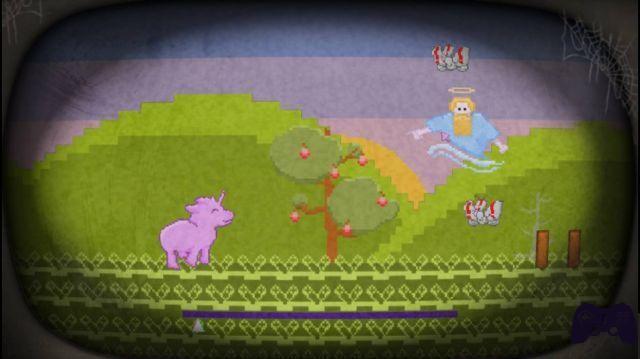 Talking about Pony Island it's a damn difficult task. Or rather, it's damn hard to find a way to explain the product of Daniel Mullins Games without running the risk of ruining, at least in part, the ideas put in place by the developer. For this reason this time the writer will not play according to the "rules" dictated by custom that want the final judgment reserved for the comment of the review: our advice is to scroll down to the bottom of the page (if you really can't not look at the vote) but then go and buy Pony Island, and eventually come back for the insults in case you did not like it. If, on the other hand, you are still skeptical, continue on, we will try to do everything possible to make you arrive "virgins" in any eventual appointment with the game.

What would happen if evil formed inside you?

The devil improvises himself as a developer. With infernal results

Pony Island, in the fiction of the game, is a normal, slightly vintage arcade cabinet, the kind that dispense the classic tickets with which you can then redeem some prizes in the arcade. The only aspect out of the ordinary is that the cabinet was developed by the Devil himself, not exactly a top in terms of programming: just think that at the beginning of the experience not even the initial loading works, and it will be up to the player to remedy it. Everything is obviously designed to trap new souls, condemned to get stuck inside the game. The main goal of the protagonist is, of course, to escape, and to do so it will be necessary to delete three main files from the machine in order to cause a system crash and gain the opportunity to regain his freedom.


While continuing from the point of view of the story in a fairly linear way, Pony Island does not miss some secrets (optional) to discover, focusing in any case more on its characters (in particular the antagonist has reminded us on more than a few occasions GLaDOS of Portal) and, as we will see shortly, su anomalous playful solutions that try to displace the player for the duration of the experience, about two hours.

We constantly change genres, trying to (and managing to) catch the player out

It is a puzzle game. No, he's an endless runner with ponies. A graphic adventure, or even better, a Zork-style text adventure. Or an old-fashioned RPG instead. Pony Island is all of these things in a way. At first you find yourself struggling with a sliding game in which you control a pony with the aim of avoiding obstacles by jumping until you get to the finish line flag: these monotonous sessions after a couple of games will become literally unsurpassable, and it will therefore be necessary to wander around the menus of this game-within-the-game looking for a solution to continue. Then there come the moments in which you have to put your hand to the code of Pony Island, which by exploiting a solution already seen for example in the Human Resource Machine will allow the player to alter the natural course of instructions by acting on some blocks that affect the movement of a cursor. In one way or another we can also explore solutions taken from other genres, shuffling the cards on the table with a certain frequency and creating comic situations that are absolutely capable of entertaining, even when the mechanics are more evidently "saving money. ”And the challenge may not be as brilliant as it was in some previous steps. In short, Pony Island ranges from one genre to another, trying in every way to surprise the player, practically recalling the basic idea of ​​one of the universally recognized videogame clashes among the most brilliant in the history of the industry, the one between Psycho Mantis and Solid Snake in the first Metal Gear Solid. However, there is also room for reflections on the limits of the meta-referential (in fact, the player is playing with the aim of destroying the game), which further contribute to a sort of race to knock down the fourth wall, often beaten to more taken from the work of Daniel Mullins.

Also on the visual front, Pony Island alternates a couple of styles: for most of the experience everything will be packaged in an extremely minimalistic way, with graphics bordering on sci-fi or vector, but at a certain point giving the change (before forcefully return in this direction) to a 16-bit era pixel art. All this, however, thanks to the resources required not really high-end, can be played without particular problems whatsoever even on hardware configurations not in the latest cry which together with the extremely popular price (less than 5 euros) makes the product accessible to anyone without many excuses.


Verdict 9/10 Still here? Fila hunting the money Comment Pony Island is the classic independent title capable of becoming the nightmare of those who have to write a review: from a playful point of view the challenge, especially when it comes to "computer" puzzles and more scrolling sessions. advanced, there is no lack, as in other game situations, the material to create a different experience, outside the box and undoubtedly fun in more ways than one. On the other hand, however, we are sure that it is not a title for everyone and some users may consider it a kind of jumble of minigames, perhaps not even so valid from the point of view of mechanics. Whoever is writing in any case has been convinced and conquered by the work of Daniel Mullins and cannot help but recommend it to anyone: for any insults you can find all my references and a special comment space at the bottom. Pros and cons ✓ Brilliant on more than one occasion
✓ Hardly repetitive
✓ Hugely popular price x Not for everyone's palate

Do you want to be a video game expert and know all the tricks, guides and reviews for your video games ? Holygamerz.com is a group of video game fanatics who want to inform you about the best tricks, guides and tips. We offer you the best information to be a reference in gaming, so here you can find guides, tricks, secrets and tips so you can enjoy your games to the fullest. Are you ready to get all the achievements of that game that you resist so much? Enter now and enjoy your favorite video game to the fullest!
Rocket League Review ❯

The Binding Of Isaac: Rebirth review