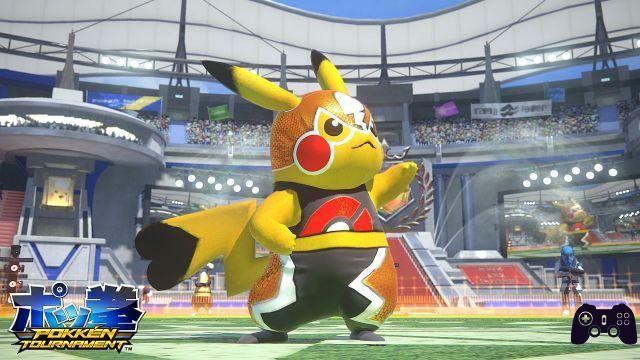 A fighting game on Pokémon developed by Bandai Namco (to be precise by the Tekken team) and published on Wii U? Thinking about it just a while ago it seemed madness, and instead, after the release of the arcade version in Japanese arcades almost a year ago, here we are talking about the home version of Pokkén Tournament, to be released worldwide on 18 March.

Pokkén Tournament is a title from bizarre but solid concept. Of all the roads that Bandai Namco could take in creating a fighting game dedicated to Nintendo pocket monsters, Pokkén perhaps follows the one more original and risky. Rather than making a version of his Tekken, perhaps putting in a roster of fighting-type Pokémon, Harada's team decided to devise a game and battle system specifically for this setting. Here then is that the Pokken introduces us to the Ferrum fight, a new type of Pokémon battles in which the trainer resonates with his Pokémon, controlling their movements in first person. All this is possible thanks to a particular headset, which uses the energy of some minerals present in the ground of Ferrum, the new region of the Pokémon world designed specifically for this title. In Pokkén Tournament Pokémon battles take place with the alternation of two phases, the panoramic phase and the duel phase. In the first, with a camera behind their backs, the Pokémon are free to move three-dimensionally in the arena, throwing bullets and seeking attacks. By scoring some particularly powerful attacks, a phase change can be triggered, passing to the fight phase in which the movement will be two-dimensional, with the camera moving to the side to recreate the shot of a more traditional fighting game. Faced with relative simplicity in the controls, three buttons for attacks, one for the jump, one for the parry and one for the support, Pokkén presents a completely unexpected level of depth of gameplay. Not only does the move park of each Pokémon differ between the panoramic phase and the fight phase, but the same phase change has a significant effect on the possibility of recovering energy.
Pokémon can also use completely different moves depending on whether they are in neutral position, high position and low position, allowing you to vary the strategies against opponents in parry or engaged in air attacks. The holds and counterattacks are also very important, to be carried out by simultaneously pressing two keys. In fact, the holds allow to overcome the enemy parries, while the counterattacks manage to break the sequence of attacks of the opponent. In turn, a simple attack will be able to stop a hold before it is made. This triangular system marks the precedence of attacks in Pokkén Tournament and is the backbone of the whole game. Knowing the moves of the various characters, how the attacks are chained in combos, their range, and above all which animations you can cancel to go and make a hold or a counterattack is essential to play Pokkén at the highest levels. The gameplay picture is completed by the ability to call a support Pokémon into the field, to recover energy, apply status changes or perform optional attacks, and the ability to enter Super Resonance mode, to inflict additional damage and launch devastating final attacks. (complete with Mega Evolution, if our Pokémon were provided with a mega-evolved form).

While Pokkén Tournament's various gameplay systems appear complicated to describe, in reality the game is very intuitive, and a series of quick but complete tutorials they guide the player in mastering even complex concepts right away. In fact, the title is also approachable by non-expert fighting players and by the little ones, allowing anyone to choose the spirit with which to face it. In addition to the canonical training and single match vs. the CPU, Pokkén presents a full-bodied story mode which sees the player, in the role of a customizable avatar, face the four fighting leagues of the Ferrum region. In each of these he will have to carry out fights to rank among the first 8 participants, then face the other finalists in a single elimination tournament and only at the end challenge the league master to move on to the next category. Between one league and another there will also be scenes and dialogues that will carry on the plot of the game, centered on a Mewtwo and a mysterious trainer. If on the one hand the story mode appears rich and well structured, on the other perhaps the Bandai Namco team wanted to overdo it. Increasingly, each league contains a greater number of participants, and requires an increasing number of matches. With a roster limited to 16 characters you end up within the same category to face the same Pokémon several times with a similar if not identical difficulty level, going to configure a certain underlying monotony. The idea of ​​the leagues is not in itself evil, going to recall the concentration of gyms and medals of traditional Pokémon games, but the excessive number of battles present in the Pokkén Tournament story mode almost exhaust the player. Perhaps a different development of this modality would have been preferable, perhaps with fewer fillers and more clashes with particular characteristics, to increase the variety of the action.

The competition comes on

There is no doubt that online multiplayer represents the core mode of Pokkén Tournament in the intentions of the development team. As the standards of Nintendo multiplayer games of recent years want, in Pokkén the online mode separates friendly matches, in which to face friends and strangers just for fun, from classified ones, in which you will literally climb the world rankings, complete with penalty for disconnecting during a match. In multiplayer Pokkén shows all the goodness of its game systems, going to make clashes that are almost mental battles against the other player: you set traps, you try to make him discover, to force him to use moves that are counter-attackable. The unexpected strategic dimension of the title makes Pokkén Tournament a very interesting title for the competitive player, who will find bread for his teeth also thanks to the variety of the roster and the park of each monster's moves. If it is true that the fighters are only 16, the selection was made in an absolutely impartial way, without favoring any category of Pokémon and indeed including some unconventional fighters. The balance appears painstakingly studied, with the possibility of facing any type of opponent and any strategy they employ. The matchmaking algorithm works properly, always selecting opponents around our level, while the same cannot be said of the netcode, which on more than one occasion has shown some hesitation, surprisingly more often with local rather than international opponents, with some problems of lag and slowdowns.

Pokkén Tournament is solid from an audiovisual point of view. The particular graphic render adopted by the development team allowed one exceptional rendering of the various monsters, with hairs, furs, scales and surfaces with a credible and realistic look. We are faced with what it is perhaps the three-dimensional realization of a best Pokémon ever, accompanied by very fluid animations and special attacks with jaw-breaking effects. The downside, however, is made up of bare and devoid of detail arenas, sometimes with non-level textures and audiences made with two-dimensional sprites. This is a necessary compromise to maintain fluidity on a platform like Wii U, and considering that the focus is always on Pokémon and the action, it's easy to overlook it. The music is instead of a high standard, with intriguing pieces that underline the action very well. The dual audio English and Japanese for dubbing, while the texts on the screen are fully translated into other languages.

Verdict 8.5 / 10 From RPGs to fighting games, never before seen metamorphosis so successful Comment Pokkén Tournament is a winning bet for Nintendo and Bandai Namco. Much more than a Tekken with Pokémon (we will never tire of saying it), the title presents an original and very deep gameplay, full of goodies both for the pokéfanatico and for the fighting game enthusiast. Its gameplay is well suited to the competitive scene, while an effort to make singleplayer more varied could be made. The only real flaw, however, is the not perfect netcode, with some slowdown too much to disturb the online matches. Too bad, because that problem aside, Pokkén Tournament is truly a title that every Wii U owner shouldn't miss. Pros and cons ✓ Deep and original gameplay
✓ It will appeal to pokéfanatics as much as to fighting game fans
✓ Well suited to competitive multiplayer
✓ Phenomenal graphic rendering of Pokémon x Some slowdowns in online matches
x Overly repetitive story mode
x Graphic rendering of neglected arenas
Do you want to be a video game expert and know all the tricks, guides and reviews for your video games ? Holygamerz.com is a group of video game fanatics who want to inform you about the best tricks, guides and tips. We offer you the best information to be a reference in gaming, so here you can find guides, tricks, secrets and tips so you can enjoy your games to the fullest. Are you ready to get all the achievements of that game that you resist so much? Enter now and enjoy your favorite video game to the fullest!
News Overkill's The Walking Dead, two new videos available ❯