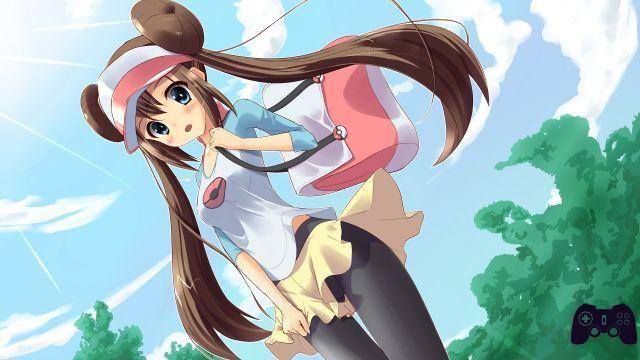 2012 was a very rich year for the Pokémon brand, although there were no titles for 3DS (apart from the Pokémon RAdar "applications" which we will discuss below and the Pokédex 3D Pro due out in November), the monsters of Game Freak have depopulated on Nintendo DS with two spin-offs (Pokémon Conquest and Learn with Pokémon) and in the last months of the year they arrive in stores with a chapter of the main series, a direct sequel to Black and White.
With Pokémon White Version 2 and Black Version 2, Game Freak for the first time shows us a direct and numbered sequel to the chapters of the main series, unlike in the past where a third revised and corrected version was released but in which the story was almost identical.

Two years have passed since the ending of Black and White. Team Plasma has split into two factions, one redeemed that continues N's goals, and the others still on Ghetsis's side, therefore still intent on conquering the world. Meanwhile, in Alisopoli, Komor has become a gym leader and is preparing to accept the challenge of the new protagonist, who has just received his first starter from Belle, who has become assistant to Professor Aralia.
What is Team Plasma's new plan? Who is the mysterious Colress, who wants to make the most of Pokémon's potential? What happened to N?
All these answers you will have only playing, because we don't feel like ruining even a twist.

In these two years Unova has changed, and the Pokémon of the past generations have invaded it, so we will immediately find ourselves able to choose among the "old" Pokémon, between Riolu and wild Eevee, in order to guarantee a wider choice even though the current generation hasn't changed.
Not only the fauna has changed, however, even the cities and people have undergone changes in these two years, for example Nardo is no longer the champion of the Pokémon league, and some gym leaders have abandoned the role to make room for young promises like Cheren.
Libecciopoli is no longer the rural city of the previous chapters but is now a real world power (thanks to the mineral deposit found by Rafan!), So much so that it can host the World Tournament which we will discuss below). Also there will be new places such as the sewers, and new caves to explore alongside our monsters.
But the novelties of Black and White 2 are not limited to the plot, several goodies have been introduced starting from the Awards, 200 special tokens that will be given to us when we perform certain actions of varying difficulty, which cover all the experiences that the game can provide ( from the simple evolution of Pokémon, to winning a number of challenges), both online and offline and which are very reminiscent of the Trophy and Achievement system of PS3 and Xbox 360; collectibles that further increase the longevity of an already profound title.

Three major institutions make their debut in Black and White 2, covering every aspect of Pokémon, and adapting to virtually every type of player.
To join the Pokémon Musical, we find the Pokéwood, a Hollywood parody, where our protagonist will become a star in all respects, acting (yes, we will finally see our hero talking, ndGuido) initially with some Pokémon for hire, and later with your team.
If we follow the script, we will be able to make real blockbusters with a lot of sequels and multimillion-dollar receipts; pity that the actions are limited and do not allow us to write our film, and if we want to not follow the script this will not ensure success, indeed the film will most likely be a flop. In short, by making the directors' tips perfectly executed (F. Pokéllini knows how to be very fussy) we will become real stars known throughout Unova.
For lovers of the fight we have the Pokémon World Tour, organized by Rafan in Libecciopoli, which will allow us to re-face old acquaintances from all previous chapters (including even Giovanni, the leader of Team Rocket!). Tournaments that, like the Metro Fight, will not provide us with experience but useful Battle Points, which can be spent as usual for rare tools and new moves.
Finally, here is the Solidarity Gallery, a tunnel that, thanks to online encounters (exchanges, fights, Dream World), victories and all other gaming events, always following our choices, will be filled with shops and customers. A way to expand the already great connectivity and multimedia of the series, and that will make this section of the game a management system in all respects: we will have to recommend shops and check the earnings, if we want our gallery to become famous and increasingly visited.
In short, there is something for all tastes, in what is certainly the richest chapter of things to do of the Game Freak brand.

What do I do with Keys and Axes?

There are new options in the main game menu, although some will only be accessible after completing the main story.
In the Axis with Unova we will not only be able to unlock precious flashbacks (useful to cover the past two years), synchronizing the saves with those of the previous chapter, but also unlock the key system.
The Keys will allow you to add a little spice to our adventures, available after seeing the credits for the first time: for example, we will be able to change the game difficulty, for the first time in the main series we can therefore increase the level of challenge even in offline mode and not just aiming to become the best competitive online.
The last axis is the Nintendo 3DS Axis, which allows you to receive Pokémon and items from the new Pokémon RAdar application, available on the 3DS e-shop.

Turn on the Pokémon Radar

Small parenthesis in the review to talk about this application, exclusive 3DS, which thanks to augmented reality (hence the letters "RA" of "radar" in capital letters, ed) will allow us to add exclusive Pokémon (including the Totem forms of Landorus , Thundurus and Tornadus) not only to Black and White 2, but also to the fourth generation cartridges (although obviously we can add Pokémon present in those versions, including Lugia, Ho-oh and Giratina).
By hitting the dream clouds, we will be able to collect energy to enhance our Radar, or find Pokémon and useful tools. RAdar Pokémon recharges over time, and is a minigame that does not steal more than 5 minutes at startup, but which is nice and above all useful for new adventures in Unova.
A little incentive to play the main brand's new chapters on 3DS instead of DS.

Beautiful to the eye and pleasant to the hearing

The graphic sector of Black and White 2 is practically the same, even if the Pokémon have been enriched with new animations and there are many more Pokémon sprites outside the poké-ball as happened in Heart Gold and Soul Silver. Unfortunately, however, these are limited to those of the non-player characters, leaving us with the sadness of not being able to take our newly captured Eevee for a walk as in the aforementioned remakes.
Graphic and technical changes also for the Boxes, where we will finally be able to move more than one monster at a time, and to the Pokédex which now reports the Pokémon also divided by areas, becoming even more useful and necessary to complete the collection.
All accompanied by always excellent new musical themes and remixes of those present in Black and White, and for the first time we will have a semblance of dubbing (for example Velia, the second gym leader, will sing in English!) In addition to the verses of the monsters.

I also challenge you online… again!

The online sector of Bianco 2 and Nero 2 is practically identical to the previous chapters, the GTS also returns both for random combinations and for exchanges with the whole world. In addition, the C-Gear also returns, both with the infrared connection and with the wireless and finally also with the Synchro game, which allows us to connect to the Dreamworld (http://it.pokemon-gl.com/) and Capture Pokémon with different abilities from those found in the game.
Very good online sector, which finds its only defect in the players who reset the game when they are about to lose, a fault that is therefore not to be attributed to Black and White 2 but to the lack of sportsmanship of the coaches ...

Pokémon White Version 2 and Black Version 2 are immense titles, as befits the main Game Freak series, full of activities and above all that are not limited only to the portable console but also interact with the Internet and with external applications. A title that requires having finished Black and White to be fully enjoyed but which, in that case, guarantees a truly complete experience of the Pokémon universe.

Verdict 9/10 It is Pokémon with even more plot Comment Those who love Pokémon can not help but adore the White and Black 2 version, both for the improvements made and for the game itself which is technically the best chapter of the series. If the guys of Game Freak added small things present in the old chapters (such as the Search-challenges or the Pokémon companion) we will be able to have the perfect episode in our hands, so we are waiting for the first chapter of the main series on 3DS. In the meantime, let's enjoy the return to Unova with the title that Pokémon lovers should already have in their hands and which in any case cannot be missing on the 3 / DS. Pros and cons ✓ Excellent introduction of the Aces and the increase in difficulty
✓ A huge game full of things to do
✓ It's still a new Pokémon adventure! x Little exploited Pokéwood
x Partner Pokémon absent again
Do you want to be a video game expert and know all the tricks, guides and reviews for your video games ? Holygamerz.com is a group of video game fanatics who want to inform you about the best tricks, guides and tips. We offer you the best information to be a reference in gaming, so here you can find guides, tricks, secrets and tips so you can enjoy your games to the fullest. Are you ready to get all the achievements of that game that you resist so much? Enter now and enjoy your favorite video game to the fullest!
News Fire Emblem Warriors - Japanese - Voice Pack will be released ❯

The Legend of Korra review

Descenders | Review: tricks and crazy descents on a mountain bike

Maneater | Review: a shark against all