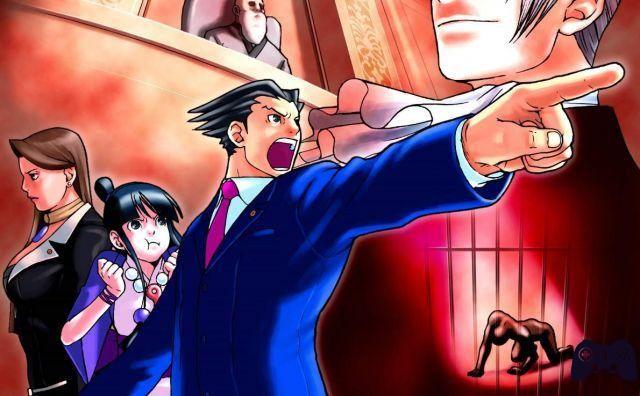 Whenever you think about Phoenix Wright, the touch generation of Nintendo DS. Although the series was born in the now distant 2001 on Game Boy Advance, it is thanks to the double screen console that he lived a second youth that allowed him to be known and loved all over the world.
Today, several years after its debut Capcom decides to carry on Nintendo 3DS the original trilogy, all enriched with improved graphics and stereoscopic 3D support, at a price that is perhaps not exactly attractive. Let's find out together the Phoenix Wright: Ace Attorney Trilogy.

boasts a rich and articulated plot, never predictable and open to unexpected implications

For those unfamiliar with the Ace Attorney saga, this is a series of judicial-themed visual novels in which we will experience the deeds of a new lawyer, Phoenix “Nick” Wright precisely, which will take its first steps in the environment. Talking about the plot of these three chapters without committing any spoilers is impossible and so we'll let those new to the series enjoy the surprise. Because Ace Attorney has the merit of boasting a rich and articulated plot, never predictable and open to unexpected implications, expertly written and directed by Shu Takumi who has been able to enhance and characterize every single character in a wonderful way, making them grow over the course of the three chapters that make up this long narrative arc.
Not only Phoenix, the protagonist, whose evolution would seem almost obvious, but also fundamental characters such as Miles Edgeworth, Phoenix's friend and rival in court, capable of earning two spin-offs with his strong personality. Or the clumsy Detective Gumshoe, key figure for the resolution of many of the cases that we will face and excellent comic shoulder, o Maya, the trusted partner of many adventures who will provide us with her support during trials and at crime scenes. Impossible not to mention, even if briefly, a character like Godot, our nemesis in the third chapter of the series, but so multifaceted as to fascinate us like no one ever, making it one of the most complex and successful "opponents" of the whole saga.
Also on the front of the surrounding characters, many of which recurring in the course of the three titles, the work done on the characterization plays a primary role, creating specks that work perfectly, exasperating some character aspects that will give the best of themselves during the long sessions. procedural.

The visual novel structure it imposes tons of text to read, but despite a massive presence of dialogues, it will hardly happen to get bored or want to skip some fundamental step, indeed we will be encouraged to continue in the story to get to the solution of the case as soon as possible, literally devouring the game.
Each title in the Ace Attorney series is divided into chapters. In each episode we will be informed about the case or the events that will take us to court. We have the task of defending the client on duty by arriving at the truth by proving his innocence. Not only on the stand, carefully examining the words of the defendants looking for contradictions to use to our advantage in cross-examinations, but also on the ground. It will always be up to us to go to the crime scene to examine the place where the murder took place, looking for evidence or elements that can help us find a solution, also taking advantage of the use of forensic techniques. Here the use of the touch screen is essential, a touch on the lower screen will be enough to select the element to be analyzed and interact with it, and if deemed important it will be immediately archived. At the same time during the trials the lower screen will be used to access at any time the profiles of the people involved in the case and the archive of evidence to compare them in real time with the statements of the witnesses, looking for a "flaw" in the deposition.
Once a contradiction has been found, it will be possible to interrupt our interlocutor, pressing him with the evidence in our possession. Obviously hoping that our choice is the right one, otherwise we will be recalled by the judge who will penalize us by reducing the chances of making mistakes, up to the game over.
As in the original chapters, you can also intervene using voice commands by simply pressing the "Y" key which will activate the console microphone, allowing us to pronounce one of Hold It, Objection or Take That, the phrases that Phoenix uses during the trial. Instead, present in Justice for All e Trial and Tribulation, respectively second and third installments of the series, a “new” dynamic linked to interrogations, namely i Psychic Padlocks, a variant of the gameplay that requires the opening of some special locks that hide from Phoenix the truth that the witness tries to conceal.

Phoenix Wright: Ace Attorney Trilogy proposes a graphic restyling that improves the visual rendering. Contrary to the version released on devices iOS, where the game enjoyed the HD suffix thanks to the resolutions offered by the products Apple, on Nintendo 3DS unfortunately it is limited to a general improvement of the same compared to the original versions. Therefore greater quality of the line of the silhouettes of the characters, mostly by Tatsurou Iwamoto, as well as the rendering of the backdrops, more defined than in the past and reworked to adapt to the proportions of the 3DS screen. The simple animations of the characters that will come to life when we put their deposition in crisis remain unchanged or almost. Exclusive feature reserved for the Nintendo version we find the presence of stereoscopic 3D. Being a two-dimensional title, this three-dimensional function will accentuate the figures of the characters, which will be extruded from the backdrop and brought to the foreground.
The absence of a dubbing, due to the limitations of the original console, is filled by a soundtrack by Masakazu Sugimori e Akemi Kimura who have composed and arranged a series of songs that manages to give color to the various phases of the processes, playing on the rhythm of the songs and on the tension of the situations, in a combination of melodies, today, with a chiptune aftertaste.


But how much do you cost me?

In this collection, as well as in the iOS version, only the English language is available, unlike the originals on Nintendo DS which boasted the presence of the major European languages. One of the causes of the absence of a Spanish translation is to be found in the fact that also the first English version has been revised, adapting some passages that had not convinced with the previous release. The fact remains that Phoenix Wright: Ace Attorney Trilogy is a title in which the massive presence of judicial dialogue and vocabulary it can also represent a barrier for those with a basic knowledge of the language, thus limiting their understanding.
Despite the fans around the world and the success of the series, the life of our "Nick" is not that simple. And the first signs from a Capcom not exactly open to bringing its games to Europe we had them first with the spin-offs, then with the fifth chapter of the series, which arrived here in digital format only (and the cross-over with Layton published thanks to Nintendo) despite the requests and petitions opened on the web. The same fate has befallen this trilogy, which only arrives on Nintendo's eShop at a price not really friendly of 29.99 €. Its a price in line with the digital releases on Nintendo 3DS and quite congruous for the proposed offer (however, we are talking about 3 excellent quality titles that are difficult to find). However, if you compare this version with the same release on iOS, you immediately notice a price discrepancy for the mobile version at a cost lower than 50%, then aggravated by the language issue.

Verdict 8.5 / 10 Santi Licheri is my copilot Comment Phoenix Wright: Ace Attorney Trilogy is the perfect opportunity to put your hand to the original trilogy of the adventures of Phoenix Wright for all those players who for one reason or another have missed this piece of video game history, and for nostalgic fans of the series. The price perhaps a little high (compared to the iOS version too), the only availability in the digital format and the absence of the Spanish language can represent a defect for many, especially for those who already own the originals and who do not find any appeal in the graphic restyling alone or in the presence of stereoscopic 3D. Pros and cons ✓ 3 games in one
✓ Over 60 hours of gameplay
✓ Graphic review of the three titles x Available in digital format only
x Only the English language is present
x Price a little high
Do you want to be a video game expert and know all the tricks, guides and reviews for your video games ? Holygamerz.com is a group of video game fanatics who want to inform you about the best tricks, guides and tips. We offer you the best information to be a reference in gaming, so here you can find guides, tricks, secrets and tips so you can enjoy your games to the fullest. Are you ready to get all the achievements of that game that you resist so much? Enter now and enjoy your favorite video game to the fullest!
Special Mario + Rabbids: Kingdom Battle - A chat with Davide Soliani ❯