Ori and the Blind Forest review 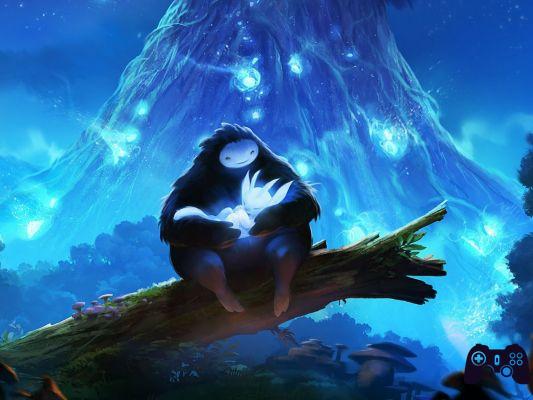 We have spent rivers of words to praise indie productions, and now with each new release certain positive comments seem almost cloying. But it is a fact, many of the most beautiful, innovative and fulfilled works of recent years come from the independent scene, and all this success has allowed semi-unknown studios to make a name for themselves in the world. It is therefore not surprising that the case of Moon Studios, born as a collective of developers whose components are scattered around the world, to have attracted the attention of Microsoft products after that, in 2011, work had begun on Ori and the Blind Forest, so much so that he decided to publish it. It took 4 years of intense work, but finally today we have one of the most interesting platformers of this season in our hands. Will the wait pay off? Find out with our review.

Ori and the Blind Forest is an emotional story

The first few minutes of Ori and the Blind Forest are poignant. Ori, a forest spirit of Nibel is separated during a raging storm from the Great Spirit of the Forest, a huge tree that towers over the whole region. Fortunately the helpless Ori is raised by Naru, enigmatic and taciturn creature who lives in the heart of the woods. A close bond is established between the two, which gradually grows with the passing of the seasons. Unfortunately, like any fairy tale, the idyllic life of the two is abruptly interrupted by a tragic event that will bring the forest to the brink of death and will push Ori, unwittingly, to change a destiny that seems already written.
Ori and the Blind Forest is an emotional story. The first minutes of the game, in which you are made aware of the events, impact the player with the same arrogance as some animated works. Not even the developers hide their love for Disney or, looking east, lo Studio Ghibli and in the prologue all this passion and inspiration emerges. Few images, a fast forward of moments of the two protagonists who tell us about their life, which are worth a thousand words. Then the drama brings us back to reality by changing all of a sudden register. The sunshine and the good feelings of the introduction vanish, leaving room for the desperation of poor Ori, in a world bigger than him., made up of scary beings and where death is an inch from the nose. Yes, because Moon Studios deludes us, immersing us in a fairytale atmosphere and then suddenly canceling everything and throwing ourselves headlong into the action, in a 2D platformer that also draws inspiration from the greats of the genre in the dynamics , among all the series of Metroid, which extrapolates its playful structure and shapes it for use and consumption. Ori does not innovate, but rather mixes together various finely tested gameplay solutions, mixing them in a style that already appears functional and winning from the first screens.

The response to Ori's commands is almost perfect and immediate

It starts with our protagonist who can perform some actions basic. Just go into the depths of the forest of Nibel to get in touch with a spirit and thus obtain the first enhancement, earning the opportunity to attack and then defeat the enemies. At this point, by pressing "X" we will be able to face the numerous threats that we will find in our path, "firing" on the enemy the beams of light that will consume their vital bar. But like any good self-respecting metroidvania Ori's powers are destined to increase as well as skills. By killing enemies and collecting special orbs (Orange experience, Green health and Blue mana) and we will get some Skill Points that we can spend to increase our potential. And so our shot will first increase in power, and then evolve into a guided shot capable, upgrade after upgrade, of hitting multiple enemies at the same time or doing even more damage. Ori's abilities will also increase, however, relative to the progress of the story. Each advance represents a piece in the move park of the thin spirit. They range from the classic double jump to the wall jump, to loaded shots to be used against certain background elements to activate switches or destroy some more delicate sections to open up new paths.
Among the various moves that can be performed, the most characterizing one is undoubtedly the possibility of using enemies (or their bullets) to gain aerial momentum and reach parts of the level otherwise unattainable. The response to Ori's commands is almost perfect and immediate. Any action, even the most complex that we want to carry out, can be performed without any problem. And this is reassuring, because despite the innocent aspect of the Moon Studios title, there is a challenging platformer that requires patience and a lot of good dexterity to overcome certain situations. Generally Ori and the Blind Forest he lets himself be played without too many worries. Of course, to reach and obtain the collectibles (which will serve to strengthen us) we will need to think by putting a strain on both our intellect and the skills as players, with precise actions to the millimeter that require the use of multiple combined skills.

The twelve labors of Ori

Ori in some moments raises the bar of difficulty to excess

But it's not just this. Ori in some moments raises the bar of difficulty to excess, touching peaks of inhuman malice risking to touch the peaks of frustration. These rare episodes are mostly identifiable as "endless run" phases where we will have to escape from a certain enemy or from the explosion of a temple. Everything will be done with perfect timing and no mistakes must be made, under penalty of game over and subsequent restart from the checkpoint. The trial & error dynamics take over, forcing us to make efforts mnemonics to better assimilate the position of each element Useful, obstacle or enemy; as well as obviously repeating the stage dozens of times before being able to come out of it. Another aspect that is inextricably linked with the difficulty of the game we find it in the rescue system and checkpoints. Basically Ori and the Blind Forest saves our game in a few predetermined points, usually upon arrival in a new macro area or after an important event. The rest of the task is entrusted to us, which we will have to manually save by going to exploit Ori's magic points. You will understand well that being bound to these points it will not always be possible to access the save, forcing us to be careful about our actions and to reload the bar often. Fortunately, this system is not so prohibitive, as the dedicated bar will tend to fill up relatively quickly and, especially in the advanced stages of the game, once this bar is increased we will hardly find ourselves in the situation of being unable to save. The underlying problem, in a world where we are used to always having everything immediately, resorting to a rescue system of this type may seem anachronistic and impractical to most, but surely at the umpteenth attempt gone bad you will remember to save with more frequency.
Ori and the Blind Forest it's also a long-lived title for the genre it belongs to and given the nature of a title destined for the digital market. Our game stopped at the stroke of the tenth hour of play, with a 94% completion of the map and most of the collectibles. There is one thing that needs to be said and that being a metroidvania was like a punch in the stomach for us. Once we get to the end credits, it will not be possible to retrace our steps to collect all the collectibles that we have left behind, forcing the player to start a new run. A sincerely incomprehensible move by Moon Studios, which among other things comes without even warning the player that it has reached the end and that from then on it would have been impossible to go back. Another unconvincing aspect we find in the vast game map that does not allow rapid movements between the various areas, forcing the player to a continuous backtracking, especially in the final stages in order to complete the game in all its parts.

Moon Studios Offers an audiovisual experience of the highest level

Standing ovation on the other hand as regards the graphics sector. Already in the prologue the beauty of the images on the screen leaves you ecstatic and improves exponentially as you venture into the game. Moon Studios makes the verse a UbiArt giving us an audiovisual experience of the highest level, of a poetic beauty that few titles manage to touch thanks to the versatility of Unity. The two-dimensional screens are an orgy of elements on several levels and amazes for the extreme attention to detail, all rigorously drawn by hand. Also on the side of the animations we travel on high levels, not only for Ori and for his enemies, but also for the settings themselves, which almost seem to pulsate with a life of their own. Each stage boasts a sophisticated and well-built level design, especially in terms of gameplay to encourage the player to commit to discovering his every secret. All rendered at a resolution of 1080p and with an almost always constant fluidity that goes towards 60fps. One thing must be specified. After the first few minutes of the game we noticed annoying slowdowns that had a constant and negative impact on our game.. Sifting through the game options related to video settings we have disabled a call option "Motion Blur" and that added a blur filter to the game which, in our opinion, compromises not only the fluidity of the game engine but also the final beauty of the image. To accompany us in the adventure we also find the sublime notes of Gareth Coker, which he composed for the occasion a dreamlike and intimate soundtrack, also able to tell us a story thanks to its poignant notes and to perfectly enhance every single moment within the game.

Verdict 8.5 / 10 Ori et labori Comment Moon Studios and Microsoft give us a splendid platform with a touching story capable of snatching even a few tears from the first moment of the game. Although it does not innovate the genre it belongs to, the alchemy that is created with its gameplay elements gives life to a timeless title that deserves to be played. Although it shines on all fronts, however, there are some flaws, especially in relation to excessive changes in difficulty, which in some cases could discourage the player from continuing their adventure. Pros and cons ✓ One of the best 2D graphics available
✓ Almost perfect gameplay
✓ Touching and poignant soundtrack x Unable to continue the game after the epilogue
x Sometimes it touches peaks of excessive difficulty
Do you want to be a video game expert and know all the tricks, guides and reviews for your video games ? Holygamerz.com is a group of video game fanatics who want to inform you about the best tricks, guides and tips. We offer you the best information to be a reference in gaming, so here you can find guides, tricks, secrets and tips so you can enjoy your games to the fullest. Are you ready to get all the achievements of that game that you resist so much? Enter now and enjoy your favorite video game to the fullest!
Crash Bandicoot Review: N. Sane Trilogy ❯

Add a comment from Ori and the Blind Forest review