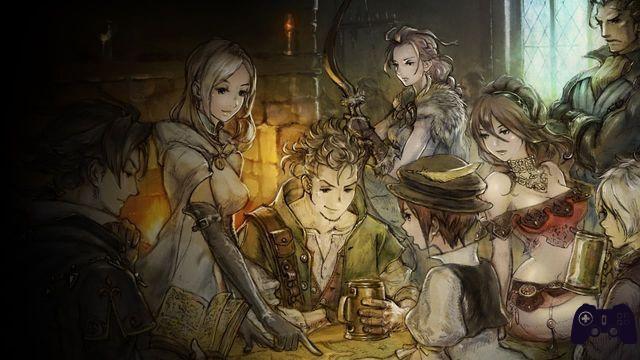 Gossips say turn-based RPGs are dead. Octopath Traveler is proof of the opposite.

After an amazing first year, the Nintendo Switch seems to have pulled the handbrake. It seems because among the avalanche of independent productions and Wii U ports, a few shots have been fired.

Between Kirby, Mario Tennis Aces e Sushi Striker, the library of the hybrid was waiting for an immense title, capable of stealing hours from the player like Breath of the Wild e Xenoblade 2. 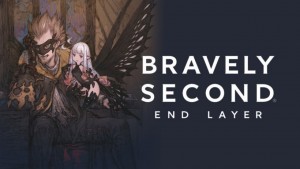 To fill this gap who is not there Business Division 11 di Square Enix, which in collaboration with Acquire had the two Bravelys already packaged on 3DS? It was time to tell a new story.

Or it would be better to say eight new stories, collected in a single cartridge.

Octopath Traveler in fact, it tells the adventures of eight characters, all different in their ideals and beliefs. One month after the release and with already a million copies sold, we are finally ready to have our say on the new exclusive Nintendo Switch.

Eight stories for a single continent

It would be easy to start listing each of the eight protagonists and go into detail on each story. A fundamental aspect of Octopath Traveler but can also be analyzed without getting lost in summaries from the back cover.

At the heart of Octopath Traveler is freedom.

Right from the choice of our main character among the eight. Bond that will accompany us for the following hours, since we will not be able to remove it from the party until the end of its story.

Freedom to decide whether to be accompanied by all eight travelers, or to enlist only a part of them by positively or negatively influencing the combat strategies. This freedom on the narrative flow has a dark side, which has resulted in some of the controversy that accompanied Octopath Traveler in its first month of life. In fact, the eight stories never cross, except for an explorable dungeon once all storylines are complete. 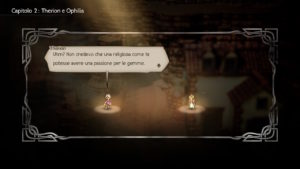 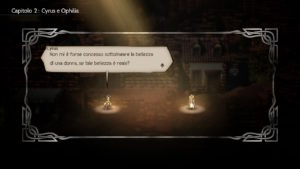 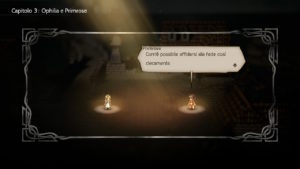 While traveling together, the eight travelers will interact only in small theaters between one story and another. The protagonist of the chapter will continue his misadventures alone, giving little meaning to the group's chorus.

It is understandable how this aspect can turn up one's nose, especially to those who, playing the same genre, are used to group dynamics. But distancing the eight stories so drastically is fundamental to the freedom of the title. Giving the possibility to play even just one story, Octopath Traveler is enjoyable even in a small part. 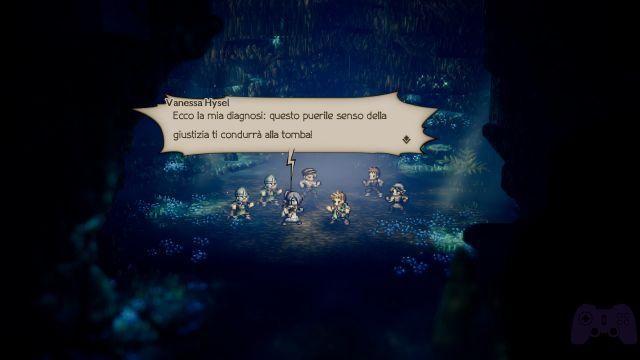 Of course, there are some better stories than others, capable of touching on important topics such as prostitution and religion. More intriguing characters alongside typical RPG stereotypes.

But each element composes a plot with watertight compartments that is appreciable in all its uniqueness.


If the eight main stories don't cross, the same can't be said of the game world. Eosterra lives thanks to its inhabitants. Folk elements, books and legends repeat themselves as we continue through the separate stories of the protagonists. For example, the Rite of the Sacrafiamma, the focal point of Ophelia's story, is taken up in several cities by priests and believers. 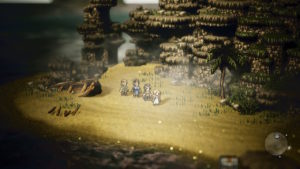 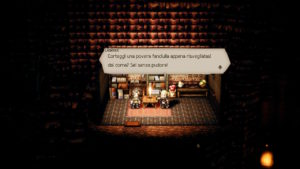 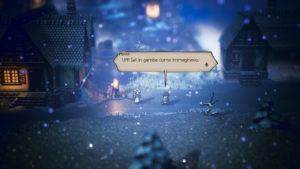 Eosterra is populated by the most varied characters, and many have problems to solve. Octopath Traveler's side missions require the use of each character's unique abilities. From stealing from pockets with Therion, or honestly buying the same item with Tressa, to openly challenging with Olberic or through the creatures captured by H'annit, to leading through faith with Ophelia or seducing with Primrose. Instead, using the unique ability of Cyrus or Alfyn, we will go to discover the secrets of the inhabitants. Investigating serves both story and side missions, but also provides additional insights into Eosterra.
Unfortunately the side missions are the weakest part of the game. Although there are some fun and successful, none will leave a tangible mark, resulting mainly a palliative between one main chapter and another.

If legends and rumors weren't enough, the kingdom of Octopath Traveler is a pixel art painting capable of bewitching from a simple beach to a snowy peak. The exploration, divided into zones, is sanctioned by a level of danger, a sign of the difficulty of casual encounters. Enemies lurking, able to surprise us as we calmly reach the next destination.


In the areas there are also secret labyrinths, in which to face additional boss fights or get your hands on the secondary classes for our heroes. Everything is adequately marked on the game map, in which we will also have access to fast travel to move more quickly (and avoid enemies).

The heir of Final Fantasy VI

The real strength of Octopath Traveler, however, is the combat system. While using a turn-based system according to many old and now dead, the title proves to be compelling in every boss battle, pushing on the skills of the protagonists and making the player proud of every victory. The party is made up of a maximum of four characters and, as we have already specified, each can have specific skills and a maximum of two classes (one basic and one secondary). By defeating enemies, we will gain not only experience points, but also skill points, which will be used to unlock active and passive special powers with which to improve our training.

Again, there is freedom of choice on how to improve our character

Freedom to choose which classes and skills to select, so that you are ready for any eventuality. Octopath Traveler gameplay  it is a synergistic dance between the four party members, who will have to work together to destroy the enemies.

Each opponent has specific weaknesses, which we will have to use to break their defenses and attack without mercy. In Octopath Traveler you pay for every mistake and, especially if you are below the recommended level, you will find yourself sweating and wasting revitalizing items to come out on top. 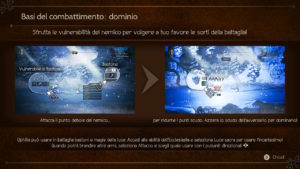 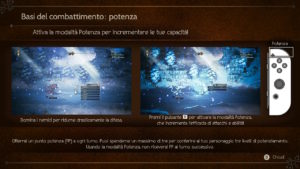 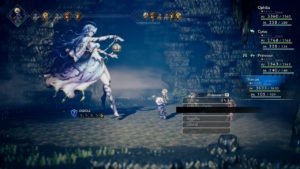 In this modern past, there is a single mechanic anchored in the turn-based RPGs of the XNUMXs. The experience is not shared with teammates on the bench. This results in a difference in level between the characters you will use most often (including your initial choice) and those who will consequently be waiting for you at the inn, waiting to face their own adventure. If you choose to go through all eight journeys, you will have to take into account a more or less constant grinding between one chapter and another.

The title of heir to Final Fantasy VI is not accidental.

In fact, in the approximately seventy hours spent in Eosterra, the feeling of being in front of an emule of one of the best two-dimensional chapters was insistent. The magnificent soundtrack, able to bewitch us right from the initial theme where the title of the game stands out on a black screen. The graphic aspect in pixel art, a reference to the Super Nes, but still in high definition that makes some places on the continent amazing, breaking through the hearts of the most nostalgic. And again the characterization of the eight protagonists, and the growth of the same in each of the individual stories. 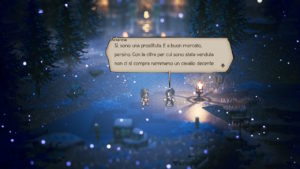 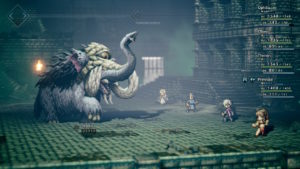 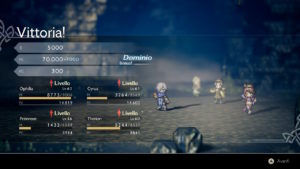 Finally, yet another applause to the ability to play anywhere and anytime thanks to the Nintendo Switch portable mode. Precisely for this reason, while spending hours in the moors to train our benches, Octopath Traveler managed not to get bored. Between trips and days by the pool, the hours in Eosterra will accumulate almost without realizing it.

Nintendo Switch is also the perfect home for turn-based RPGs.

Octopath Traveler -2523749T- Nintendo Switch
On amazon: 55,98 € buy Verdict 8.5 / 10 Pulls more of an artist's hair than a cart of oxen Comment Octopath Traveler proves that turn-based RPGs can still have their say. It is also a role-playing game that gives the choice and the possibility to freely decide the order of events and whether to face them or not. Eight stories so detached from each other, but solid and convincing in their uniqueness. Important topics and solid gameplay are the strong point of this exclusive Nintendo Switch, capable of bewitching fans of the genre and breaking into the hearts of nostalgics. The superb soundtrack will bewitch you, while you will experience a 2D continent full of folklore and legends, a title that, despite its defects, cannot be missing in the libraries of fans. Pros and cons ✓ Eight completely divided stories
✓ Excellent soundtrack
✓ Solid and fun gameplay x Eight completely divided stories
x Unsuccessful side missions
x Grinding could demoralize you
Do you want to be a video game expert and know all the tricks, guides and reviews for your video games ? Holygamerz.com is a group of video game fanatics who want to inform you about the best tricks, guides and tips. We offer you the best information to be a reference in gaming, so here you can find guides, tricks, secrets and tips so you can enjoy your games to the fullest. Are you ready to get all the achievements of that game that you resist so much? Enter now and enjoy your favorite video game to the fullest!
News + Mario Golf: Super Rush, an ace during Direct ❯