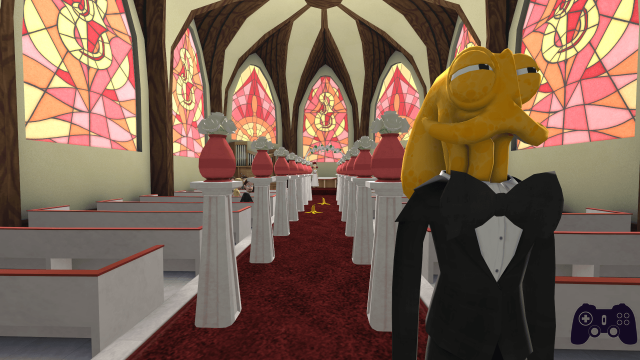 An old adage says “never judge a book by its cover”. Ignoring this saying, when Octodad: Dadliest Catch was shown during the Sony E3 2013 conference, probably no one would have bet on the Young Horses title, thanks to a series of factors such as a not particularly brilliant and hasty presentation and a rather absurd protagonist already from the movements. In short, the first impression (which another old adage wants to be the one that really counts) was that of being in front of an absolutely negligible product. Will the octopus have succeeded after our test on Playstation 4 (and mindful of the “first round” on PC) to make us change our mind?

Nobody suspect a thing

Octodad: Dadliest Catch tells the everyday life of a family like many others, playing the player in the shoes of a father who lives surrounded by the affection of his wife and his two children. The only "small" difference from other families is that the father is an octopus, who lives on the mainland behaving like a normal man (dressing elegantly and walking around "on two legs").

Despite the many laughs and the general tone, there is also a lot of space for more committed themes

The purpose of the game is precisely to allow the octopus to blend in with humans, playing the part of the perfect family man through a series of situations that, being designed on a human scale, for a mollusk can be literally deadly (such as for example a visit to the aquarium, where the staff biologists “know how to recognize a fish when they see one”). The approximately three hours required to complete the campaign are therefore a succession of absurd and hilarious situations, but a lot of space is also left to themes that are anything but light despite the general tone of the production (such as diversity and the support that the family can give), with the result of accompanying the player to the end entertaining him. An end that, and is one of the biggest defects of the production, actually comes a little too soon, sacrificing a bit the appeal of a title that would otherwise be recommended without reservations.

From the point of view of gameplay, the product signed by Young Horses is a sort of sandbox philosophically very close to the platform. The purpose of the game (as mentioned) will be precisely to accompany the orange octopus while it carries out household chores such as cutting the grass or cooking hamburgers or going shopping, passing through the aforementioned trip to the aquarium and a visit to the game room. Regardless of the situation in which we find ourselves, the objective to be completed is indicated by a guide text on the screen, which will be "crossed out" in the to-do list style as soon as it is completed.

Where the production shines is on the front controls, the real flagship of the whole title

Where the production shines is on the front controls, the real flagship of the whole title: the two analog sticks will move one of the "upper" tentacles each, while by acting on the two dorsal triggers, control will pass to the lower tentacles, used as legs and movable at 360 degrees. The equipment is then completed by the X keys, to make the suction cups adhere to the objects and "take them in hand", and the circle, which can be used to collapse to the ground and hide when circumstances require it (for example to escape the gaze of the biologists mentioned above. ). The end result is that of a perfect exponent of the so-called Bushnell's law, easy to learn but really difficult to master: even climbing an escalator can become a feat playing Octodad: Dadliest Catch, and these motor difficulties together with absurdity of the movements of the octopus act as a perfect shoulder to the light and easygoing tone of the work. However, the infrastructure stumbles over the management of the camera, realized by means of fixed shots that in certain situations do not help the player where a mobile camera would have eliminated the problem.

The coop further increases the absurdity and the fun, especially with the roulette mode

It was said a little above of a not exceptional duration of the adventure. The defect is fortunately (at least in part) compensated by some incentive to replay value such as the presence of collectibles, three for each level presented in the form of ties, and by the free mode, which allows you to try your hand again in the levels already completed with the purpose to beat the time of developers. The strong point of this side dish is undoubtedly the cooperative mode, which gives each of the two participating players control over some limbs of the octopus leaving the others to the adventure companion, with the consequence of further increasing the laughter and the feeling of grotesque in controlling the orange clam. Considerations then brought to the maximum terms by the roulette mode, which randomly and without warning varies the limbs controlled by the players.

The beauty of the sea depths

On the technical front there are no particular problems to report, neither as regards the fluidity of the title (constant and practically free from problems) or as regards the visual sphere of the title, undoubtedly not jaw-splitting but very colorful and in line with the "mood " of the product. Nothing to report even from the acoustic point of view, thanks to a dubbing (only English, as unfortunately for the subtitles) at the height of the situation, especially as regards the gurgling of the protagonist, and a soundtrack capable of doing its duty .

Verdict 8/10 Octottimo Comment Octodad: Dadliest Catch, taking up the speech made at the beginning, teaches us that "do not judge by the cover" also applies when it comes to video games and that it is not so true that it is the first impression that really matters . Young Horses has, with the exception of the defects from the point of view of duration and of the camera, packaged a product that is quite atypical and out of the box, fun and absurd from start to finish but capable of tackling busy issues as well. Ultimately, absolutely to be recommended to all those who are looking for something different and, thanks to the ps4 titles situation, do not know what to play on the new flagship of Sony Pro and Cons. ✓ Fun and crazy
✓ Very successful checks
✓ Coop mode x It lasts too short
x Camera not always on time

Do you want to be a video game expert and know all the tricks, guides and reviews for your video games ? Holygamerz.com is a group of video game fanatics who want to inform you about the best tricks, guides and tips. We offer you the best information to be a reference in gaming, so here you can find guides, tricks, secrets and tips so you can enjoy your games to the fullest. Are you ready to get all the achievements of that game that you resist so much? Enter now and enjoy your favorite video game to the fullest!
Dying Light Review: The Following ❯

Double Cross Review - The Dimensional Guardians by 13AM Games