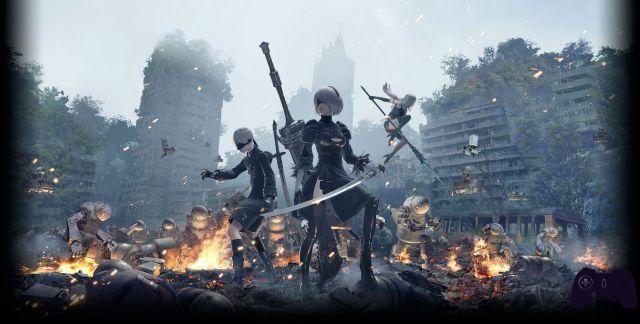 Released way back in April 2010, NieR on balance it is one of the best titles of the production Square-Enix of the last generation, despite the scarce commercial response from the public and the clear-cut criticism of the specialized critics (the same that today finds itself praising it without scruples) who branded it as a crude, uninspired and insignificant title. Anyone who has played NieR, however, knows how these statements are based on "nothing", demonstrating the little attention paid to the game of Yoko Taro at the time of its release. NieR is, and has been, a multifaceted play experience, an action-RPG that borrowed various gameplay elements and merged into a single (and new) form, capable of capturing the player and bewitching him with its unpredictable story. . Characteristic of NieR, it was precisely its ability to reinvent itself hour after hour, building narrative bases and then destroying them and going to far in other shores, offering also in this case something singular and difficult to compare.
Today, 7 years later, and contrary to all expectations, NieR is ready to return to the scene with a sequel titled Automata. After the close of Cavia, the team behind the prequel and Drakengard (the rib from which NieR was born), Yoko Taro returns to the Square Enix house, this time accompanied by another big name in the Japanese development landscape that is synonymous with guarantee when it comes to action titles: Platinum Games. Will this pairing, on paper more than winning, succeed in doing justice to the uniqueness of NieR? Read on and you will find out.

As in NieR, Automata also focuses heavily on the narrative aspect

NieR: Automata takes place 8000 years after the events narrated by NieR (and subsequent cross-media works), in an Earth on the brink of destruction. After putting the whole human race at risk and compromising the project shape (a program dedicated to building androids for the salvation of humans), humanity faced the advent of a new calamity. An alien race, armed with a powerful army of biomachines, attacked the Earth decimating the last survivors and forcing them to make a vital decision: to start an exodus by establishing a colony on the Moon, the Bunker, which will later become the stronghold of the resistance from which to fight this new war. The only hope of victory is entrusted to the hands of some humanoid androids, the YoRHa, whose task will be to eliminate the alien threat and take back their "home".

In NieR: Automata we will play the skimpy shoes of 2B, a sophisticated battle android whose purpose will be to support rebel outposts on Earth and take part in missions aimed at weakening the alien army. Obviously, during the first hours the situation will get out of hand, and 2B will find himself at the center of a conflict between humans and machines on which several shadows and many secrets hover.

As in NieR, Automata also focuses heavily on the narrative aspect. The story that glues all events will always be present and full of more or less predictable twists. Yoko Taro's narrative skill is poured into every single dialogue, in every facet of the game. Nothing is ever what it seems, and until we get to the end credits it will be difficult to know where the title is headed.

The characters of NieR are tormented and cynical creatures, cold androids who have developed an inner "I", who find themselves constantly struggling with rigid schedules and their own emotions, repressed for the greater good.

As we get underneath NieR's rind, we will come into contact with their human side and the complex psychology that characterizes them. What Yoko Taro was able to create (and in part "replicate") with this sequel is a unique alchemy with a strong emotional impact, where every component, every detail, even the most apparently insignificant one it represents a fundamental piece of a strongly orchestrated plot, but in its complexity, functional and successful. Of course, on such a complex and ambitious plot it is impossible not to fall into some lightness or some unanswered question, but on balance this too represents, like it or not, an aspect of the game itself, which prompts the player to question what he has just experienced, perhaps even venturing some convincing theory.

After having loved the first chapter, you play Automata with the constant expectation for something to happen at any moment. And that something is not long in coming. Once the adventure is over, NieR starts again, offering us a different perspective on history, this time entrusting us with the fate of 9S, I trust the sidekick of the lethal 2B. This second "round" will be fundamental, not only because it will revise part of the gameplay already seen (and which we will address shortly) but there it will offer new food for thought on the mass of events just experienced. It is difficult to write about a game as story driven as NieR, to venture inside trying to make you understand how much a story so complex and well told can make a difference, and how some of its unpredictable characteristics are its strong point. Here, without going into too much detail,

once the second “run” is completed, NieR reinvents itself again by throwing a whole new series of elements onto the plate, as if to pass what has been done up to now, like a simple appetizer.

From this point of view Automata follows what NieR did, with a series of endings, more or less canonical, mandatory steps to arrive at the only, true, epilogue that marks the end of Automata in an “indelible” way. The genius of Yoko Taro then lies in also inserting another handful of Joke Ending, alternative endings which, once the unlock condition is activated, will lead us hopelessly to the end credits.


During the game we will be able to intersperse our adventure by allowing ourselves moments of freedom, by completing some of the 60 side missions that will be available. These will offer various challenges, and will be used to collect information about the game, archives of a lore necessary to understand most of the events narrated in NieR. Events that, contrary to what the developers themselves said in the past, they take root deeply by binding to those of the prequel, making it a fundamental title to fully enjoy Automata. In fact, during the adventure there will be (large) references to past events and situations, as well as the entry on the scene of well-known characters from the narrative universe of NieR, will transform these into "special" moments for fans.
Between one thing and another (secondary missions, completion of the endings, various collectables) it will take approximately 40 to 50 hours to complete everything, depending on how much you dedicate yourself to deepen your knowledge of the world of NieR or the chosen difficulty level. 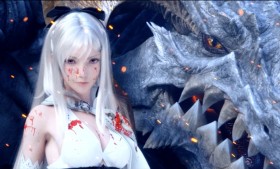 To learn more:
Drakengard 3 1 2
Do you want to be a video game expert and know all the tricks, guides and reviews for your video games ? Holygamerz.com is a group of video game fanatics who want to inform you about the best tricks, guides and tips. We offer you the best information to be a reference in gaming, so here you can find guides, tricks, secrets and tips so you can enjoy your games to the fullest. Are you ready to get all the achievements of that game that you resist so much? Enter now and enjoy your favorite video game to the fullest!
Guides How to catch Shiny Celebi in Pokémon GO [Guide] ❯