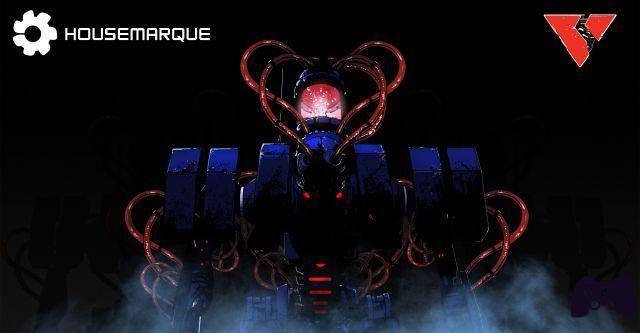 Nex Machina is a circus of references to Housemarque's past (and future), which at the same time stages a spectacular tribute to the era of cabin cruisers.

That of "love letters" (especially when they are better than our apology letters) is a kind of product that we come across now more and more often: tributes - genuine or not depending on the case - which pay homage to styles, trends or more simply software houses and titles of the past. And if it's true that no one can love you as much as yourself, then Housemarque with Nex Machina (the first title that the developer publishes independently) has certainly hit the mark. All the stylistic code of the studio behind Resogun and Alienation, mounted with an arcade frown like never before Housemarque had shown - inevitable, given that the credits also include the name of Eugene Jarvis, the father of the arcade hit Defender.

What is Nex Machina? It is Housemarque without filter. Like cigarettes

What love letter at the time of the cabinets would it have been by inserting unnecessary trappings such as plot, narration and even the context in Nex Machina? Housemarque does not fall into temptation and, forgetting the attempts sketched in Dead Nation and then recalibrated in its alien spiritual sequel, shoots without filters his creature of neon and strobe lights in front of the player's retinas. No opening words, no tutorials, nothing at all: the initial screen asks you to press x to continue (the closest equivalent of the classic "insert coin" that could be inserted on the screen) and then asks those in front of the screen to choose the mode between arcade, co-op (only local, at least for the moment) and single level - which as we will see shortly allows you to replay the five levels in which the main "campaign" is divided in search of the various secrets that are hidden there. That's all, no manuals, turns of words or other things to soften the approach: you take the pad and shoot, since the controls are what every fan of twin stick shooter is used to by now - a lever moves, the another shoots and directs the fire, triggers and backbones (depending on which side they face) trigger the trigger and secondary weapon.

In short, a 100% vintage heart - and having to be honest, the suspicion that the exclusion of the online cooperative derives from this precise stylistic decision is there, but it doesn't make the pill any sweeter - designed precisely to pay homage as never before to the golden age of the cabinet, where tokens and coins of one hundred lire were the closest to sacred relics. And we still are only on the surface.

Nex Machina is vintage not only in the mood, but also in terms of level design. But always pushing on the accelerator

Nex Machina does not limit itself to paying homage to rooms and games and cabinets from the point of view of attitude and approach, but digs deeper and also offers a level design strongly influenced by the style of those years - even with all the modernizations (and the aforementioned stylistic code) of the case. The five playable maps are divided into a series of limited areas, thus not allowing the free exploration that was seen in Dead / Alien-ation. The advancement from area to area is automatic, and occurs whenever you have got rid of all the enemies on the screen. We invite you to re-read the last sentence: advancement is automatic, this means that once the latest Cablepunk devilry designed by the developers has been shot down (taking up a definition given by Housemarque itself, the Cablepunk is basically the vintage version of Cyberpunk) we move on to the next picture. Without the possibility of appeal, without the possibility of collecting any upgrades left on the ground or completing the destruction (and exploration) of the map segment. Yes, because having separated the maps into more claustrophobic pieces did not stop the developers of literally cram every glimpse of secrets, ranging from crates containing upgrades - shield, explosive dash, and so on - and secondary weapons (six, all fairly traditional for the genre) to secondary exits, which once found (and cleared the area) cause a transition of area other than that normally provided for by the level. But as we said Housemarque has practiced citing herself, and if the system in general recalls the aforementioned Alienation (albeit with the obvious differences expressed up to this point) there is no lack of elements taken from other titles of its past, the bright colors of the Super Stardust series or the obvious reference to Resogun given by the presence of humans to be saved on the map (whose indicator on the HUD is taken up almost entirely by Resogun). All according to the style - for example, it must be said that every destroyed object will explode into cubes, recalling the trailer of the now imminent Matterfall - or the score, since humans if they are saved give a bonus from this point of view but , while on the map, they act as a distraction for all enemies on the screen. Would you risk one of your precious lives (depending on the mode Nex Machina still allows a certain number of “Continue”, which however reset all the upgrades collected up to that moment) for extra points or is it better to save your skin? The choice is up to whoever plays, depending on the direction that events and the game are predending. 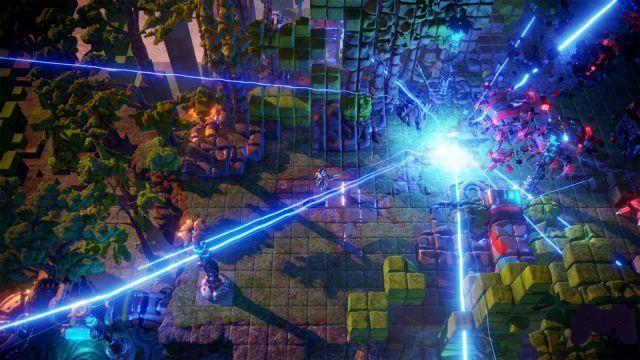 Moral of the story: Nex Machina has to be played and played again, going deeper and deeper to unravel its secrets and try to aim for the highest possible score. A choice that in addition to bringing the player back to his reference arcade of the time gives a new flavor to the choice of inserting only five maps in the game - already in this way the contents are potentially such as to overwhelm - and makes the single level mode a precious ally when you decide to sift through a map. Once you get bored then there is the possibility to play the same ones with some modifiers, which require you to complete everything within a certain time limit or add other specific conditions.

But if the beating heart of the product refers to the arcades, the surface - its graphic aspect - is instead in its own right a modern product, with all the canons of a 2017 video game. Housemarque has undoubtedly given us inside, and Nex Machina as mentioned is a riot of neon, lasers and lights that treat the player's retinas with little regard (and it is absolutely a compliment). The final result undoubtedly has character, almost a test of maturity from a technical point of view on the part of the team - which not surprisingly in some clips also grants some directorial license and makes the shot vary, bringing it behind the player instead of shooting him from above. The whole while the performance remains constant, without showing the side from the point of view of the frames per second even in the most messed up situations, with hordes upon hordes of robots on the screen that fire as if you were playing a bullet hell game.

Verdict 8.5 / 10 Housemarque making p * mpini ad Housemarque Comment The verdict on the left (or here sora, if you read us on mobile) is clear: Nex Machina is a successful self-celebration of the Finnish studio, which puts all that on the plate has to offer and packs a perfect hybrid between a business card and a frantic homage to the golden age of arcades. Yet another twin stick shooter not to be missed therefore for all fans of the genre, who despite finding quotes and similarities will immediately understand that they are in front of a product with a fundamentally different soul from the survival Dead Nation - but also from the more adrenaline-fueled Alienation. In short, for old-time enthusiasts a confirmation, for those who have never boarded the Housemarque ship the opportunity is really one of the best possible (especially because until day one there is a 20% discount on the price price list, € 19.99). Good Cablepunk everyone. Pros and cons ✓ An incredible tribute to the cabin cruisers and to Housemarque itself
✓ Visually spectacular
✓ Pure adrenaline x If I wanted the Alienation RPG progression, it's not there
x Local Co-Op only
Do you want to be a video game expert and know all the tricks, guides and reviews for your video games ? Holygamerz.com is a group of video game fanatics who want to inform you about the best tricks, guides and tips. We offer you the best information to be a reference in gaming, so here you can find guides, tricks, secrets and tips so you can enjoy your games to the fullest. Are you ready to get all the achievements of that game that you resist so much? Enter now and enjoy your favorite video game to the fullest!
Special Stories from Life Played: Dark Souls and the Lone Player Drama ❯

The Evil Within 2 review