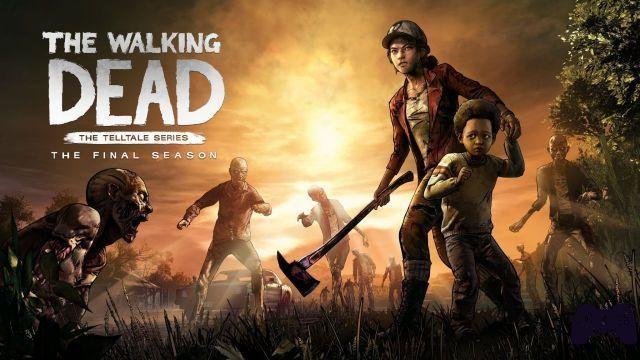 Telltale Games announces, via press release, that the first episode of Telltale "The Walking Dead: The Final Season " is now available for download.

- Launched today on PC, PlayStation 4 and Xbox One for all regions of the world, the first installment of the season “Just Escape” will be available on Nintendo Switch in Europe and other regions later in the month. -

Well-known publisher and developer of digital entertainment products Telltale Games and Robert Kirkman's Skybound Entertainment today launched the inaugural episode of The Walking Dead: The Final Season, the new four-part game series in which Clementine, the iconic survivor created by Telltale, it will bring its adventure to a close.

The first episode "Just Run" is now available for download on PC, PlayStation 4 and Xbox One in all regions of the world. On Nintendo Switch, the title is available digitally in North America and will launch in other regions later in the month. The price of the whole season is 23,99 EUR. The first episode can be downloaded immediately upon purchase, and all subsequent episodes will be immediately available for download on the day of release.
Voice packs and translations are already available for download within the episode. The Walking Dead: The Final Season is available in full dubbing in French, German, Latin American Spanish and Brazilian Portuguese. Subtitles are available in French, German, Latin American Spanish, Brazilian Portuguese, Italian, Russian, and Traditional and Simplified Chinese.

Description of the season: Clementine, now a proud and proven survivor, has reached the last chapter of her journey. After years of vicissitudes and living and undead threats, a school isolated from the world could finally become his home. But protecting it will require sacrifices. Clem will have to build a life and demonstrate leadership skills, while taking care of AJ, the orphaned boy who represents her only family since she left. In this dramatic and exciting final season, you will have to define your relationships, fight with the undead and determine the ending of Clementine's story with your every action.


To date, The Walking Dead: A Telltale Games Series has sold more than 50 million episodes worldwide, winning over 100 Game of the Year awards from critics, including Metacritic, USA Today, Wired, The VGAs, Yahoo !, The Telegraph, Mashable, Polygon, Destructoid and GamesRadar. It also received two BAFTA Video Games Awards in the Best Story category.

The Walking Dead is set in the world of Robert Kirkman's award-winning comic book series and offers a highly thrilling experience where player choices determine the course of the story for the entire series. To carry the fruits of their choices into the new season, players will have the option to import existing save files into The Final Season. More information is available on this blog (currently, only in English). Additionally, players will be able to complete the interactive Story Builder within The Final Season to relive Clementine's journey and create a new custom save file.
For more information on the game visit the official website and Facebook page and follow Telltale Games on Twitter. For more on The Walking Dead, Robert Kirkman and all the author's titles visit Skybound.com.

Source
Do you want to be a video game expert and know all the tricks, guides and reviews for your video games ? Holygamerz.com is a group of video game fanatics who want to inform you about the best tricks, guides and tips. We offer you the best information to be a reference in gaming, so here you can find guides, tricks, secrets and tips so you can enjoy your games to the fullest. Are you ready to get all the achievements of that game that you resist so much? Enter now and enjoy your favorite video game to the fullest!
News Monster Hunter: published a celebratory video ❯

GDC News 2019: Ubisoft and id Software in the lineup of those present