120 beats per minute of pure exaltation and adrenaline; under the hood of the flamboyant bathrobe resound the notes of the soundtrack of an old film about boxing starring Sylvester Stallone, unspoken world anthem of every pre-race since 1982. But this is not a movie, tonight we make history. Around the ring it is sold out, the cries of the agitated public, made up of bookmakers, bettors and enthusiasts, overlap to become a barbaric cry capable of shaking the building from its foundations. The presenter, in a pompous and blatant tone, first announces the name of my opponent, the world champion, an arrogant and elderly thug known as Super Machoman; he says he is 28 years old, in my opinion he has them for his leg, but he still treads hard, I have to admit. The public is in raptures, the odds are in his favor, 29 wins and 3 defeats speak for themselves. My coach whispers in my ear: "that's a balloon full of botox, go and blow those little princess cheekbones!". I know I can do it, the audience will enjoy a nice tribal concert when I slam my gloves in the face of that sort of Mister Olympia greased with suntan oil. The speaker mentions my name: "... and in the right corner, the challenger, the usurper to the throne of world champion, the blonde fury protagonist of an unstoppable rise ... The frail and powerful ... LIIIIITTLE MAAAAAC!". The heart is now a drop of water ticking at regular intervals on the ceramic of the sink; only one sound echoes in my head: that of the bell that starts the first round.

When the first chapter of the boxing series Punch-Out !! was released on NES in 1987 (after the debut on cabin cruisers around the world), all sports fans were in full noble art fever, thanks to the saga of Rocky Balboa, to the masterpiece Wild bull by Martin Scorsese but above all to the rising super star of the ring, Mike Tyson (which will also be the prefix of the US version of the title, where Iron Mike will appear as the final boss, all thanks to a hefty remuneration), who, one year after his professional debut, in 1986, snatched the world champion belt at Trevor Berbick, after an impressive one-year streak of knockout victories.

nintendo rode the wave of the exciting new era of 80s-90s boxing by launching the Punch-Out series !!

Thanks to this atmosphere, the success of the title was immediate, both thanks to fashion and thanks to the quality of the game it offered a videogame boxing unique in the young panorama of the time. The advent of Super Punch-Out !! it coincided instead (curiously) with Tyson's years of the sky with vertical stripes, thrown in prison on the ignoble charge of sexual assault. But that's another story indeed, we are interested in the career of the skinny Little Mac and his rise to the pantheon of the best virtual boxers! The second part of our favorite's career begins in the United States, in 1994 su SNES (think that it will arrive in Japan 4 years later, to testify the distinctly Western soul of this sport), with all new graphics that are more animated and exaggerated than ever. This is just what immediately catches the eye of the aspiring videogame boxer, the immortal quality of the animations and characterization of the characters. If you've taken a look at the epic Super Machoman encounter above, you've already seen it; thanks to a first-rate technical department, the meetings look like episodes of a typically Japanese sports-themed cartoon (another fashion of that period, we all grew up!), complete with an animated audience to perfectly frame what is a real dance. But if it is true that for women "there is more besides the legs", also for Super Punch-Out !! the technical aspect is a fantastic detail that embellishes a canvas of great videogame relevance.

Come here I swell you!

What is most surprising is how the developers managed to capture the essence of boxing, obtaining a very tasty concentrate that will make us feel immediately in the ring from the first meeting (against that unfortunate mustachioed Frenchman Gabby Jay), thanks above all to the almost perfect controls and a total feeling with our alter ego and his gloves. Beating hooks and direct at random is the best way to prematurely finish KO, the style of play must necessarily be tactical and reasoned, between dodges at the last second and consequent one-two on the opponent's nose. The feeling of having actually landed a punch is fantastic, accentuated by the bewildered and confused expression on the contender's face and by sound effects worthy of the best Bud Spencer and Terence Hill films. 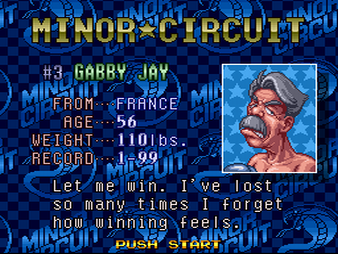 Poor Gabby… A punching bag armed with baguettes would be more formidable!

Super Punch-Out !! has in its code the true soul of boxing ... And what a satisfaction to KO opponents ...

Two of the front buttons they will command Little Mac's left and right arm, the other two will be used for the Power Up mode, which will increase the speed and strength of the punches, and for the Knock-Out Punch, a very violent blow that can be used after filling the appropriate bar without being hit . The directional cross it will naturally be used for dodging, to the right and left, to parry the punches towards the face (up) and to dodge the hooks (down); moreover, the “north” direction of the d-pad will allow, together with the buttons of the shots, to aim in turn the ugly face of the challenger on duty. All this translates into one of the most truthful “easy to learn, hard to master” ever. Suffering resounding blows, after the mattress encounter with Jay mentioned above, is a matter of a few meetings; learning the patterns and types of strokes of the opponents quickly becomes a necessity, transforming the title into a continuous enigma in motion. The most bizarre and devastating opposing blows almost always correspond to well-aimed direct hits to be launched at the right time with which to turn the situation over to your advantage: but only practice makes perfect boxers. A fundamental stage of this path towards the belt is the nervousness that will climb from the fingers to the brain, acting as a spur to face yet another retry, accompanied by a growing desire for revenge aimed at removing that expression of sufficiency from the Bald Bull's face. on duty. The moment of the decisive punch is capable of giving a rush of adrenaline and unique satisfaction, perhaps after being knocked down twice each (three times correspond to the final KO within 3 minutes of time) and with a small section of energy still available. 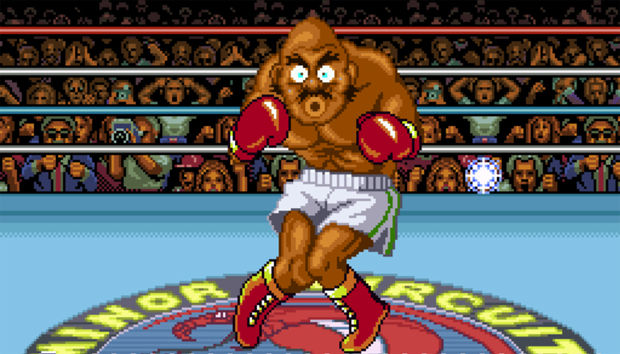 What a satisfaction to see that expression… Priceless!

Fighting, losing, learning, returning to the ring and winning: this is the path that every player will have to face on the road paved with fatigue that will lead to the top of the world. Super Punch-Out !! it's an extremely dynamic title, incredibly playable, challenging and especially funny, made absolutely current by his deep mechanics and so precise as to make it immortal: is the Super Mario World of fighting games! And then there is the whole outline ...

Stereotypes and irony enter the ring!

... all out of all logic and charismatic!

Yes why the other great strength of the title is its frame, That made up of wrestlers who sometimes follow the cultural stereotypes of their country of origin, other times they are just crazy and over the top. There is Bob Charlie (do you find an assonance with some immoral reggae singer by chance?) Jamaican dancing with typical rasta hairstyle, Dragon Chan, definitely inspired by the unforgettable Bruce Lee, who despite being a boxer decides against all rules and common sense to hit devastating kicks by bouncing on the ropes at the ringside; without forgetting characters like Masked Muscle (fighter ... Masked ... good, he's Mexican!), "slightly" incorrect in his attitudes, so much so that he spits Tequila in Little Mac's eyes at the first opportunity, but here everything is valid! Honorable mention for Mad Clown, Italian clown (need to add more?) lover of juggling, so passionate that he uses his party tricks for children in order to make us capitulate. But it is more disturbing than Kingiana's It memory! 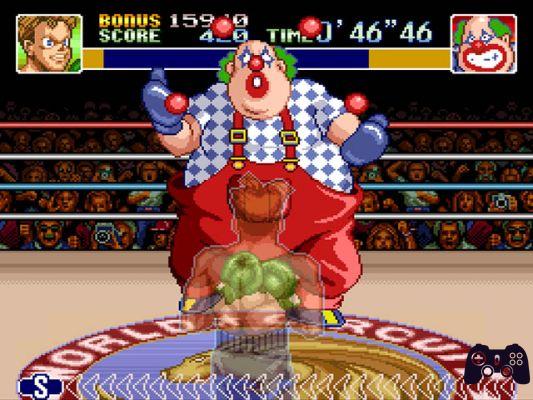 In short, the peculiarities of each character have been used by programmers to create ever unpredictable encounters, with moves as strange as they are harmful to which you must pay absolute attention, reacting quickly if you do not want to incur a premature KO The funny dislike that they transmit just by looking at them is also part of the game and induces in the player a not indifferent desire for victory, leading us to want to hit them more and more effectively.

Will the new contender be able to take the throne?

After this episode, however, the series was shelved, with Little Mac busy in the ring of Super Smash Bros., returning to his first passion only many years later, with the advent of Wii, in a very pleasant episode based on motion control. But soon, with the blossoming of cherry blossoms, the true heir of Punch-Out will arrive on the newborn Switch, a 2.0 version that represents a rebirth for the nintendaro boxing genre, abandoning its classic “realistic” setting and its characters, to embrace a more “Splatoonian” style; we're talking about Arms, fighting game based on spring gloves that we have also talked about on these pages. However, the climb to success has only just begun, will the young rival be able to prevail against his classic predecessor? For our part, we sincerely wish it. In the meantime we continue to enjoy these fist fights on the Virtual Console of our 3DS! 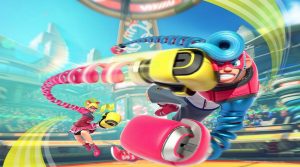 To learn more:
Arms
Do you want to be a video game expert and know all the tricks, guides and reviews for your video games ? Holygamerz.com is a group of video game fanatics who want to inform you about the best tricks, guides and tips. We offer you the best information to be a reference in gaming, so here you can find guides, tricks, secrets and tips so you can enjoy your games to the fullest. Are you ready to get all the achievements of that game that you resist so much? Enter now and enjoy your favorite video game to the fullest!
Borderlands 3 review: a shotgun shot, a shield defense. ❯

Cuphead special: the development of a much anticipated cup

Special Who is really the protagonist of Dark Souls III?

Animal Crossing New Horizons Special: A jump down… the tube

Special What would real life be like if we were in The Sims?