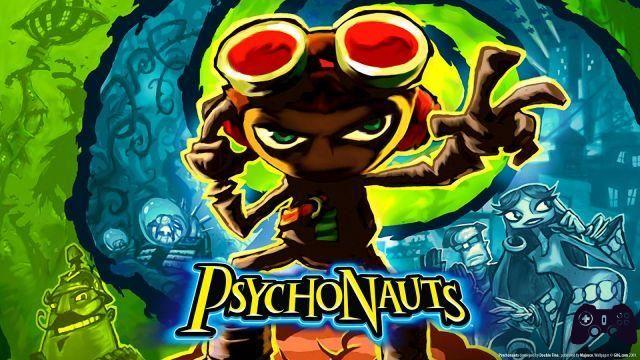 Let me tell you about a game called Psychonauts. A quick consultation at Metacritic would briefly present it to you as “a good 3D platform”; I believe instead that it carries with it a great symbolic value. For example, as when it comes to fast-paced shooters, we inevitably end up mentioning DOOM and Quake; Psychonauts is my definition of cult classic. This means that, as wonderful as it is, hardly anyone actually played it when it came out in 2005. Starting a few years ago, the situation is changing, the title is increasingly present on the lips of fans; a release on Steam and plans for a second chapter contribute to its fame.

Nonetheless, its story begins in the 90 years, in the offices of the legendary Lucasarts. With Day of The Tentacle already in the curriculum, the developers set to work on the graphic adventure Full Throttle. In this game, among the various sequences, the protagonist Ben would have to face a psychedelic journey within his own mind. The idea did not go down well with the father of Star Wars and the other company officials and the sequence was removed, perhaps due to possible references to hallucinogenic substances in a decade in which War on Drugs was raging.

Team member who found himself censored was Tim Schafer, a real videogame legend whose exploits echo almost everywhere, so much so that he will be the godfather of Milan Games Week 2017. Proving himself up to his reputation, he did not abandon such a crazy idea and several years later he founded Double Fine, whose first project was Psychonauts: a Banjo Kazooie-flavored 3D platformer, in point-and-click sauce, on a bed of Burtonian black humor and with plenty of originality. 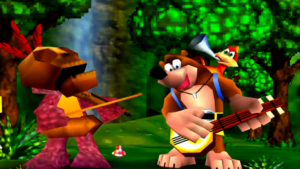 Psychonauts is a bit of a Banjo ... 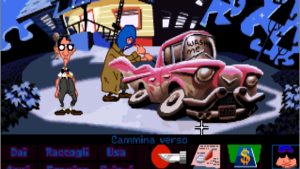 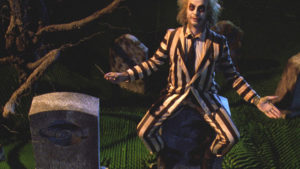 … And a little Beetlejuice.

From the mind of Tim Schafer

I introduce you Razputin, a boy with a difficult childhood, who escaped from the family circus enterprise to pursue a dream: to become a Master of the mind, a Psychonaut. We find him therefore in the Whispering Rock Psychic Summer Camp, where he takes lessons with other kids to develop their mental abilities. Powers such as telekinesis, pyrokinesis and levitation will be unlockable during his training and will act as platform mechanics. But the real revolution is hidden inside a small door-shaped gadget: it will allow Raz to enter the mind of others (here's how Schafer avenged the "mutilated" Full Throttle). The tool will accompany the aspiring mentalist even outside the school, when the latter will be the victim of a threat: he will have to face an unexpected journey between victims of trauma, paranoid subjects, and real madmen to be tied up.


So, while our protagonist will learn about his powers, we the players will learn about the characters that we will (literally) explore, and begin to understand the true strength of this peculiar adventure. 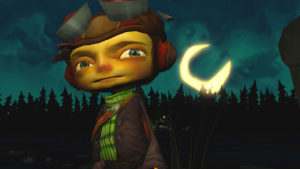 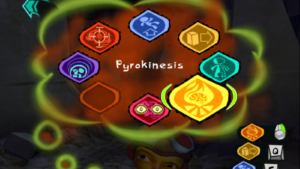 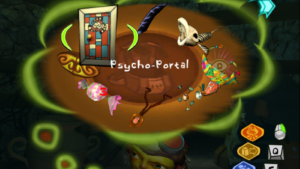 "A psychic odyssey in the minds of misfits, monsters and madmen"

So we read on the back of the game packaging, in one of the most apt captions in the history of videogames. Psychonauts makes his winning decision in choosing a good but simple plot: a protagonist with a difficult past wants to chase a dream but an evil entity threatens his life and that of his friends. The real odyssey we are talking about takes place within the subconscious, and is told through a phenomenal narrative system that blends classic methods with excellent cutscenes and, finally, with the level design itself. It is the levels themselves that tell us about the people we will meet.


For example, the crackling, colorful mind of an (apparently) carefree woman is a huge 70's nightclub, complete with flashing lights and disco ball. But going deeper and deeper, hidden among the strobe lights and flashy fantasies, they will begin and find nightmares and feelings of guilt locked in a cage: their piercing cries are lost in the roar of funky music. Here is the psyche of a strong person, who managed to leave behind a terrifying past. The player can choose how far to go in depth by exploiting the "collect-a-thon" element of the game: among the numerous hidden collectibles (perhaps too many?) The safes stand out, containing the most frightening memories of the host: once opened they will present themselves as slides and shed light on his past. These are often moving and memorable experiences. Here's how Psychonauts rewards the best explorers in an original and special way, not limited to a counter of "objects found / total objects". 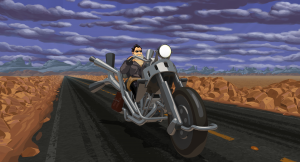 The setting just described is one of the first we will venture into: as the game progresses, guests will become more and more unpredictable and absurd. Take Black Velvetopia, the subconscious of the troubled Mexican painter Edgar Teegle who lost his previous job and, with it, the woman of his life. In order not to break down and not give in to anger (depicted as a huge crimson bull, El Odio, raging through its neural pathways), Edgar has filled his brain with frescoes and paintings: our protagonist will make his way to Velvetopia using the art.

Another example is "The Milkman Conspiracy", perhaps the most successful chapter of the entire game. Without going into the details, which I will let you discover for yourself, it is the mind of a paranoid conspiracy theorist and looks like a twisted town in which every object hides a surveillance camera. In this level it will be necessary to deal with a constantly changing gravity (anticipating Super Mario Galaxy by two years!) And with a platoon of secret agents, which we will have to deceive through various camouflages. 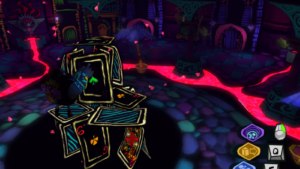 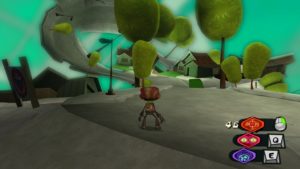 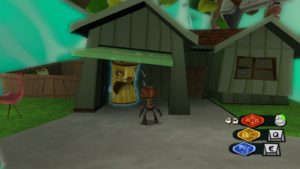 One of the many collectibles

Each of these characters, from the most stoic to the most schizophrenic, is a lasagna with numerous layers of repressed secrets and emotions. But mind you, Psychonauts doesn't aim to move you: the game is still a pleasure to watch today, and every polygon is infused with an extravagance that brings to mind the Tim Burton of the heyday. This is both from the graphic point of view, with its characters with olive skin and caricatured features, and from the point of view of the themes and dialogues. The taste for the black humor, never exaggerated or out of place, it is the same as Beetlejuice or The Corpse Bride: many have tried, but few have been able to be so pungent and acid without being offensive and cloying. We will inevitably end up for sympathize with all the crazy and we will look with hatred at the pathologies that make them suffer. All this is accompanied by an excellent soundtrack that at times seems to be the result of the genius of Danny Elfman. Too bad only for one somewhat complicated control system: wallowing in the synapses of others can be frustrating, but this rarely happens; even the user interface is not always easily “decipherable” (genetic trait perhaps due to the close degree of kinship with the graphic adventures that Schafer and his cronies developed in Lucasarts).

Then send in the Psychonauts!

Guys, the thing is this: this game has been talked about for a long time. I had to meticulously choose what to report in this retro review and what not, but that's because I believe that with more spoilers I would ruin the surprising weirdness of this little work of art, in fact unique in the world of video games. The recent release on PlayStation Network which it joins the Steam version they should make it accessible to most of you: for a price that never exceeds ten euros, it is a purchase that I highly recommend.

And who knows, maybe you too will join the pack of madmen who are eagerly awaiting the return of Raz, to be accompanied once again in the mind of Tim Schafer: this, if all goes well, will happen in 2018. 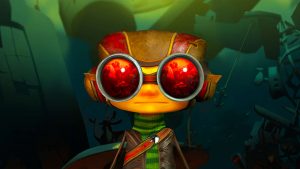 To learn more:
Psychonauts in the Rhombus of Ruin
Do you want to be a video game expert and know all the tricks, guides and reviews for your video games ? Holygamerz.com is a group of video game fanatics who want to inform you about the best tricks, guides and tips. We offer you the best information to be a reference in gaming, so here you can find guides, tricks, secrets and tips so you can enjoy your games to the fullest. Are you ready to get all the achievements of that game that you resist so much? Enter now and enjoy your favorite video game to the fullest!
News + The Pathless as Shadow of the Colossus: the uselessness of a map ❯

Special Piracy and video games: when the future is in the past