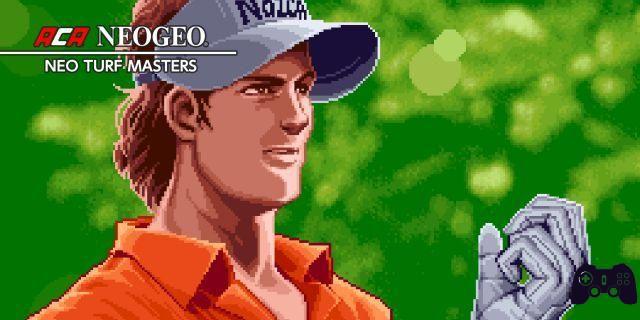 A sport immersed in the most luxuriant nature, including swaying hips, elegant steel clubs, great precision and improbable attires! This is golf, an elite activity that became pop thanks above all to SNK and Nazca, authors of the Neo Turf Masters arcade. Ready for the swing made in 1996?

Relegations is a weekly column, which turns the clock back and pseudo-critically addresses titles that have made history. Or even not, but which for one reason or another we considered worthy of mention and capable of arousing reactions to the “Luci a San Siro”.

Spring is in the air, swallows dart in the clear blue sky, the smell of cut grass acts as a natural calming. What a beautiful day to play golf, even if this story of the half seasons that no longer exist I begin to suspect is true, there are 30 degrees and this synthetic pole is melting on me. Not bad, we are now at the eighteenth hole, they are ahead by one stroke, -12 against the -11 of that annoying Australian who has already finished; I just need a Par and, coincidentally, I'm right on the green 2 meters from the hole, a breeze! My trusty caddy clenches his fists as he looks at me, in charge, while that beautiful blonde in the audience winks at me. Or maybe she got a gnat in her eye? No I'm sure it was a wink, spare. A deep breath, I gently move the club to the right and then a flick of the wrist to the left. The white ball rolls, rolls, rolls towards the edge of the hole, the trajectory becomes like the old parabolic of the Monza racetrack, picks up speed on the slight slope and shoots away. I stare at that damned sphere without batting an eye, I turn to Paul the caddy who has his jaw on the ground; I turn to the blonde, who is kissing that half Australian golfer. Failure has only one name: Bogey. The steel club bends in my hands as if it were a paper clip. Who said golf is a relaxing sport, damn it?

A walk in nature with a club in hand ...

It would be nice to write a playful story entirely about this title, also because there are many anecdotes of this kind during the matches, also thanks to the atmosphere that reigns on the pixel art fields of the Nazca title, license plate 1996. A curious date, because with this game golf definitely became pop in videogame culture, just a year before the sport played by real athletes was cleared through customs by its greatest champion, that Eldrick Tont Woods, better known as Tiger, who in 1997 won his first tournament The Masters, one of the four most important of the PGA Tour. One to which they then named the most famous series of golf video games by Electronic Arts, one that really seemed to play with a pad in hand, just watch this video to understand.

But those who in the mid-90s couldn't join a golf club could head to the nearest arcade (or buy a Neo Geo), armed with coins and lots of patience, to tackle the 4 18-hole courses of Neo Turf Masters. What the ancient but very stylish 2D graphics engine shows us are small cross-sections of four countries located at opposite poles of the world, Germany, Japan, the United States and Australia, among woods, palm-fringed beaches and the lands carved by the Colorado River of the Grand Canyon .

The class shots are placed at each hole, starting with the very dynamic animations of the 6 virtual golfers, each suited to a particular style of play.

Even the alternation between the two views, behind the golfer and from a bird's eye view, is elegant and classic for the genre until the advent of Mario Golf 64 and Everybody's Golf in the late 90s, with all the innovations of the new 3D graphics engines. Visually, however, an honorable mention goes to the skits that close each hole, where our golfer will go crazy for a Birdie, be satisfied enough for a Par or be pissed off for a Bogey or worse, with a lot of public behind him and commentator who will describe the deeds of Player 1 in front of the tournament ranking. A nice and pioneering idea, even if in the mind of the player there is always a little Piccinini who says “Calzati's incredible shot! Just him! 'cezzionale! " 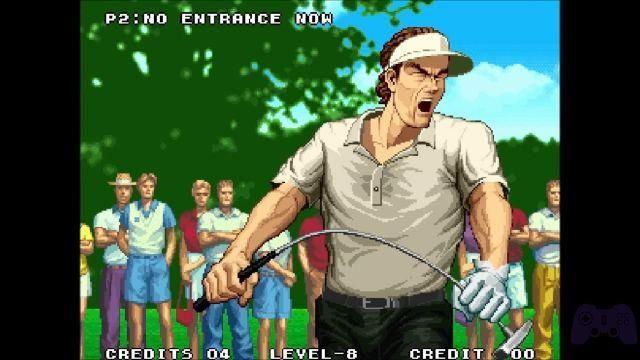 “Is that your final answer? Shall we fold it? "

However, Neo Turf Master is a virtual oxymoron

However, Neo Turf Master is a virtual oxymoron. Golf, in itself, is a thought sport, which for the athlete turns into a strange form of yoga; before making the swing, with the characteristic "waddling" that the activity requires, interminable seconds, if not minutes, can pass when the shot or the situation requires it. Here, however, this Zen practice collides with some classic arcade elements: the timer and credits. Not only will we have a time limit to shoot the ball to the stars, but above all we will have to keep a frenzied pace to go under the Par at least one hole each other. This is because with each shot the number of holes at our disposal drops by one, even by two if we end up with one or more shots above the allowed, while we will earn a hole in the case of Birdie and Albatross. Obviously, once you get to zero, the disqualification will trigger, sorry, the Game Over; a bit of a Hunger Game in a golfing style. All this was certainly very useful in the arcade, since it takes at least 18 minutes to complete the fateful 18 holes, and time is money that does not enter the operator's coffers. Instead, it is a little out of place with home use (this is a slightly fake demotion, because I played it on the latest console launched on the market, Switch), even if it must be said that urgency can also add that extra pepper. for lovers of challenges. You can also earn credits with just the push of a backbone, but it would be like performing a Putt with the sides of the baby-bowling alley. To win the four tournaments we will therefore have to arm ourselves with patience, concentrate and pull out every last drop of class. At this point we will have to choose the club that best suits us, control the direction and strength of the wind, choose whether to give effect to the ball and decide whether to hit it up or down, based on our desire to see the white ball plant itself quickly on the ground or let it run freely on the green fields, to take advantage of the whole Fairway. A full-blown 2D simulation, where obviously the physics of the ball lacks a little, simply because it has none of physics. Everything is based on the cryptic calculations that the in-game game does (I asked our webmaster Pietro for clarification, since I didn't want to write a nonsense), based on how we decide to hit. However, its behavior, especially in the case of shots from the sand bunkers or the differences in height scattered for the Putt, will almost always give an excellent feeling, while in rare cases we will see our shot end up in a waterfall despite favorable wind and a I shoot with all the trappings. An eventuality that will take us further and further away from this moment: 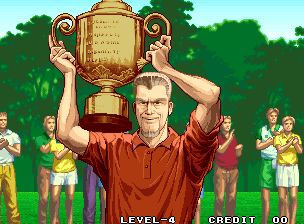 All the charm (?) Of a golf champion

And don't we want to close by talking about the soundtrack? Of course we want. A soundtrack that, like the rest of the atmosphere, is classy and snobbish, perfect to listen to on the speakers of our brand new Caddy, as we whiz from hole to hole (unfortunately, the drivable caddies, in a golf videogame, will truly arrive alone. this summer with the new Everybody's Golf on PS4 apparently, what a lust, to lick the iron 9).

16-bit jazz rhythms from relaxing to pressing accompany each spectacular shot, hoed in the sand, joy and pain, with sounds that bring to mind other worldly classics, such as OutRun and its Testarossa, an ideal vehicle to show off at the trusted country club; on the other hand its front trunk is just tailored to accommodate a set of clubs.

Do you want to be a video game expert and know all the tricks, guides and reviews for your video games ? Holygamerz.com is a group of video game fanatics who want to inform you about the best tricks, guides and tips. We offer you the best information to be a reference in gaming, so here you can find guides, tricks, secrets and tips so you can enjoy your games to the fullest. Are you ready to get all the achievements of that game that you resist so much? Enter now and enjoy your favorite video game to the fullest!
Doom Eternal review: metal soul, hellish heart ❯

Special E3 2017: Practical guide to everything you need to know