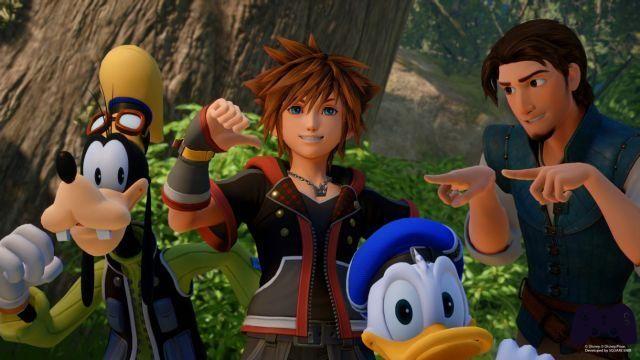 KINGDOM HEARTS III IS NOW AVAILABLE
ALL OVER THE WORLDSQUARE ENIX and Disney take players on a wonderful adventure
where they can explore the fantastic Disney and Pixar worlds of Toy Story, Frozen, Rapunzel, Big Hero 6 and more

Both longtime fans and newcomers alike will follow the fantastic adventures of Sora, a young hero of the Keyblade who is tasked with protecting the universe from evil forces known as the Heartless. Sora, with the help of his faithful companions Donald and Goofy, or the emissaries sent by King Mickey from the Disney Castle, will join the most famous characters of Disney and Pixar to try to defeat the darkness and save the universe.

“I am delighted that KINGDOM HEARTS III is finally available,” said Tetsuya Nomura, Director of the KINGDOM HEARTS series. “The story is full of mysteries, so players can take it easy not to miss any details. Adventure is in the journey itself, not just in the final destination. This story represents one of the greatest experiences ever lived by Sora and his friends, so I really hope the players like it. To all our fans around the world, thank you for waiting patiently for this day to come. "

"KINGDOM HEARTS III is the continuation of a fantastic long-lasting creative collaboration between Tetsuya Nomura, the worlds and characters of Square Enix and Disney," said Sean Shoptaw, SVP, Global Games and Interactive Experiences, Disney Parks, Experiences and Consumer Products. “The new chapter in this fan-favorite series is the perfect result of our philosophy of combining Disney and Pixar characters and worlds with the best gaming partners and giving them the flexibility to create something magical and unexpected. We are delighted that today fans can finally enjoy this title. "

KINGDOM HEARTS III is now available on the PlayStation®4 digital entertainment system and on Xbox One (including Xbox One X).

Do you want to be a video game expert and know all the tricks, guides and reviews for your video games ? Holygamerz.com is a group of video game fanatics who want to inform you about the best tricks, guides and tips. We offer you the best information to be a reference in gaming, so here you can find guides, tricks, secrets and tips so you can enjoy your games to the fullest. Are you ready to get all the achievements of that game that you resist so much? Enter now and enjoy your favorite video game to the fullest!
Madden NFL 17 review ❯

News Hideo Kojima talks about the "Like" system of Death Stranding