Ubisoft announces, in a press release, the contents of the Season Pass dedicated to the highly anticipated For Honor, coming to PC, PS4 and Xbox One.

UBISOFT ANNOUNCES THE SEASON PASS OF FOR HONOR

MILAN, February 2, 2017 - Ubisoft® announces that the For HonorTM Season Pass will include six new heroes available seven days earlier than other players, new gear and 30 days of Champion Status, which will give players more experience points and loot. New add-on content will be available to all players for free after the game's release including new maps, modes and gear.

The For Honor Season Pass is included in the Gold Edition or can be purchased separately. Season Pass content includes:

All Season Pass content, with the exception of the six new heroes and their elite outfits, will be available simultaneously with the game's release on February 14, 2017. The new heroes will be available in pairs at the start of the new War season. of the Factions, a persistent and cross-platform conflict between knights, Vikings and samurai that will change the world of For Honor. After this period of early access, the heroes can be unlocked through Steel, the in-game currency of For Honor that can be earned through completed challenges and matches. 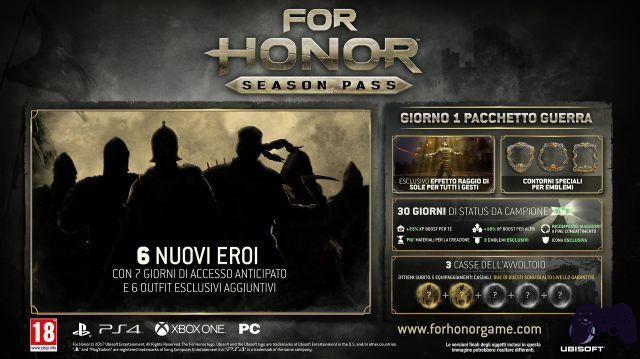 Players who want to hone their skills before the official release of For Honor can participate in the Open Beta taking place February 9-12, 2017. This Beta version will include the new Elimination mode, a best-of-five, four-on-four round. without respawn. The Elimination Mode joins the other modes that will be available in the Open Beta, including Domination, Brawl and Duel, and nine playable heroes. Upon release, For Honor will offer a choice of twelve playable heroes and five different multiplayer modes.


Developed by Ubisoft Montreal in collaboration with other Ubisoft studios *, For Honor offers a truly compelling campaign, as well as an exciting multiplayer experience. Players will be able to take on the role of the warriors of three great factions: the daring knights, the brutal Vikings and the mysterious samurai, fighting to the death in a series of intense and realistic battlefields. Art of War, For Honor's innovative combat system, grants total control over their warriors, allowing players to use each hero's skills and fighting styles to eliminate any enemies that stand in their way. For Honor will be available on February 14, 2017.


Source
Do you want to be a video game expert and know all the tricks, guides and reviews for your video games ? Holygamerz.com is a group of video game fanatics who want to inform you about the best tricks, guides and tips. We offer you the best information to be a reference in gaming, so here you can find guides, tricks, secrets and tips so you can enjoy your games to the fullest. Are you ready to get all the achievements of that game that you resist so much? Enter now and enjoy your favorite video game to the fullest!
Special PS5 vs Xbox Series X: what does the design of a console communicate? ❯

News Cyberdimension Neptunia: will arrive in the west for PS4 and PC this winter

News + Guardians, unite: there is some charity to do with Destiny 2