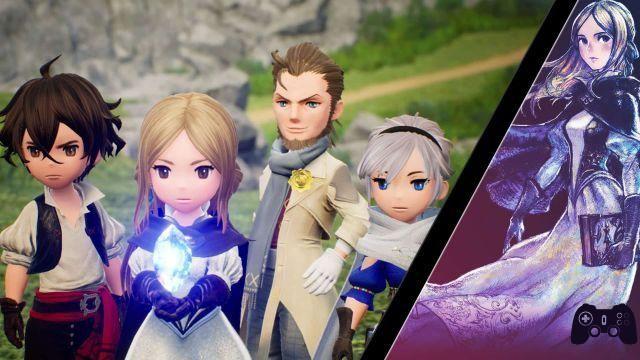 Bravely Default II is out soon and it's time to review everything that has been shown in the trailers. While there isn't too much to say, these explanations will make you understand what you can expect from this title out on February 26th for Nintendo Switch.

If you want to know the most important information about Bravely Default II I recommend you read ours summary article.

We also refer you to our article with all the solutions on the game if you are already trying it right now.

Trailer with the setting

This trailer shows some cities of the game in all its glory and very brief fragments of combat. Fortunately for us, the style of nations is maintained that is so dear to Bravely fans.

The story starts from the shipwreck of the protagonist Seth, a fairly stereotyped but functional premise. For longtime fans this is nothing new, as each chapter of the series begins rather unfortunate.

Unfortunately, the West has had fewer trailers than the Rising Sun, such as those shown in the sections below. You don't need to understand Japanese to see that there are interesting details about some of the characters in the game and also about the classes.

There are also some in the trailers class animations used in battle. Many of them are really not bad and seem to be far superior to those of Bravely Default and Bravely Second.

The second area revealed is Wiswald, the magical kingdom. In this region there are many acquaintances of Elvis, including his former teacher, Emma Odilia, one of the founders of Wiswald. It is also revealed to us that Emma had traveled with Gloria's father across the continent.

The other characters shown are Roddy and Lily Grenadine, spouses and holders of two asterisks. The first is the director of the "Magic Research Institute", as well as a former colleague of Elvis and also a pupil of Emma. Ever since he lost his daughter in an accident, he has been searching for her day and night (we don't know which one).

The wife, on the other hand, has isolated herself in a forest where she is convinced that she is still in contact with her dead daughter.

The other character revealed is Galahad Kelly, holder of the asterisk of the Shield Master and a native of Rimedahl, although emigrated to Wiswald. He feels responsible for the death of Roddy and Lily's daughter.

The revealed classes are as follows:

The Shield Master is a brand new class, which falls within the group of defensive / tank classes. For more details you can consult our news that talks about classes revealed.

Rimedahl is a kingdom covered in snow and ice, which, according to an ancient legend, was saved by a dragon 1000 years ago. After this event, the followers of Orthodoxy began to worship the patron dragon.

This trailer shows not only the winter region of Rimedahl but also some characters ie Martha, Gwylim, Gladys, Helio, Domenic and Glenn. Of course, this trailer also shows pieces of gameplay where we can see other classes in all their glory. Unfortunately in the West there is no shadow of an equivalent trailer ...

The classes shown are:

All the classes listed above are already present in the other titles, except Oracle, the only unedited one. Unfortunately, the trailer focuses very little on each class and it is not possible to have other information at the moment.

For more details on Holograd and the places revealed so far in the trailers you can check out the our article.

The Asano team really cares about what the players say and in this video Masashi Takahashi, producer of the title, explains what they have improved thanks to our feedback from the first demo.

With about 1 million demos downloaded, the staff was able to receive 22000 responses to the questionnaire, of which about 7000 from Europe alone! The data obtained was useful to get an idea of ​​what was good and what was not, and the comments left by users were decisive.

Among the criticisms we can note the difficulty, as the first demo was actually too busy to be a normal trial version. Not that it was difficult, but we usually expect a very low level of challenge from a demo. For this reason, the possibility to choose between 3 levels in the second demo, as well as the latest release.

The other criticisms relate to the gaming experience and contributed to one increased focus on improving the graphical interface (UI).

The most interesting addition was the bar indicating the order of action of characters and enemies. A system that roughly follows the ATB of the Final Fantasy classes, but with some differences visible in the trailer itself.

The rest of the improvements are of little consequence to those who buy the full game. Eventually the second demo has already come out and the full game will already contain these important changes.

Trailer on Brave and Default

For the uninitiated, the title is based on the system of Brave and Default, two fundamental mechanics of the series.

The story of the trailer is that you should never abuse the Brave too much, as excessive use will make you totally vulnerable.

Square Enix recently released 2 trailer on Bravely Default II, one on the story and the other on the combat system. Thankfully, these trailers add nothing new to the ones described above. In fact, they are the usual pre-launch advertisement to remind people to buy the game.

A very short trailer describing the story of Bravely Default II. I doubt that even in Europe we will have such trailers on television…

And here is the other "commercial" trailer that quickly describes the combat system. At the moment the West has not yet had promotional trailers of this kind.

After the Nintendo Direct on February 17th, this final pre-release trailer has been released which summarizes what has been shown so far in the West. We can see some dialogue from the game with characters also shown in the Japanese trailers.

Unfortunately the classes are not analyzed but Adamas' henchmen are seen in action.

Do you want to be a video game expert and know all the tricks, guides and reviews for your video games ? Holygamerz.com is a group of video game fanatics who want to inform you about the best tricks, guides and tips. We offer you the best information to be a reference in gaming, so here you can find guides, tricks, secrets and tips so you can enjoy your games to the fullest. Are you ready to get all the achievements of that game that you resist so much? Enter now and enjoy your favorite video game to the fullest!
News The Outer Worlds: Coming in October ❯

News Lucca Comics will host the actors of Netflix series