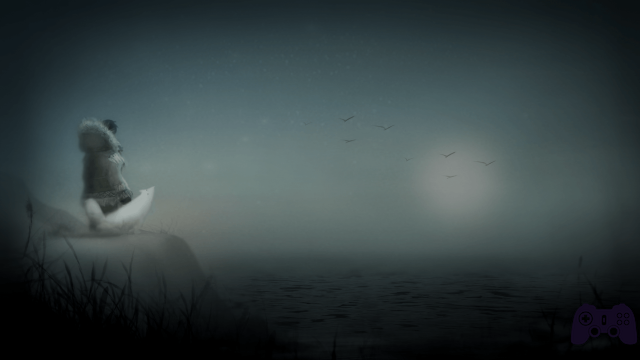 Among the titles released this year, many have given emotions thanks to a well-written and often touching plot: we started 2014 with The Banner Saga, which narrated an incredible Father / Daughter relationship, in June we were moved with Valiant Hearts: The Great War, and last November 18th, another game tries to join this large group.
Never Alone- Kisima Ingitchuna, is offered to the public with a base price of 14,99 €, is available on PlayStation 4, Xbox One e PC and makes the plot its main factor. Will he be able to convince us?

The Arctic Fox and the Little Girl

The village of Nuna is suddenly enveloped in a powerful snowstorm: the poor Eskimos are forced to take shelter and risk dying of hunger. The young Nuna, whose only skill seems to be hunting, decides to go on a journey to find out what causes the strong wind and the incessant storm.
She will meet an Arctic Fox able to communicate with the spirits that inhabit the Sila (what separates the Earth from the Moon) who will accompany her throughout the adventure, until the epilogue and the discovery of the mystery.
During the journey, this unusual couple will meet little owls who will unlock mini-documentaries that integrate perfectly with the story of Upper One Games, concerning the Eskimo culture and the traditions that still live in those cold places today.

The player will discover more of the Eskimo culture

By alternating the gameplay phases to the aforementioned videos, the player will be able to find out more about the legends and why Never Alone is a title that contains, in the three hours of gameplay necessary to conclude it, much of the Eskimo culture.
The plot of Never Alone is very simple, at times even banal, but it still manages to maintain a constant rhythm for the duration of the journey of Nuna and the fox.
Unfortunately, being the title very story driven or very focused on the plot, and the owls above very easy to find, the replayability of Never Alone is almost nothing, and once the plot is completed you will replay it only for personal pleasure.

Never Alone is a 2D platformer, and it is possible to play the whole adventure of Nuna with a friend, unfortunately only offline.
If you are a solitary player, to change characters just press triangle, otherwise you will have control of one of Nuna and the other of the Fox.
Both characters can jump with X, crouch to resist gusts of wind with a circle, while Nuna can use Bolas to hit obstacles or enemies with the right analog. The fox, on the other hand, in addition to being able to jump on the walls, will be able to control the spirits of the Sila thanks to the square.

Never Alone is suitable for all types of players

With the help of otherworldly beings, the fox will be able to reach places inaccessible to Nuna, solve puzzles and create platforms in the huge expanses of icy water.
Never Alone is very easy, and for this reason it is suitable for all types of players, in order to allow you to share the experience even with people less experienced in the genre.
The "trial and error" mechanics make the cooperative experience even more enjoyable: in Never Alone you die but it never gets frustrating, and you could even end up making fun of your fellow adventurer who just threw himself into a ditch for a badly calculated jump.
Unfortunately alone the title of Upper One Games slightly loses appeal due to a companion AI not always responsive, for which the team is currently preparing a patch.

The colors of the wind

Technically Never Alone does not shine for polygonal models, but concentrates everything on atmospheres and landscapes: although everything looks very similar to Monochroma As for the color scale, halfway through the adventure you will be inundated by the Northern Lights, and a superb play of light for an independent team.

Unfortunately not memorable soundtrack but that helps the aforementioned atmospheres, while the Eskimo tribal songs that can be heard for most of the time are of value.
The game is fully subtitled in Spanish, including video documentaries, making it truly accessible to an audience of any genre.

Verdict 7.5 / 10 What does the white fox say? Comment Never Alone is a very light and simple 2D platformer, which tries to kidnap the player with unique atmospheres and a plot that might seem trivial, but hides a strong message. Upper One Games has managed to merge documentary and game, making an excursus on the Eskimo culture as the story of the title continues. We advise you to play it in the company of a friend, boyfriend or girlfriend, in short, to enjoy the adventures of Nuna and the fox in a cooperative. Unfortunately, being a title that relies heavily on history, you will hardly re-play Never alone if not for pure personal pleasure or to show it to a friend, the title is still a pleasant entertainment for cold and rainy afternoons. Pros and cons ✓ Magical atmospheres
✓ Good integration between documentary and game
✓ Satisfying in two players ... x ... a little less alone
x Absence of the online cooperative
x Low replay value
x Maybe too short

Do you want to be a video game expert and know all the tricks, guides and reviews for your video games ? Holygamerz.com is a group of video game fanatics who want to inform you about the best tricks, guides and tips. We offer you the best information to be a reference in gaming, so here you can find guides, tricks, secrets and tips so you can enjoy your games to the fullest. Are you ready to get all the achievements of that game that you resist so much? Enter now and enjoy your favorite video game to the fullest!
FAST Racing Neo review ❯

Pokémon Sword and Shield review: a music that surrounds England

Persona 5 Royal Review - Politics, friendship and that future to hope for