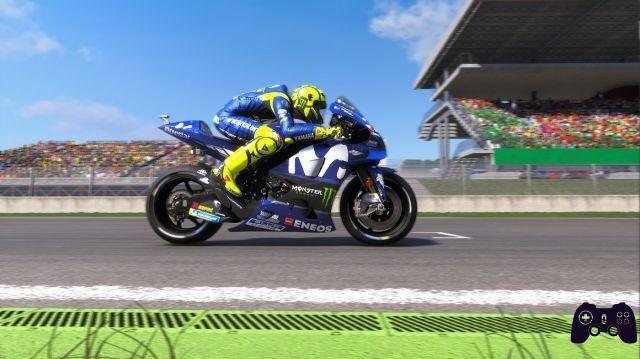 Milestone announces through a press release that some interesting news regarding the multiplayer mode of MotoGP 19 have been shown to the public, all the details can be found in the full press release below.

Revealed the news of the MotoGP ™ 19 Multiplayer!

Milan, 09 Maggio 2019. Milestone today presented all the news of the MotoGP ™ 19 Multiplayer mode, which is enriched with important innovations both from a technical and gameplay point of view. The developers have in fact decided to devote great attention to the implementation of technologies that could significantly improve online gameplay, as well as enrich it with new features that allow players to live a more realistic and authentic gaming experience.

MotoGP ™ 19 Sara available from June 6 on PlayStation®4, Xbox One, Windows PC® / STEAM and TIMGAMES. The version for Nintendo Switch ™ instead it will be available starting from 27 June *.

The first step to improve the quality of the MotoGP ™ 19 Multiplayer experience was to use, for the first time in the history of Milestone games, Dedicated Servers for the management of online games. As in any Multiplayer game, in fact, the network infrastructure is fundamental to guarantee the reliability and stability that players need to compete better. The adoption of Dedicated Servers makes it possible to have low latency, for more fluid races and without those lag that could compromise performance during a race.

Michele Caletti, Milestone Producer, commented “when it comes to online multiplayer, racing games are among the most demanding in terms of bandwidth and ping time. In fact, they have to reproduce in a network environment, the frenetic action of racing cars speeding at more than 300 Km / h, where the precision in collisions and in the position of the opponents is fundamental. Thanks to the GameLift Dedicated Servers, ping time fluctuations and problems arising from the bandwidth differences of the game participants are now only a distant memory. All players can finally compete on equal terms ".

"Amazon helps developers think big and make even bigger games, we are really happy that Milestone has decided to rely on GameLift for its MotoGP ™ 19" comment by Jen MacLean, Worldwide Head of Business Development at Amazon Game Tech. "GameLift helps developers get a stable, reliable and low latency multiplayer."

In MotoGP ™ 19 you can scroll through the list of Public Lobby to find the best match for your needs or, thanks to the Private Lobby, create a fully customizable Grand Prix to compete only with friends.

Together with the Private Lobby, Milestone introduced, for the first time in the series, the mode Race Director, which will allow you to manage every aspect of competitions between friends. The Race Director will in fact be able to decide at will which competition sessions will be included in the challenge, as well as deciding in which weather conditions the participants will have to face.


During the race he will have the faculty to assign penalties in the event of incorrect behavior on the track, just as happens during a real MotoGP Grand Prix. Thanks to the role of TV Director, he will also have complete management of the game cameras, to always be in the action and manage the management of his own livestreams in complete autonomy.

The innovations introduced this year for the Multiplayer mode of MotoGP ™ 19, loudly requested by the gaming enthusiast community, are further confirmation of the importance that the community feedback has had in the game development process.

Do you want to be a video game expert and know all the tricks, guides and reviews for your video games ? Holygamerz.com is a group of video game fanatics who want to inform you about the best tricks, guides and tips. We offer you the best information to be a reference in gaming, so here you can find guides, tricks, secrets and tips so you can enjoy your games to the fullest. Are you ready to get all the achievements of that game that you resist so much? Enter now and enjoy your favorite video game to the fullest!
News New announcement coming from the creators of the SteamWorld series ❯

News + Capsule Monsters: the first step in the Pokémon world

News + Super Mario 3D World + Bowser's Fury: how not to age a series

Add a comment from MotoGP News 19, new details on multiplayer