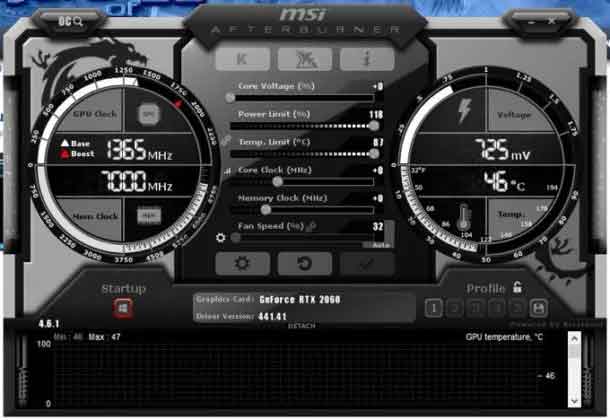 Here is a list with the best utilities to modify CPU, video card and RAM, speed up your PC, optimize and improve performance. Computer components like CPU, GPU, and RAM all have a standard performance configuration. However, manufacturers are actually quite conservative when it comes to deciding how fast their components are to run.


They promote stability across the board of hardware components, meaning particularly capable samples will never run at their full speed. With a little tweaking (overclocking) you can get the maximum possible performance out of these components.

But how? Many of these changes have to be made in the BIOS, the main firmware of the computer motherboard? No, because while modern BIOS interfaces are much more user-friendly, they can still be intimidating. The following applications are 5 of the best CPU overclocking utilities.

MSI is one of the leading hardware manufacturers in the world. They make almost every computer component you can think of, as well as entire systems. MSI graphics cards are highly respected too, but even if you don't own a card made by MSI, you can still take a serious look at MSI Afterburner, their internal GPU overclocking optimization utility.


Despite being an MSI-branded product, it is open to anyone with a compatible GPU. Afterburner is widely considered to be the best GPU overclocking utility for Windows. There's even an Android app that lets you control your GPU from your phone!

Afterburner is very easy to use and supports the latest technology, including the modern automatic overclocking features found in some cards. The application itself offers a choice of different skins to suit almost any custom gaming PC setup.

You can tweak the CPU, GPU, RAM, and just about any aspect of your card, from voltages to clock speeds. Afterburner also has robust on-screen display capabilities, so you can monitor your tab during gameplay as you try out the new settings. You can also create detailed custom fan profiles, so you have the perfect balance of noise, heat and performance. Many have tried, but right now Afterburner is still the king of the hill when it comes to GPU overclocking.

These two free CPU and GPU optimization utilities won't allow you to actually modify any of your components, but they're still a key part of any system optimizer's arsenal.

Each respective application provides detailed information about the system, much of which you need to know before you can strategize how to overclock or otherwise modify those components.

In the case of CPU-Z (by CPUID) you will get accurate information about the CPU model you have, its actual voltage and clock speed. On our test system here, for example, Windows reports that the CPU runs at 3,5Ghz, but CPU-Z correctly shows that it actually runs at nearly 4,3Ghz, which is what we overclocked it to.

You can also get detailed information about the motherboard and what firmware it is running on. CPU-Z is also a perfect utility for getting information about memory settings, so you can check if the BIOS changes have actually taken effect.

CPU-Z (by TechPowerup!) Does pretty much the same thing for your GPU. You can get an accurate and detailed reading of all GPU specifications, along with real-time output from all sensors on the board. It's a great diagnostic tool, and like CPU-Z, a good first stop before actually touching anything on the GPU in terms of settings.

AMD is at the top of the charts again, with Intel licking its wounds following the release of the latest Ryzen CPUs. Ultimately AMD is rivaling the instructions for improving Intel CPU performance by providing more CPU cores at very reasonable prices.

That doesn't mean you have to be happy with the performance you get from your Ryzen chip. If you've been lucky with the CPU and have the thermal headroom to do so, you can make some serious gains from AMD's latest energy-efficient 7nm manufacturing process.

It turns out that, unsurprisingly, AMD itself knows more about getting performance out of their hardware than anyone else. The AMD Ryzen Master Optimizer is the easiest way to get your processor running at its peak. Unlike Intel, AMD does not block the clock multiplier on Ryzen CPUs. This means that you can freely set the clock speed without affecting anything else.


AMD offers an incredible amount of customization here. You can have four different performance presets for your CPU, depending on what you are doing. So you might have a high heat and noise preset that will chew video encodings quickly, and a silent mode that won't blow your ears while watching a movie. It's arguably the most civilized way to overclock the latest AMD technology.

This utility from Intel is their official overclocking utility that allows you to change CPU, Graphics Card and RAM speeds from within Windows. It's actually a bit odd given how anti-overclock the company was until recently.

Unlike AMD, Intel only unlocks the clock multiplier on enthusiast chips. Usually with model numbers ending in "K". Which means not many people will find this utility useful from an overclocking point of view. However, you can still adjust other aspects of your Intel CPU, such as the voltage. Undervolting a laptop's CPU, for example, can improve battery life without necessarily affecting stability.

By the way, the optimizer has built-in stress tests and benchmarks, so you can make sure the changes you make are stable. Making changes directly to the BIOS is still the preferred way of easy CPU and GPU overclocking for professionals, but utilities like this make it much easier to use to get your money's worth from that expensive silicon.

The latest tuning utility on our list is designed specifically to help tune DRAM modules on Ryzen systems, but is actually useful for any modern computer that uses DRAM. Which are basically all of them.

Adjusting your computer's RAM performance metrics is quite complicated, as there are so many factors to adjust. The DRAM Calculator works out the optimal mix of settings for the RAM modules, so that they perform according to their potential.

If you're using a Ryzen system, the software will tell you exactly which settings to use. However, it turns out that the suggested settings work quite well for Intel systems as well. Simply use information that isn't AMD specific to tune your DRAM and you'll get most of the benefits as well.

Ryzen DRAM Calculator really takes the pain and complexity out of RAM optimization. You don't need to know what “RAS” or “CAS” is, just enter the suggested numbers and reap the rewards.

Incognito browsing, how it is activated ❯