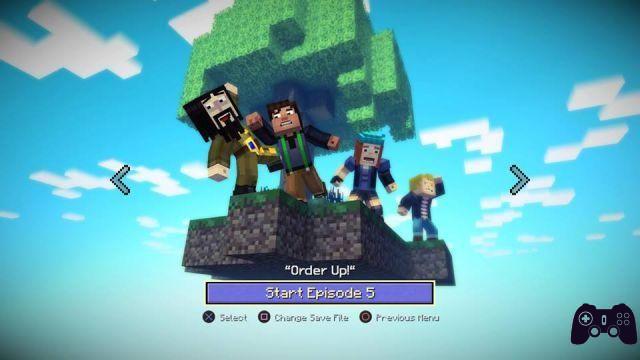 It was the last days of December when, after enjoying the fourth episode of Minecraft: Story Mode, we poured into the review the doubts about a fifth chapter, useless for the purposes of a closed plot. Instead in recent days, in addition to confirming the third season of The Walking Dead by the end of the year, and giving further details on the title dedicated to Batman, the boys of Telltale have announced three more episodes (besides this one) dedicated to Jesse and his companions, excluded from the previous season pass and which will be distributed in the coming months. It will be successful Order Up! to put enough meat on the fire with a new plot, or will it be yet another spark of the collaboration between Mojang and Telltale?

If you are reading our reviews of Minecraft: Story Mode episodically, you know that where we try to minimize the spoilers of the analyzed chapter, most of the time we find ourselves revealing and the contents of the previous episodes. In this case we will focus especially on the ending of A Block and a Hard Place, and broadly on the plot of Order Up!

We'd left Jesse and mates triumphant on the Witherstorm, mourning their fallen and being elected New Order of the Stone, in what was effectively a good ending to a fluctuating first season. The fourth episode left us only with a sentence that heralded new adventures for Jesse and companions in the last chapter of the series. Order Up! opens some time later, Jesse and company are heroes in all respects and have infiltrated a temple under the advice of Ivor, who now redeemed, acts as an advisor to the group. After a daring escape, which the team has now accustomed us to throughout 2015, Jesse manages to obtain the artifact and once activated he creates a door to another dimension. In this world, building is forbidden and everything depends on the founder and on Eversource, an inexhaustible source of materials that are the protagonists of ancient legends. The whole is threatened by Lukas' ex-comrades, who consider the New Order of the Stone a bunch of treasure-grabbing bullies.

Although it proposes a new plot (complete with a cliff hanger ready to hook up to the next three chapters) it is difficult for us to conceive Order Up! like a season finale. The events of Sky City begin and end within an hour and, being completely detached from the fight at Witherstorm, they appear more like a new beginning than a worthy ending. Given the addition of three new episodes during 2016 not included in the Season Pass, it would have been more appropriate to transform Order Up! in the first episode of the second series dedicated to the Mojang brand.

On the gameplay front there are no news: even Order Up! almost all of the game is based on Quick Time Events, and on small puzzles using levers and the now practically absent crafting table. The whole story is once again a succession of small areas in which to move and multiple choice dialogues that will affect only a certain crossroads of the episode, which will end in the same scene making Jesse's actions practically indifferent.
Even graphically, the title remains on the same levels as the previous four episodes, with an average performance and a well-acted dubbing, still only in English. On the subtitle side we find the only technical flaw of Order Up! very often, during the episode, we will find ourselves hearing fragments of dialogue not shown in the texts on the screen, or changed slightly compared to what was said by the voice actors. A problem that apparently seems to be of little importance, but that in a graphic adventure full of dialogues could give problems to those who do not chew the Anglo-Saxon language. 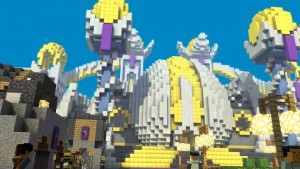 Verdict 6/10 Unplug him! Comment I will not lie to you: the announcement of three more episodes for Minecraft: story Mode caught me off guard, destroying all the reasoning I had made about a possible final episode. Why Order Up! it is not the worthy conclusion of a Telltale series based on the Mojang brand (unlike the fourth episode) but in effect the beginning of a second season. A judgment that is inevitably damaged by this change of direction by Telltale and that transforms an average experience into something that it fails to exalt as it would like to do. Pros and cons ✓ Self-Concluding Episode ... x ... but with a cliff-hanger for the next adventures
x Problems between audio and subtitles

Do you want to be a video game expert and know all the tricks, guides and reviews for your video games ? Holygamerz.com is a group of video game fanatics who want to inform you about the best tricks, guides and tips. We offer you the best information to be a reference in gaming, so here you can find guides, tricks, secrets and tips so you can enjoy your games to the fullest. Are you ready to get all the achievements of that game that you resist so much? Enter now and enjoy your favorite video game to the fullest!
Snoopy's The Great Adventure Review ❯

No More Heroes review: the beauty of boredom