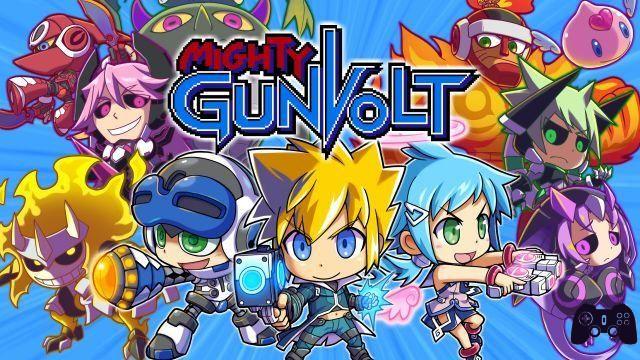 Arriving on the Nintendo 3DS eShop, after the announcement in Nintendo Direct on April 2, is not alone Azure Striker Gunvolt, but we also find Mighty Gunvolt, 8-bit demake of the latest effort Inti Creates, which lands in the store Nintendo in a completely free version if purchased coupled with Azure Strike Gunvolt until 3 July.

This scaled-down version of Azure Strike Gunvolt was born as a DLC of the original, to then acquire more substance and become a stand-alone title capable of standing on its legs. In reality Mighty Gunvolt is a hit and run experience that mimics its older brother, mainly inspired by a great classic of the past: Mega Man.
In a sort of parallel universe the group Sumeragi began his experiments on humans with the intent of finding the Muse Idol which will allow him to conquer the world. The expansionist aims of the evil Sumeragi have led her to kidnap numerous students, putting social and, above all, love relationships in crisis. It will be up to Gunvolt, with the help of Tar, the robot of Mighty No. 9 e Ekoro, an angel from Gal ☆ Gun restore world peace. As you may have guessed, we are facing a cross-over of some of the titles developed by Inti Creates that try to coexist in Mighty Gunvolt, with excellent results in terms of gameplay.

The return of the Blue Bomber

As mentioned the play structure is inspired by that of Mega Man of the NES era: a naked and raw 2D platformer in which we will have to defeat the army of the Sumeragi Group screen after screen that will lead us to face the boss on duty (mainly from the world of Azure Strike Gunvolt).
Despite everything appearing quite simplistic, both in the platform dynamics and in the difficulty (far from the sometimes exhausting traits of Mega Man), Inti Creates has managed to deeply diversify the gameplay based on the chosen character at the beginning of the game and that will accompany us along 5 stages. If each of the protagonists shares basic moves, such as jumping or shooting, there will be quite clear differences between the 3 protagonists. Gunvolt will be able to take advantage of an electric attack, which can be fan-controlled in height and attack enemies while remaining at a safe distance as well as using a double jump, so as to overcome the highest obstacles without problems. Ekoro, on the other hand, can rely on a charged shot capable of hooking the enemies that will line up alongside him, increasing the firepower. Being an angel he is able to float the level far and wide. Closes the triptych Beck, which in Mighty Gunvolt makes his official debut (the release date of Mighty No. 9 is still a generic April 2015) and which, given the resemblance to Capcom's Blue Bomber, is what he remembers the most. the gameplay. The actions that distinguish Beck are a loaded shot and a slide, which allows him to access some areas closed to the other protagonists.

Given the relative ease with which it is possible to get to the end of the game, there is a multiplier that keeps track of our kills by increasing the final score. It will be enough to receive a few too many hits to restore the counter to its basic values, affecting the final result. This should entice the player to try to improve match after match, prompting him to break new records. Each run, depending on the player's skills, will take you away from 30 to 40 minutes, the time necessary to face the 5 stages and the end-level bosses in succession. The version that has come down to us is 2.0 directly which introduces, in addition to some slight tweaks to the gameplay (shorter times for the charged attack by Gunvolt or a greater number of bullets for Ekoro), also the possibility of buying a DLC containing 4 new stages (2 from Mighty No. 9, 1 from Azure Strike Gunvolt and the latest from Gal ☆ Gun) with their final enemies.

I remembered you less pixelated

Also in the aesthetics the reference to Mega Man is more than obvious. The retelling of the 8-bit salsa levels is enjoyable with well-detailed and animated sprites. This stylistic choice has also led to the use of a 4: 3 video ratio, forcing the use of the classic black bands on the Nintendo 3DS upper screen. There is an option to fit the video image by pressing the L + R keys simultaneously. This operation, however, only stretches the game view by reducing the width of the bands and not to change the aspect ratio. On the other hand, the stereoscopic 3D effect is absent, which although not essential, sorry, given the excellent experiments performed by Sega with his series 3D Classic (it is a prime example 3D Out Run).
The sound has also undergone the same treatment in this 8-bit re-imagining that sees the main themes of the original game revised in a chiptunes key.

Verdict 8/10 Ah but isn't Mega Man the blue one? Comment Mighty Gunvolt is a nice experiment that comes to us for free until July 3rd if purchased together with Azure Strike Gunvolt. A simple game that will take you a few hours away but capable of entertaining thanks to its old-school style. As for the major title, here too we are faced with a tribute to the original Mega Man series, which will especially make the lovers of the Blue Bomber saga happy. There is also a DLC (at a price of € 2.49) that adds 4 new stages to the title, and given the negligible cost and the free starting base it is an investment to ponder without too many thoughts. Pros and cons ✓ The style of Mega Man lives on in this demake
✓ Simple but refined gameplay
✓ The DLC extends the gaming experience x The basic version does not last long

Do you want to be a video game expert and know all the tricks, guides and reviews for your video games ? Holygamerz.com is a group of video game fanatics who want to inform you about the best tricks, guides and tips. We offer you the best information to be a reference in gaming, so here you can find guides, tricks, secrets and tips so you can enjoy your games to the fullest. Are you ready to get all the achievements of that game that you resist so much? Enter now and enjoy your favorite video game to the fullest!
Disney Infinity 3.0 Review - Inside Out Play Set ❯

Ghost of Tsushima | Review, the way of the Ghost