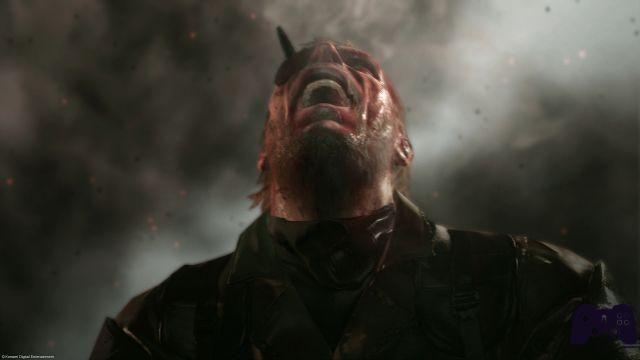 At this point, it is impossible not to label Metal Gear Solid V as one of those titles condemned to be talked about: the announcement in the name of the fictional Moby Dick Studios di Joakim Mogren (later revealed to be Hideo Kojima himself in disguise), the controversy over the longevity of the "first act" Ground Zeroes and the divorce between Konami and Kojima have in turn held court for nearly three years. Yet we are almost sure that The Phantom Pain will continue to be talked about in the time to come for a reason if we want much more banal: we are simply faced with a Metal Gear (the last one?) Damn controversial, how much and perhaps even more than that Sons of Liberty released in the 2002.

From the man who sold the world

The main theme is that of revenge, but there are references to the themes dealt with in the other chapters

The events start again from where they left off after the tasting given to us by Ground Zeroes: following the attack by the mysterious XOF that destroyed the Mother Base, Big Boss goes into a coma, awakening only nine years later. In the role of Venom snake so his goal will be to put back on his feet a company of "war hounds" (this time no longer Militaires Sans Frontieres, but Diamond Dogs) and together with the old gang to retaliate on Cypher and on the mysterious Skull Face, respectively principal and perpetrator of the attack. Whether we are talking about Snake, Kaz Miller or even the antagonists, the main theme of this fifth chapter is that of revenge, in opposition to Peace Walker's peace (to which a subplot linked to Paz is dedicated in this chapter) but there is no shortage of hints more or less present to the other "classic" themes of the narrative register of the series, such as that of "memes", information and elements handed down to future generations without conveying them through genes. As there is no shortage of moments dedicated to the "phantom pain" mentioned in the title, it concerns the limbs lost by Venom Snake and Kaz or the comrades in arms who fell during the fight against Cypher and the XOF. All this is divided into about 50 main missions, which net of side-ops (over a hundred secondary missions, unfortunately most of them not repeatable) correspond roughly to as many hours of play, obviously influenced by the "personal variable" of the style of the game. player who can increase or decrease the time to spend to get to the end.

It was said at the beginning of how The Phantom Pain is a chapter that will surely give a lot to discuss to fans: one of the main reasons supporting this statement concerns the narrative component of the title, which has always been one of the workhorses of the series and more generally of the Hideo Kojima products (whether the indication is present on the cover or not). From this point of view, it must be said, this fifth chapter manages to have its say also with a certain skill, giving some filmed sequences embellished by the usual direction and cinematic touch of the Japanese developer and, above all, as raw as and even more than the Ground Zeroes finale (just think about the first mission in this regard). There are also citations to other chapters of the series or to third works such as Moby Dick (recurring since the time of the announcement of the title), as well as winks to the player who break the fourth wall and clues for the more attentive left with the aim to make you guess the ending. But the main problem is that for most of the experience, the pace is a little too low, with this aspect in particular of the title able to engage only once you arrive from the parts of mission 23 (White Mamba), and take off seriously only close to the splendid final of the first chapter with mission 31. A similar speech can be made for another of the aspects that in the previous releases of Metal Gear had inflamed the players, the bosses: although there are still some really successful boss fights (in this regard it is impossible not to mention mission 31 again, capable of knocking out those on the other side of the screen with a playful and narrative one-two, although partially ruined in the last handful of seconds) the lack of charismatic antagonists is felt and certainly does not help to fill the pieces of "plot void" that characterize the first part of Chapter 1 and almost entirely Chapter 2 (we'll be back in a moment). The blame, wrongly attributed by more than one to the new open world setting chosen to package the product, is more likely to be attributed to the friction created between the parent company and Kojima, which among other things led to the removal of a key mission and to the shaky management of the second act of the title, which then leads to the final: in order to see the last sequence it is in fact necessary to play some missions unlocked after the thirty-first, which however in their majority correspond (as regards the main storyline) to old missions repurposed with some modifiers, such as increased difficulty or the obligation to complete everything without being discovered. The alternative is to tackle a series of "ennobled secondaries", which paradoxically, although not playable a second time, push forward the plot of these "deja-vu missions".

The recordings are part of the story in their own right

In short, for long stretches of the experience the story advances more thanks to the cassettes that tell what happens to the new Mother Base during the Venom Snake missions and which, for the avoidance of doubt, being given at the end of each mission and containing both related information to the title in question and in-depth information on older titles (such as Snake Eater), they are not to be counted among the collectibles but are rightfully part of the main storyline, unlike those dedicated to the music tracks scattered around the map. So much so that they manage to lay bare even some secondary characters (not so much), such as Huey Emmerich who from this fifth chapter emerges in an unprecedented light and, without saying too much, chilling.

We deliberately kept for last the aspect that will undoubtedly raise the most heated discussions: the ending. Without wishing to anticipate anything, we limit ourselves to saying that this, with the exception of the subplot linked to the canceled mission we were talking about above, closes the circle of the series in a practically surgical way, managing to connect The Phantom Pain to the chronologically subsequent chapters (we are referring above all to the two Metal Gear released on MSX and to the first Metal Gear Solid) surprisingly fitting together with details dating back to almost thirty years ago. However, it is undoubtedly a gimmick capable of displacing the player, almost a slap in the face, which can tip the scales equally to one side or the other. In this sense, the initial comparison with Metal Gear Solid 2 seemed to us the most appropriate, even if here the proportions are decidedly more macroscopic within the series. To put it briefly, once again, we will probably talk about it for a long time, but for our part, not recognizing the courage of a choice ever so on the border between genius and madness (trademark of the "Kojima touch") would have been unfair. against the risk that the developer has taken on.

1 2
Do you want to be a video game expert and know all the tricks, guides and reviews for your video games ? Holygamerz.com is a group of video game fanatics who want to inform you about the best tricks, guides and tips. We offer you the best information to be a reference in gaming, so here you can find guides, tricks, secrets and tips so you can enjoy your games to the fullest. Are you ready to get all the achievements of that game that you resist so much? Enter now and enjoy your favorite video game to the fullest!
Special Video games masters of history: the real crypt of Altaïr ❯