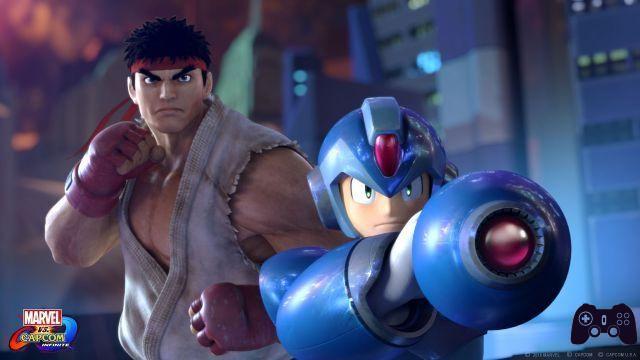 Marvel Vs. Capcom: Infinite is the perfect litmus test of Capcom's current situation, suspended between lack of courage and wanting to fix things that aren't broken at all costs.

Capcom has been like this for some years now. On the one hand, the news is hiding - outside the Monster Hunter series - and the core business of Osaka seems to have shifted to the remasters and collections of its old glories. On the other hand, when you finally try to change the cards on the table, things do not go. Street Fighter V is a great sequel to that Street Fighter IV that had relaunched two-dimensional fighting games, but was for long stretches a construction site in full swing. The weaknesses of Ultra Street Fighter II: The Final Challengers were precisely the innovations introduced for this umpteenth revision of the title.

Marvel Vs. Capcom Infinite pays the price for some unfortunate choices, which cripple the intuitions inserted on disk by the Osaka house.

MT Framework retires, replaced by U. Hazardous choice that does not pay

We usually reserve the last paragraph of our reviews for the technical / visual aspect, passing all the rest of the offer under the radar first. In this case, however, we want address the issue immediately, since this is where Capcom has committed one of the naivety more sensational behind Marvel Vs. Capcom: Infinite. If the splendid third installment of the series won and convinced also thanks to a very cartoonish trait and an extremely colorful visual rendering - in pure Marvel style, this time in Osaka we opted for a more realistic approach and closer to the character of the new engine adopted (and to the Marvel Cinematic Universe). The transition from MT Framework to Unreal Engine 4 clearly involved all aspects closest to the player's eye, but the final result inevitably results more anonymous and less suitable to realize on the screen what is a melting pot of two different cultures and philosophies. Seeing a more credible-looking Captain America interact with Arthur from Ghost 'Goblins leaves the player with an annoying feeling of detachment, which with a cut closer to the style of comics (in place of their cinematographic counterparts) would have been easily avoided.

The other big problem, illegitimate child of this choice, is linked to the narrative component of the title: yes, undoubtedly the more "filmic" approach has granted Capcom the possibility of insert cutscene and tell a more homogeneous story, which travels on a single track (while facing the events in parallel) and allows you to present the new game world - born from the intersection of scenarios from the Capcom world and landscapes made in Marvel. The problem? Marvel Vs. Capcom 3, while "cheating" thanks to its comic book approach, it simply offered more, given that despite the less cinematic narrative there was an ad-hoc ending for each character on the roster, full of references to the worlds involved and cameos.

Yep, the roster, or the elephant in the room built by crashing (for example) Asgard with Abel City - to create XGard. Without wishing at all costs to call into question the historical defections recorded this year, with Wolverine missing the appointment for the first time in the history of the franchise, it just turns out less nourished of the previous chapter, especially if you then take the Ultimate version of the third chapter as a yardstick.

At this point it would seem that Capcom hasn't got one right. And instead, in a grotesque deja-vu already experienced with Street Fighter V, pad in hand the house in Osaka has taken us, and also great. Marvel Vs. Capcom: Infinite upsets - even quite deeply - the classic mechanics of the series, abandoning the classic three-on-three approach. This time, in fact, we play two against two, and both the “incoming” moves when changing the wrestler and the possibility of recalling the partner as support have been eliminated. The exchange works as a kind of cancel, and if it is activated during the execution of a combo, it allows both characters to remain on screen until the end of this.

A tremendously courageous revolution, but one that pays off for the experience: Marvel Vs. Capcom Infinite is the least confusing chapter of the series, and one of the most fun to play - mechanics side

As with SFV, less becomes more

As for Street Fighter V Capcom has indeed filed away the superfluous, apparently revised downward the gameplay impoverishing it but in reality giving the players a more streamlined, agile and in some ways tactical formula. It works better, in a nutshell, and the whole is tremendously less heavy. And he can allow himself to experiment by introducing the Infinity Stones - great recovery from that Marvel Super Heroes of the era of the first PlayStation - and playing with them experimenting with new ideas. In fact, each of the six gems has a different power, which is declined in two possibilities from a playful point of view: a basic skill, which slightly consumes the appropriate indicator on the screen, and another more "heavier" from the point of view of implications (the Space Gem , for example, it confines the opponent in a large area a few steps, while that of the Soul brings the partner back to life and allows you to have both fighters on the screen). A variation on the theme that adds a lot to the experience, and which is all in all well balanced: there is no Infinity Stone undeniably stronger than the others (as much as that of the Soul may seem it, on paper).

Already said of the graphic implications of the engine change, it is time to analyze the performance from a technical point of view: and on this front Marvel Vs. Capcom: Infinite performs more than admirably, offering an enviable fluidity and bringing home a good result , on this front. A pity that then, however, is satisfied with that: the scenarios, although they may hinge on the idea of ​​seeing the two worlds mix, are not particularly interactive or evocative, and indeed often and willingly work better in the loading artwork than on the screen. It is, again, the fault of the graphic mood of the product, given that from the point of view of on-screen rendering it is good and the visual detail convinces - with a few small exceptions when looking at some secondary elements.

Verdict 7.5 / 10 So much we expect the usual Super version ... Comment Marvel Vs. Capcom Infinite: a good chapter of the series, which, however, due to some too risky choices cannot aspire to occupy noble positions within the history of this crossover between Osaka and Hollywood (by now it is legitimate to speak of Hollywood, given the approach closer to the Marvel movie implications than to its comic books). The transition to 2 vs 2 instead of the classic 3 vs 3 pays a lot, but the stylistic change of course and a too limited roster clip the wings of a production that could certainly do more. Pros and cons ✓ Less chaotic and more fun than usual
✓ Balanced Roster, even with the Infinity Stones ... x ... But with too many defections
x The more "realistic" style is not very functional
Do you want to be a video game expert and know all the tricks, guides and reviews for your video games ? Holygamerz.com is a group of video game fanatics who want to inform you about the best tricks, guides and tips. We offer you the best information to be a reference in gaming, so here you can find guides, tricks, secrets and tips so you can enjoy your games to the fullest. Are you ready to get all the achievements of that game that you resist so much? Enter now and enjoy your favorite video game to the fullest!
Just Dance 2018 review ❯

Add a comment from Marvel Vs. Capcom Review: Infinite