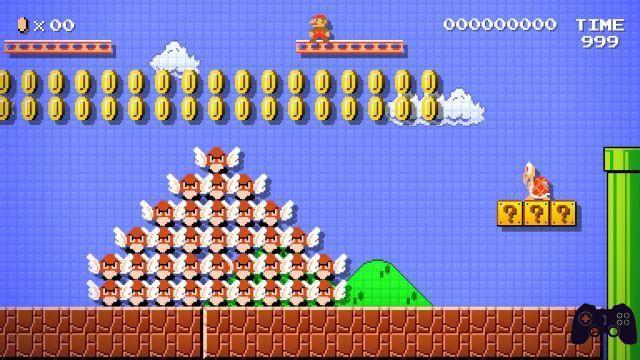 Start playing the demo Mario maker, the new experiment by the multifaceted Shigeru Miyamoto, seems like a leap into the past of about thirty years. Mario's 8-bit sprite moves around the screen, the very famous Overworld Theme plays in the background and everything looks exactly as we remember it from that distant Super Mario Bros. in 1985. In reality, you immediately realize that something looks very different from the peaceful one. level 1-1 of the original: winged Goomba pyramids, Piranha Plants climbing atop fluttering Paratroopa, overhangs interspersed with a few platforms. The difficulty level seems to have increased exponentially and inevitably you find yourself losing a life just before the final flag.
And it is precisely here that everything changes once again: the 8-bit tune fades into a rearranged version, a bit electronic and a bit chill-out. Poor Mario, who we just made a bad end of, reappears safe and sound on screen and remains in a fixed position, while we can slide the hellish level left and right, with the enemies paused. And you get to the heart of Mario Maker, whose subtitle reads precisely Create your own custom Mario courses, “Create Your Own Mario Levels”.

MAKE YOURSELF A MARIO

Mario Maker is based precisely on the concept of creating your own Super Mario Bros. levels completely from scratch. This thing may seem complicated to those who are not familiar with programming and code, but in reality the modus operandi is made accessible to anyone. The operation of the editor, central to the title, is immediate: the game area is slightly reduced to make room for a set of icons representing the most emblematic enemies of the historic game, as well as different sets of "bricks", platforms and quant 'other; the famous “?” blocks, containing a coin or the classic Superfungo (which in this episode also appears in an unprecedented “elongated” version, cannot be missing). From here the action takes place on the Wii U Gamepad: tapping the desired icon selects the content to add, which can be inserted into the game area with a further tap and then dragged to the desired position. In case of wrong entries, simply highlight the "eraser" tool and touch the element to be removed, to be able to replace it easily. When we are satisfied, we can touch the "play" button again, to return to the action and test the various parts of our level. Is that platform too high? Just re-enter the editor and lower it a couple of spaces. Does that stretch have far too many enemies? A super mushroom placed a few boxes before will make it more livable. After about ten minutes you already feel like a novice level designer of one of our favorite series.

At the end of the level, it is possible to add it to a collection to be able to replay it at any time, or to let friends try it out for external opinions. All the levels created can be played, as well as with the assets of the original, also with the new graphics of the episode for Wii U: touching the "New Super Mario Bros. U" logo from the editor, the 8-bit sprites and backgrounds, as well as the musical theme and sound effects, will instantly transform into those of the aforementioned title, while maintaining the physics of the original 80s. This choice makes the game enjoyable both for nostalgics of the first plumber's title and for new fans, who may have known the series with the last episodes in 2.5d. There are also the typical little touches of Nintendo class. Such as the background music that is enriched with new tools every time you place an element on the game area, or the nice quotes to the historian Mario Paint, of which this Mario Maker is certainly a spiritual heir.

The version we tested is just a preview of what awaits us in Mario Maker, and the news that could be included are really many. While it has already been confirmed that there will be more graphics to switch with a simple touch, as already happens for that of New Super Mario Bros. U (and in these parts we hope to see a Super Mario World Maker as soon as possible), you can immediately imagine how well an integration with Miiverse, the social network of the Great N. The ability to share the levels just made with friends, even online, seems to be an essential feature for such a title, to demonstrate your creativity with the strangest levels or full of "combo" or even just to unleash a run-up to the creation of the most difficult level ever. But we will have to wait until the first half of 2015 to see the Mario Maker project in its entirety. In the meantime, we have already figured out one thing: if playing a Super Mario Bros. level remains one of the most fun things to do with a controller in hand, creating it from scratch is no exception.

Comment Have you ever wanted to create your own Super Mario levels? Now you can! Mario Maker promises endless possibilities to play and challenge your friends (and players from all over the world) to create the most original level! The levels still not very extensive and the poor editor depend on the development (still at the beginning) and certainly in the coming months we will be able to see a progressive enrichment and expansion of the same. Pros and cons ✓ Very easy to use editor
✓ Super Mario is always Super Mario
✓ The online component promises endless possibilities ... x ... but Nintendo has not yet ruled on how it works
x The levels that can be built are still too small
x The editor could be richer

Do you want to be a video game expert and know all the tricks, guides and reviews for your video games ? Holygamerz.com is a group of video game fanatics who want to inform you about the best tricks, guides and tips. We offer you the best information to be a reference in gaming, so here you can find guides, tricks, secrets and tips so you can enjoy your games to the fullest. Are you ready to get all the achievements of that game that you resist so much? Enter now and enjoy your favorite video game to the fullest!
Animal Crossing New Horizons Special: A jump down… the tube ❯