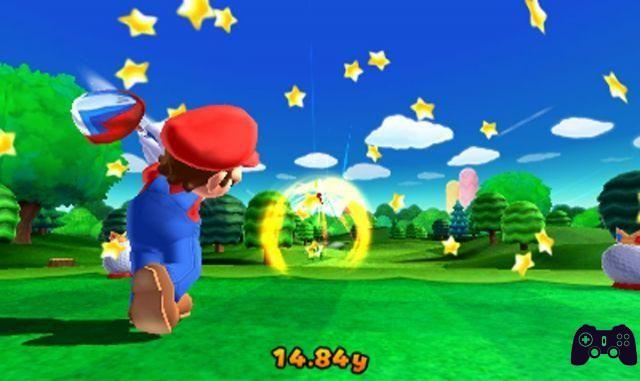 Of all the sports titles played by Mario, the two series curated by Camelot, tennis and golf, are undoubtedly the most popular and successful, so much so that they survive over the years and reappear on the new Nintendo consoles. While Mario Tennis had made a fleeting hit and run during the Wii period, returning to the series New Play Controls and with a new chapter on Nintendo 3DS, with Mario Golf we were left with a good chapter released way back in 2004 on Game Cube. Today it is preparing to return exclusively to Nintendo 3DS with a title ready to combine the classic game formula and the portable format.

Story of a bat and two balls

One of the primary aspects of Mario Golf: World Tour is its multifaceted being, the ability to sell itself to players as an arcade title capable of rivaling some of the DOC party game made in Nintendo, however offering a depth in terms of gameplay that does not look bad compared to simulations of the golf genre. It therefore becomes essential to dedicate the first moments of the game behind the tutorial and the precious golf lessons that will serve to receive a general smattering of the rules of the game, the tricks and styles necessary to master the "art of the club" . The control system returns unchanged in its simplicity, with a double approach that allows the budding player to take the first steps in a hostile territory in complete tranquility using the Automatic Swing who will take care of assisting the golfer in the shooting phase. Just press the "A" key to load the power bar after we have set the direction and amplitude of our shot. The veterans of the series, on the other hand, will be able to enjoy the Manual Swing in complete tranquility, based on a 3-stroke launch scheme, and which will require more attention from the player, who in addition to controlling its power, will be able to set two levels of Topspin (effect that makes the ball move forward once it has landed) e backspin (here the effect will be the opposite by stepping back) trying to maintain perfect timing to avoid smearing in the shot.

Balls in the hole

The player will always be assisted during each hole, as a sort of virtual caddy, and will allow himself to suggest trajectory, type of club and ideal distance on which to calibrate our shot. Obviously it is up to the player to grasp any information that Mario Golf offers us, bringing into play an avalanche of data regarding the speed and direction of the wind, the type of surface and the inclination of the courses. As if that were not enough, and those who know golf know well, it is necessary to pay close attention to the various "obstacles" scattered along the course, such as sand bunkers, artificial trees or ponds, natural enemies of the golfer, as well as rain, which it will add another level of challenge by altering the physics of the ball and, therefore, our strategy. At the beginning of Mario Golf World Tour we will be able to choose whether to face the mode Mario Golf, equivalent to the quick game, where the old game options inherited from previous chapters find space, such as mini games, challenges and variants of golf with rules based on the speed of completion or the number of holes won. The other mode, the new Club Castello is the heart of Mario Golf World Tour and will see the Mii linked to the Nintendo 3DS as the protagonist struggling with a series of tournaments designed specifically to guide the player and enter the Olympus of golfers, unlocking new content to be used in the other.


All in the field with Lotti

As in Mario Tennis Open, there will be the possibility to customize your Mii with new sets of clubs with the most varied characteristics and clothing items to show off on the playing field. Also in terms of multiplayer Mario Golf World Tour promises several interesting innovations, especially as regards the online side, achilles heel of Nintendo productions, more and more inclined to play locally in the company of friends rather than perfect strangers, but which here seems wanting to reverse the situation. The transition to the portable format only reconfirms the good programming skills of Camelot which has managed to replicate the feeling of the previous titles on Nintendo 3DS. But after all, given the excellent work done first on the Game Boy Color and, subsequently, on the Game Boy Advance we would not have expected less. A title with a fresh, colorful flavor and with that “nintendoso” touch that makes it unique and evocative in its appearance.

Comment Mario Golf: World Tour promises to be a return in style to the series that has been waiting for too long. The versatile and immediate style of the control system makes it a title suitable for everyone, while the portable nature makes it a possible travel companion to always carry with you. Some reservations about the online and game content that we will discover together in the review phase. Pros and cons ✓ Control system suitable for everyone
✓ Castle Club Mode x Local multiplayer
x Some may find it too challenging

Do you want to be a video game expert and know all the tricks, guides and reviews for your video games ? Holygamerz.com is a group of video game fanatics who want to inform you about the best tricks, guides and tips. We offer you the best information to be a reference in gaming, so here you can find guides, tricks, secrets and tips so you can enjoy your games to the fullest. Are you ready to get all the achievements of that game that you resist so much? Enter now and enjoy your favorite video game to the fullest!
News + Joe Biden and Fortnite, how to exploit a video game ❯