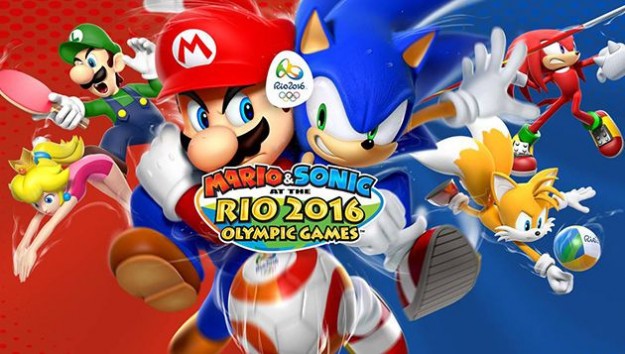 We have just passed the middle of June and the European Championships have just started, the Copa America is coming to an end and in a few days Wimbledon, the most important tennis tournament in the world, will start. In the midst of all these sporting events we certainly cannot forget that in August there will be the Olympics in Rio De Janeiro in Brazil. After almost two and a half months from the 3DS version we return to the Brazilian city with Mario and Sonic at the Rio 2016 Olympic Games, this time in its Wii U version, out on June 24th. In virtual costume and slippers we are preparing to give you our opinions on the Nintendo summer game in the “highly anticipated” review.

Everyone to the beach

Mario and Sonic at the Rio 2016 Olympic Games in its Wii U version looks better than seen on 3DS. We don't have a real menu with game modes, but our Mii will find himself strolling on Copacabana beach, which will act as a real hub. At the first start we will only be able to play single games and by winning the various events we will unlock all the other modes starting from the Tournaments. These will consist, as predictable from the name, in a series of rounds based on a particular sport, chosen from a list of three that changes every time, really existing in which we will have Mii as opponents from all over the world, starting from the qualifications up to the coveted final. The goal is to finish in the top three and win a medal; as we do so we will progress and have access to new game options. Sometimes, during the Tournaments, we will be approached by characters from the world of Sonic and Mario: they will challenge us once we have the final victory in an attempt to take away our well-deserved prize. By beating them, they will join us and go to replenish the roster in that particular event. Winning many tournaments will unlock the Clash of Heroes, where we will have to choose whether to be on the side of Mario or Sonic and face the other team (this time made up of characters from the two sagas) in a competition where the goal is to defeat the leader or eliminate more members of the opposing team in the rounds available to vary by the player. Playable events will be random and losing team members will no longer be able to participate in subsequent ones, unless the captain wins a match (however, only replenishing two characters). To make things more exciting, cards have been inserted: these will serve to inflict penalties on our opponents such as sending a member away for the entire Clash of Heroes or forcing the enemy Hero to take the field and potentially finish games immediately. All modes will be playable in both single player and competitive or cooperative multiplayer, but only locally; the only iteration with players from all over the world will be the Miiverse unfortunately unusable during our test.

To have more hope of victory in the various events, our Mii will be able to equip himself with clothes and suits that will improve his statistics. To get them we will have to win the Tournaments by satisfying the special conditions, or hope to be lucky at the Rio 2016 Stand. Here by spending 5 coins / rings it will be possible to buy a ball (or 10 using 50), this will contain a random item among clothing items and stamps for use in Miiverse posts. To earn coins or rings we will have to win a large amount of games otherwise we will be able to use all amiibo, except those of Mario or Sonic. By making our Wii U read these two statuettes, however, we will unlock the Leagues dedicated to the two characters, by winning them we will get pieces of equipment that will greatly increase our characteristics.

Less disciplines, but to create with greater care and more "realistic"

Compared to its portable counterpart Mario and Sonic at the Rio 2016 Olympic Games on Wii U has less playable disciplines, but better realized. The developers have eliminated the Golf, the 110 meters hurdles and the long jump and have replaced them with the triple jump, the 4 × 100 m relay and the 7-a-side rugby, great news of the port on home console. The Plus Events have also been reduced and involve only the most important sports: football, the aforementioned 7-a-side Rugby and Beach Volleyball. Challenges, as they have been renamed, have less particular rules than the 3DS version and have been simplified: every action of the player will increase the counter of the challenge points that will be assigned to us once we have scored the goal, the point or the goal in our favor. The same thing will happen for the opposing team, once a certain amount is reached the game will end. During these Challenges, objects have been added that will serve to distract the enemy, once we have succeeded in our intent, thanks to shells or flowers shoot various fireballs, our score will increase and we will be able to close the match in a short time. As for the other 11 sports present, the developers did not want to overturn the game mechanics and they will all be playable with the Nintendo pads at your disposal including the Wiimote. This time we will not risk the life of our device (or ours) by rotating it in pursuit of objectives, but it will all be controlled by the classic, and much more comfortable, lever or d-pad. As for the disciplines, we move from quiet archery, where we will have to hit as many targets as possible within the time limit and make the highest score at Artistic Gymnastics, which sees us struggling with a rhythm game where we will have to press the keys to right time to climb the rankings and win the gold medal. Compared to the title on 3DS, we appreciated the loyalty of the sports to their real counterpart more and, above all thanks to the control system, we found the time spent in front of the console more enjoyable.

Let's get to know the world

The visual aspect convinces, even if some aspects are less cared for

We very much appreciated the work done on Mario and Sonic at the Rio Olympic Games in the Wii U version by the developers of SEGA; the representation of Copacabana beach is particularly successful, including small details such as footsteps on the sand or the waves of the sea. A lot of care has also been taken in the models of the various characters and on the game arenas, while the audience is less visually beautiful, composed of the various minor characters of the two sagas such as the koopas or the various toads. Walking along the beach we will be able to meet many Miis that represent the countries involved in the next Olympics: talking to some of these we will be able to receive or some information on the countries they belong to or suggestions for the various game modes; this is a great way to learn trivia about the world we live in and thus educate even the little ones. One of the negative notes is given by the inactivity in the various minigames of the GamePad Wii U which is used only as a second screen, without taking advantage of the touch screen. The title, as per Nintendo tradition, was fully translated into Spanish, both in the (few) voices present and in the texts.


Verdict 7.5 / 10 Yes, but there is no lighting of the Olympic torch, uncle. Comment The Wii U version of Mario and Sonic at the Rio 2016 Olympic Games is a clear step up from the 3Ds version analyzed a few months ago. Unfortunately, it pays not to have a story mode and that the multiplayer sector is only usable locally but if you have a large group of friends we can guarantee you hours and hours of guaranteed fun. As for the technical side, we really appreciated the models and the graphics engine never had a hesitation even in the most excited moments. If you liked the 3DS version and you have Wii U at home, don't hesitate and hit the shop on June 24th. Pros and cons ✓ Beautiful models of the characters
✓ Better control system than the 3DS version
✓ The Clash of Heroes is interesting x A story mode is missing
x Little used Wii U gamepad
x Public models to be reviewed

Do you want to be a video game expert and know all the tricks, guides and reviews for your video games ? Holygamerz.com is a group of video game fanatics who want to inform you about the best tricks, guides and tips. We offer you the best information to be a reference in gaming, so here you can find guides, tricks, secrets and tips so you can enjoy your games to the fullest. Are you ready to get all the achievements of that game that you resist so much? Enter now and enjoy your favorite video game to the fullest!
The Last Guardian Review ❯