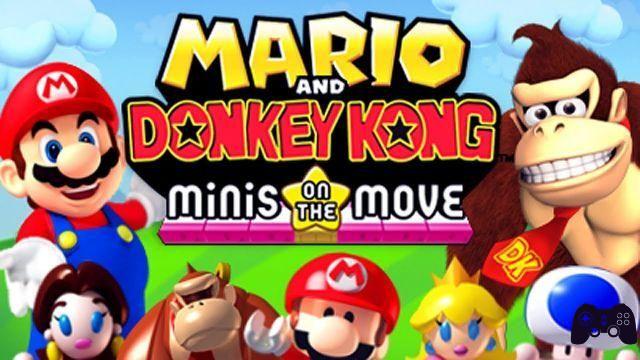 The Kingdom of Mushrooms, as we know, does not live only on sliding platforms and therefore between one adventure and another of the most famous plumber in the world, several spin-off series sprout ranging from sports such as Mario Golf, to the much more charismatic ones. like the Luigi's Mansion brand; the protagonists are always the inhabitants of the Kingdom of Peach but the context and the gameplay change profoundly from series to series. The same goes for the Mario vs Donkey Kong series, born in 2004 as a spiritual sequel to Donkey Kong for Game Boy, itself a remake of the original Donkey Kong for NES; after the first chapter for Game Boy Advance, two chapters for NDS and a purely digital chapter on DSiWare, it has finally arrived on the 3DS eShop Mario and Donkey Kong: Minis on the Move, at the modest price of € 9,99.

Unlike its predecessors, Minis on the Move it does not have a real supporting texture. If in the other chapters Donkey Kong got angry, for one reason or another, deciding to cause various confusion and headache puzzles to poor Mario and his toy counterparts, in this fifth chapter we will be thrown immediately into the action, with four main modes (which we will unlock slowly) and as many minigames.
The absolute protagonists are once again the Mini, small toys with the appearance of the inhabitants of the Mushroom Kingdom that will automatically move on the path that the player will prepare in real time. The main objective is to collect Stars, the more we will have more levels, modes and extras we can unlock; to receive the Star we will have to complete each level with all three colored coins, bearing the emblem of Mario above them, and then create a "Perfect".
Let's then move on to the analysis of each game mode. In Mario in Marcia we will have, as per the tradition of the DS chapters, to lead the Minis to the finish line in the shortest possible time; to do this we will have to use a series of blocks to create the most advantageous and effective path while collecting the three coins mentioned a little above. We will be able to accumulate up to five blocks in the tube on the Touch-Screen; at the fall of the sixth the level will fail, as we will go in game over in the unfortunate case the Mini does not have a block under its feet and falls into the void.
In Palazzo dei Puzzle we will have limited and defined blocks available, with which we will have to create the path to our Mini and the time will not decrease but will flow normally; this mode is reminiscent of the classic puzzles of Professor Layton and is also the relatively simpler of the four main ones.
In Mini Melee we will have to bring two or more Minis to the finish line, moving the blocks already present on the path, or using the special blocks, between rotating mobile platforms and springs, and obviously collect the three coveted coins in the meantime.
Finally in The Great Jungle, we will have to collect the ten stars scattered around the vast playing field, placing the blocks that will fall into the tube and obviously keeping in mind the limit of five and the time that decreases very low and malicious; there are only three levels for this mode, precisely because each of them counts as 10 of the others, and because they contain the sum of the experiences made in the previous modes, becoming in effect the most hardcore mode of Minis on the Move.
With a total of over 170 levels, the title offers a good dose of fun, and is perfect for both short sessions, dutiful in a portable console, and for long games on the sofa or in your bed.

A block for all tastes

Beyond the Mini, the other undisputed protagonists of the game are certainly the blocks: there are all types, from the classic paths of various colors, each with its own properties, to those obstacles that must be avoided at all costs, such as spikes or toy enemies, passing through the springs that allow you to skip a space of the path, to the conveyor blocks that lead our Minis in a certain direction. These are just some of the blocks present and that we will be able to find in the game, and make the gameplay of puzzles varied by making the player try different possibilities of resolution (especially in Mario in March, Mini Melee and The Infinite Jungle).
There are also some special techniques that allow you to save time or substantially increase the score, two of these are based on creating certain shapes on the path, for example by making a round circuit, we can gain precious seconds, while creating one in the shape of 8 we will get a special block that will momentarily transfer us to another platform that will be hit by a rain of coins (special included) that we can collect by moving the Mini on the touch-screen; in normal levels, on the game map we will be able to touch our Mini, allowing it to go faster, moreover every time our toy sees the Milestone Star, it will start in a frenzied sprint towards it (blocking the passage of time; it is up to the player to exploit all these techniques in the best way to get the highest possible score.


Small price and many things

In the rich Create and Share, the game editor, we will be able to create our levels with all possible blocks but be careful, as it already happened in Pullblox and Fallblox, to share your level we will first have to test it and get a perfect one; therefore between the levels of the users we will never find impossible challenges as happens in other titles equipped with editors. This feature therefore always provides us with new levels, giving us hours of extra fun even after finishing the main modes, making Minis on the Move almost infinite.
If the puzzle part of the title weren't enough, they are also present four mini-games that use the touch-screen of 3DS and are always obtainable through the Stars of the main mode: in Break the Cube we will have to use the Mini Mario to destroy a Cube as quickly as possible, with two degrees of difficulty (in the second we will have other shapes and not a simple cube) levels for each; in the Lifting Station we will use the touch-screen to raise or lower a platform, avoiding the Bullets Bill and collecting as many coins as possible in the set time; in Lancia i Mini, as the title suggests we will have to hit targets, mobile or not, with our Mini Mario, throwing them with a practical giant slingshot; finally in Fishing the Shy Types, we will have to catch as many enemies as possible through a practical harpoon, which we will always use via touch-screen. In each of the minigames we will therefore have to aim either at the completion (Break the cube and Station of elevation) or only to make a very high score (Throw the Mini and Fish the Shy Types) minigames that guarantee short and intense games without puzzles to solve.

Mini on the screen

The graphic sector of the game passes from the minimalist 2D graphics and with a top view placed on the touch-screen, where in fact the whole fulcrum of the game takes place, to the polygonal one that reproduces exactly the map of the level and that we find in all modes , including minigames: nothing exceptional but, you know, in a puzzle game the graphic aspect is secondary. The 3D effect is not among the best, perhaps due to the fact that the whole game could easily take place only on the touch-screen, so we will soon find ourselves deactivating it, especially in minigames where we will need the upper screen.
The music is almost all remixes of the themes of the previous chapters with some nice additions in some levels but they manage to accompany the adventure without distracting the player from the puzzles.

For being a digital-only title, Minis on the Move offers many things to do at a relatively low price, placing itself perfectly, if you are a fan of puzzle games, among the must-have titles of the Nintendo eShop.

Verdict 8/10 From the subtitle it seemed like a Sony exclusive Comment While not free from technical defects, Mario and Donkey Kong: Minis on the Move is perfect for spending some time squeezing your brains, placing itself among the best puzzle games on 3DS alongside Pullblox and Fallblox. Suitable for lovers of the genre and those who obviously appreciated the previous chapters of the spin-off series. Pros and cons ✓ Almost infinite game
✓ Remarkable quality / price ratio
✓ Growing challenge x Not suitable for non-puzzle lovers
x 3D effect not exploited in a way

Do you want to be a video game expert and know all the tricks, guides and reviews for your video games ? Holygamerz.com is a group of video game fanatics who want to inform you about the best tricks, guides and tips. We offer you the best information to be a reference in gaming, so here you can find guides, tricks, secrets and tips so you can enjoy your games to the fullest. Are you ready to get all the achievements of that game that you resist so much? Enter now and enjoy your favorite video game to the fullest!
News Battlefield V: Single player trailer from the Microsoft conference ❯

Add a comment from Mario and Donkey Kong: Minis on the Move review