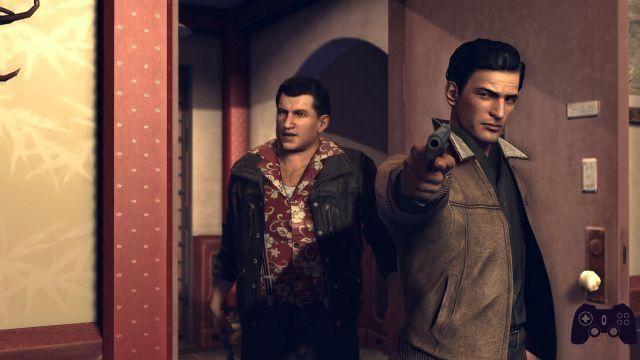 Over the years, the world of organized crime has carved out a certain space for itself in practically every media: from literature to cinema, from television to theater, it is not difficult to come across more or less memorable representations of this phenomenon. Even the videogame scene has not remained immune to the charm of these issues and has proposed products linked to the undergrowth of the underworld, including real milestones. Mafia: The City of Lost Heaven (released in August 2002) is remembered by more than a few players as one of these titles, so much so that it can rival another giant of the criminal genre such as Grand Theft Auto III. Six years later Mafia II hit store shelves, a sequel to that first successful chapter and curiously still "fighting" with another Rockstar Games title, Red Dead Redemption. But will the creature from 2K Czech be up to the competition again this time?

Don Salieri sends you his greetings

Mafia II puts us in the shoes of Vito Antonio Scaletta, who emigrated with his mother and sister from Sicily and moved to Empire Bay, a fictional city in the United States of America. Here he meets Joe Barbaro, co-star of the game and partner in misdeeds, at least until Vito's arrest for attempted robbery. The prospects at this point are jail or enlist in the army, and our virtual alter ego will opt for the second one, finding himself in the midst of the Second World War and involved in Operation Husky, which from Sicily will give way to the allied invasion of the Italian peninsula. . And it is on this occasion that he has his first contact with the world of the mafia, being impressed by how the boss Calogero Vizzini (known as Don Calò) manages to convince the Italian forces to surrender and throw down their weapons. Some time later Vito is wounded in battle and gets a temporary leave, and then decides to return to Empire Bay where he will start together with Joe (who gives him a fake medical certificate that avoids having to return to the war) a climb that he hopes will bring him. to enter the Cosa Nostra and the family ...

This second iteration of Mafia is presented at the level of play as a mixture between a free roaming and a third-person shooter. The first of these two components, however, is not particularly successful: Empire City is in fact poor in terms of interaction and secondary missions are completely absent. The few secondary activities can be summarized in some clothes shops where you can change clothes to clear the "suspicious level", shops where you can buy firearms and ammunition, workshops where to repair and modify cars and petrol stations where you can refuel vehicles in case you run out of gas. The interaction is limited to the exploitation of these places to do a little shopping or alternatively to give oneself to robberies, "cleaning" them of the money and goods on display. To further bury the success of the open world aspect of the experience, there is the almost absolute lack of incentives to explore the city, which only makes sense for the more "completist" players determined to collect the collectibles scattered around the map and forces all other types of players to cross Empire City from point to point just to start the main missions related to the plot. These open world mechanics almost an end in themselves, however, are counterbalanced by a solid and successful third-person shooter component, which while not inventing anything proves to be up to the task and manages to give a certain amount of fun to those who are playing thanks to a good variety of weapons available. These are divided into four groups: throwing weapons (Molotov cocktails and grenades, in addition to the bare hand), automatic weapons, pistols and shotguns, and are selectable by the directional arrows of the pad (respectively left, up, right and down) and they include in addition to the classic gangster weapons of those years such as the Thompson also "guns" taken from the Second World War. A well-implemented roofing system is also added to the available arsenal that allows you to adhere (and hide) to any wall, box or obstacle that may stand between Vito and the enemies on duty.

Women and cars joys and sorrows

Another very successful aspect of Mafia II is that related to driving. In addition to a suitable quantity of vehicles (both for those of the 40s, which include machines with more bulky and generous lines and as regards the "modern" means of the 50s, more slender and performing) what is striking is the almost simulative cut given to this part of the experience: for example, it is possible to save up to ten vehicles in your garage, which however (unlike what happens in other free roaming) are not automatically repaired once deposited, but retain all the damage suffered by the bodywork making it necessary to take them to the workshop to put them back to new. There is also a certain tuning component, with the possibility of modifying the cars to improve their performance, change the color of the bodywork or customize the license plate to prevent the police from chasing the vehicle if it is in the list of those wanted. Each car is also equipped with its own tank, which empties as it is used and sometimes makes it necessary to go to a distributor to fill up as it would in real life. Finally, it is possible to make the driving experience even more realistic by selecting simulation driving in the settings, which involves greater sensitivity to certain parameters such as the weight of the vehicle, the speed at which you are driving or the atmospheric conditions of Empire Bay, giving a lot of satisfaction to those players looking for an experience as realistic as possible. However, if the care and attention dedicated to this aspect are clear and visible to all, it must also be said that some stylistic choices do nothing to support the work done by 2K Czech and rather act as a ballast: in addition to the already underlined limits of free roaming proposed in Mafia II, the choice of making the weather "static" and pre-set according to the current chapter (rather than making it random or in some way dynamic) cuts the wings of the experience steering wheel, especially if you play by activating the simulation driving option.

Mafia II does not miss even a few bugs: some not particularly heavy (such as when the Empire Bay police forces do not respond in a timely manner, occasionally "overshooting" when you exceed the speed limits in your car or collide with some other vehicle), others more annoying and such as to having to reload the previous checkpoint, and finally a couple of heavy problems in chapter 14 such that you have to start the whole chapter from the beginning (triggers that do not go off, movies that do not start and the like). From a technical point of view, however, very beautiful things on the screen, such as the detailed close-ups of the various characters during the cutscenes, alternate with other more "dirty" ones, with less detailed textures typical of the Playstation 3 version. As for the sound sector, on the other hand, there is a decidedly rich soundtrack (about 120 songs) that ranges from 40s sounds to 50s tracks, touching musical genres such as rock, blues and R&B.

Verdict 7.5 / 10 Sweet and bitter Comment Mafia II is certainly not "an offer that can not be refused": the successful driving and third-person shooter components are mixed with less successful aspects such as free roaming practically an end in itself and some short-sighted solutions (such as in weather management), which rather than enhancing the more accurate aspects of the experience revise them downwards. Net of bugs and defects, however, it remains a mature story, with dark colors and a bitter aftertaste, as well as a "mafia" atmosphere certainly made well. For a hypothetical sequel, however, a choice must be made to get out of "limbo" and establish itself definitively: abandoning the open world component in favor of pure action or marrying its mechanics in its entirety, making it more than a (superfluous) side dish. Pros and cons ✓ Mature and cinematic story
✓ The simulation driving gives more than a few satisfaction ... x ... But it is not helped by some choices made
x Free roaming for its own sake
x A few bugs too many, some even annoying
Do you want to be a video game expert and know all the tricks, guides and reviews for your video games ? Holygamerz.com is a group of video game fanatics who want to inform you about the best tricks, guides and tips. We offer you the best information to be a reference in gaming, so here you can find guides, tricks, secrets and tips so you can enjoy your games to the fullest. Are you ready to get all the achievements of that game that you resist so much? Enter now and enjoy your favorite video game to the fullest!
Esports special: analysis of a competitive gamer ❯