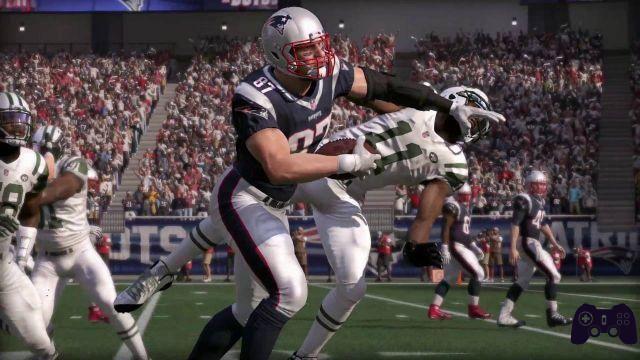 The Madden series is perhaps one of the most famous in the hands of Electronic Arts overseas. In Europe, however, there is still a lot of distrust (and ignorance) about a sport that makes entertainment one of its fundamental components, given the great duration of a single match. Over the years, thanks to televisions, it is slowly starting to inform and raise awareness of both American Football and the videogame series dedicated to the historic coach John Madden. Thanks to the start of the season, today we are going to analyze Madden NFL 17 in our review.

Road to be a Legend

As specified in our introduction, the Madden series is one of the historical ones for EA (just think that the first edition came out in 1988). Year after year, the Canadian company has modified each title based on competitive feedback (after the acquisition of the exclusive NFL rights, EA forced 2K and Visual Concepts to stop their series in 2004) and above all to that of the users. The house of FIFA has therefore managed to create an excellent product also in the last season, but it is only in this 2016 that it has perfected it.

Franchise Mode allows you to play as coaches, players and owners

As for the modes, in this Madden 17 there are only the Franchise Mode (Fifa's career mode) and theUltimate Team (which we mentioned during the review of FIFA 16, last year), a historic mode that attracts a lot of criticism in every edition. Contrary to what has happened in recent years with the largest football simulator, the developers of EA Tiburon have focused much more on creating a single player experience. Franchise Mode allows us to choose whether to approach a career as a coach, a player or an owner; in each of the three roles their tasks are upset and, above all, made more and more demanding. As Coach we will have to be careful of the patterns on the pitch, exchange, renew or sign our players, and we will be able to accumulate experience by reaching more and more goals on the grass. This will allow us to improve our virtual alter ego and go higher and higher until we win the Superbowl. As a player (we will be able to choose whether to create it from scratch and start as a rookie or use a real one) we will have to commit ourselves to our role and lead the team (controlled by the AI) to victory, building our story to become legends. On the other hand, the duties of the owner of a Franchise are different: here, in addition to the role of coach, we will also have to think about the economic side (which ranges from ticket prices to the possibility of changing cities or rebuilding their stadium), and at the end of the season to make ends meet without bringing the team to bankruptcy.

One of the complaints expressed by the players in recent years concerned the duration of the matches: as in reality, a match can last from 2 to 3 hours (with real time) given the countless breaks present, also due to the fact that with each action the time is stopped. EA Tiburon has, therefore, listened to these complaints and implemented a system to play only some specific actions. This significantly decreases the duration of the encounters and, thanks to a particularly developed AI, guarantees realistic results even with minor difficulties.

We will no longer be bound to throwing and party games

For years the Madden series has been carrying some major flaws, as far as gameplay is concerned, including the lack of realism in some situations (also thanks to a very little credible collision system). After many editions, the developers of EA Tiburon have managed to get out of the limbo they were in and finally improve this aspect too. Now we will not be limited to just games based on tosses and receptions, but we will also be able to take advantage of the races of our Runningback (RB) trying to get to the end zone and make a goal. To do it ourselves, however, we will have to call patterns: these will serve to decide whether to take a solitary action or whether to rely on a passage of our Quarterback (QB). Once we have chosen the “call” to make, we can summarize it using the right trigger to be able to decide where to move or to whom to throw the oval. If we choose to take advantage of the QB we have the possibility to decide in advance who to allocate the ball to, thanks to the graphic interface that will show a series of buttons on the screen above the players' heads; this will allow us to remember at any time which companion will correspond to pressing the button on our pad. We will have a huge number of launches at our disposal, variable thanks to the prolonged pressure of the key of the corresponding man, and it will be possible to act - in addition to speed - also on height, using the backbones on the left of the controller.

Great improvements also regarding the AI ​​in these situations; this year, during our rehearsals, we noticed a lot of work by the developers to avoid situations where the defenders could look like machines, such as intercepting passages without even looking at them. As for the race, however, we have already said about the great work in the collisions that EA Tiburon has done, but in addition to this, numerous options have been added for our RB who will now be able to skip the defender who is throwing himself on him. or make various feints to be able to free yourself and aim for the goal. Quite confusing, however, remains the defensive work, since we will not be able to select the player we will need most on the fly, thus allowing the opponent to make an easy goal in the case of particular situations, such as scrums near the end zone.

Ignite, why are you Ignite?

An Engine that has had its day?

Contrary to what we have already seen in Fifa 17 (you can read our first impressions in the Special Fairs dedicated to Gamescom 2016), EA Tiburon didn't want to bring the Frostbite Engine to this NFL Madden 17, and this, unfortunately, is sometimes noticeable. Although the atmosphere and the models of the players are very well rendered, we have encountered some problems with the physics of the same in some situations, such as the classic ragdoll effect after a series of tackles. Compared to Madden 16, the presentations to the games have also been changed, which have been made much more accurate and similar to those visible on television (also thanks to a change to the commentary booth). One of the best aspects of this Madden 17 is the almost constant presence of updates regarding the game world: it will often happen to access and find updates to the rosters or to the comment lines, to be downloaded in a very short time. This allows the title to always be in step with the times and not to be old after a few months. Unfortunately, Madden NFL 17 is only available in English for both commentary and lines of text.

Verdict 8.5 / 10 There is here that you scotenno and you blow all the teeth. Comment Last year the Madden NFL series made great strides compared to the past, and this edition confirms the positive trend. The historical problems with the collision system, which made racing completely useless, have been fixed and finally we can talk about realistic and fun games. In addition to this, the television aspect has also been fixed, another of the historical flaws of the brand. The presence of the Ignite Engine is felt and, despite the few years on the shoulders, it seems that its time has also come, despite the beauty of animations and models. Surely this is the best title in the series and it can compete with what, by fans, is considered the best American Football game ever: NFL 2K5. Pros and cons ✓ Functional and modern running system
✓ Beautiful TV presentation
✓ Fun Franchise Mode x The Ignite Engine has had its day
x Some problems with physics
Do you want to be a video game expert and know all the tricks, guides and reviews for your video games ? Holygamerz.com is a group of video game fanatics who want to inform you about the best tricks, guides and tips. We offer you the best information to be a reference in gaming, so here you can find guides, tricks, secrets and tips so you can enjoy your games to the fullest. Are you ready to get all the achievements of that game that you resist so much? Enter now and enjoy your favorite video game to the fullest!
Guides How to unlock the Gambler on Bravely Default II ❯