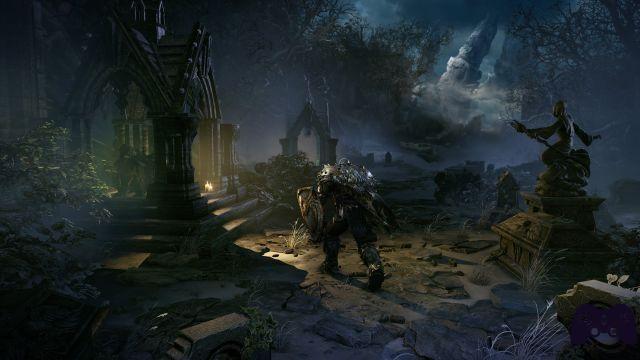 It was the now distant October 2014 when CI Games released Lords of the traps, developed in collaboration with Deck 13. Available on PlayStation 4, Xbox One and Windows PC (via Steam), this "clone" of Dark Souls had left hope for an all-western RPG that could hold its own against the pillars of the genre . The attempt did not end in the best way, with a qualitatively fluctuating product from various points of view but which, despite everything, does not completely disappoint, giving, indeed, even more than interesting moments.

The Steam code used to redeem Lords of the Fallen and which allowed us to write this review was kindly provided by Kinguin.net, to whom our thanks go.

Time to crack some Rhogar

Lords of the Fallen will begin with the protagonist, a former convict named Harkyn, intent on fighting a beast of considerable size. The game's plot centers on this character who will fight risking his life to counter the invasion of the Rhogar, demonic creatures from another dimension that threaten humanity. All this will take place in a medieval fantasy setting and eliminating bosses and non-bosses for a total time of about 16-20 hours, depending on your playing style and ability. As you continue with your adventure, you will meet some "important" characters who, although they have a certain relevance in terms of plot, are unable to leave their mark in any way, simply remaining in the outline. The same discourse then applies to the protagonist, who equally fails to "impose" himself with his personality, thus becoming a mere performer without art or part. For these reasons, to which a constantly subdued narrative is added, from the point of view of the plot Lords of the Fallen fails to convince practically at all, trying to recover points on a combat system that is certainly more successful.

A Soulslike in all respects

The game mechanics of Lords of the Fallen largely reflect its Soulslike adjective, but let's go in order.

During the character creation phase, although it is not possible to change the aesthetics in any way, we will be given the possibility to choose between three classes, namely Warrior, Thief and Cleric, of which each will start with a slight advantage in certain statistics. A magical branch must then be chosen between Brawl, Deception and Comfort, each of which offers different types of spells. Although the choice of class is not relevant except in the very first hours of the game (as it is possible to increase the statistics in a completely different direction and equip any type of weapon), the same cannot be said of the spells, forcing the player to have to start a new game (or a NG + ) to be able to change your choice. Our character will have three bars available, one for health, one for stamina, used to make attacks, and one for mana, used to cast spells and ranged attacks, forcing the player to pay some attention to them. .

The mechanics do not differ too much from what has been seen with the various Souls, despite the news that still try to differentiate Lords of the Fallen. Starting from the equipment, whose weight must be taken into account in order not to have problems in moving and dodging, the character will be able to wear an entire set of armor, plus a pendant, a shield, a weapon for the main hand and a glove which, using mana, allows you to perform ranged attacks. Also in this case we will have a button dedicated to light attacks, one for heavy ones, another for parrying, another for dodging and so on up to cover all possible actions. Our protagonist will then be equipped with an initially limited number of potions that will allow us to recover health. During the exploration, moreover, it will be possible to find various chests scattered along the game map, as well as a series of audio that make up the collectibles of the game and that are useful to dissect the historical background that lies behind it.

From what has been said so far, Lords of the Fallen doesn't seem to offer anything too different than the competition, but that's not quite the case. There are news since the character development system that we will now describe in more detail. By eliminating the various enemies that block our way, you will get experience points plus a bonus linked to the number of the succession we have reached that can be spent, or kept safe, inside the checkpoints. Doing this allows the acquisition of statistical points or spell points, which can be used to increase the various stats of our hero (which we emphasize being present in a much more simplified way than a Dark Souls) and to buy and / or enhance one of the various spells. available. However, using a checkpoint starts the kill sequence from scratch, thus leading to lesser rewards. With this system the player can decide whether to risk more and more in exchange for more and more experience, or whether to play it safe, however, dealing with the need to grind from time to time. Furthermore, in Lords of the Fallen it will be possible to insert runes inside the equipment, provided there are free slots, which will lead to an increase in the capabilities of our character. Added to this is the presence of some portals, which will allow the player to access another dimension. In these places, which can only be explored after eliminating the corresponding boss, it will be possible to find challenges to face and / or rewards, not necessarily "free".


Also in Lords of the Fallen, as was to be expected, once the adventure is over, it is possible to start the New Game + (NG +), where you restart the game while keeping your achievements. In NG + you will find equipment previously inaccessible and you can unlock an additional branch for spells, without considering the "level up" of monsters and bosses. In this way, the developers have tried to increase the unfortunately low longevity of the title, offering new content and a slightly higher level of challenge.

And you call this difficult?

The difficulty level of Lords of the Fallen is decidedly variable. In the first hours of the game, in particular, excessive attention must be paid to continuing to avoid certain death. However, with the development of our character, the anxiety of dying that haunted us at the beginning has gradually vanished, thanks also to the enemies who let themselves be killed more and more easily. In the course of our gaming experience, as soon as we learned the Earthquake spell (from the Brawl branch), everything has become overly simple. This spell, in fact, brought to the maximum level, is more than enough to eliminate most of the enemies present in a single shot, without considering its wide range of action. We then constantly got the feeling that the bosses were easier to deal with than the opponents encountered during the exploration. This is probably due to the presence of checkpoints located a few steps away from the clashes, with movement / attack patterns that are all too simple, intuitive and easily circumvented. After just one failed attempt, it will be very easy to understand how to avoid every move and respond accordingly, with the added advantage of generously sized “arenas” that allow every possible room for maneuver. Nevertheless, the level of challenge still manages to be satisfying, albeit less punitive than what the Souls have accustomed us to.

A good but not excellent technical achievement

From a purely technical point of view, the Lords of the Fallen development team has done a more than good job, despite a few flaws scattered here and there. We often found ourselves dealing with bugs related to artificial intelligence or the "crosshair" that signals the goal, but in general this did not undermine the gaming experience excessively.

The movements and animations of the polygonal models were well done and on PC you can fully admire its potential. The areas that will be visited, moreover, are easily able to fascinate the player thanks to the beauty of the proposed settings and to an important soundtrack. Too bad, however, that the excessive linearity of the maps, except for a particular macro-area, ends up partially ruining the experience linked to the exploration of the world of Lords of the Fallen.

With our configuration, shown below, we were able to play with every setting at maximum, despite the recommendation to use 6GB of vRAM (against our 3GB).

It certainly wasn't possible to keep 60fps steady with our setup, but we managed to stay between 30 and 40fps in a more than stable way, with declines noticeable only following the casting of some spells in specific areas. This is probably due to a particular care taken inoptimize the product, an increasingly rare feature.

Verdict 7.5 / 10 A Dark Souls without Souls Comment Lords of the Fallen is that title in which all of us lovers of the genre had placed our expectations. In part we have certainly been rewarded since we got our hands on a product with a solid and still satisfying combat system despite the constant decline in difficulty. Unfortunately, the comparison with the Souls series was inevitable, as were the constant comparisons between one side and another. From this "clash" Lords of the Fallen, unfortunately, is unable to come out the winner, but this does not mean that he has not been able to have his say, because overall it is a good Western-style RPG, with some flaws scattered a little. everywhere but also with more successful elements than his opponent. It may not be a day one title or one to focus attention on in view of Dark Souls 3, but it is certainly part of the list of those games to be recovered as soon as the opportunity arises. Pros and cons ✓ Artistically suggestive
✓ Good technical realization
✓ Some interesting news
✓ Good replay value
✓ It's not easy... x ... but not too difficult
x Low longevity
x A few bugs scattered
x Undertone narration
x Easily forgotten characters
Do you want to be a video game expert and know all the tricks, guides and reviews for your video games ? Holygamerz.com is a group of video game fanatics who want to inform you about the best tricks, guides and tips. We offer you the best information to be a reference in gaming, so here you can find guides, tricks, secrets and tips so you can enjoy your games to the fullest. Are you ready to get all the achievements of that game that you resist so much? Enter now and enjoy your favorite video game to the fullest!
News Dragon Ball Z: Kakarot - First introductory video ❯

Streets of Rage 4 | Review, a comeback in style

Add a comment from Lords of the Fallen review