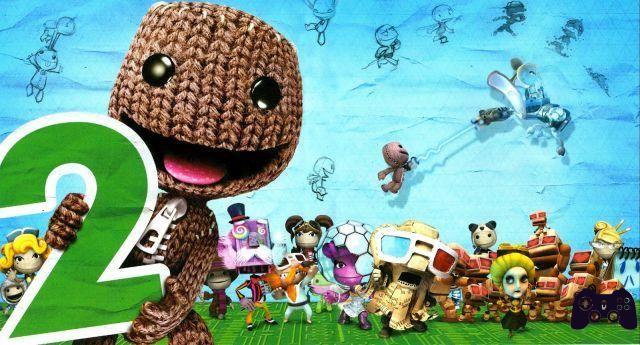 Media Molecule made us wait a long time for this second chapter: announced in the beginning for November 18th, it was postponed to January 19th for the rest of the world and to January 26th for us poor inhabitants of the Bel Paese.

With a week of full immersion in this masterpiece, I can say with certainty that it was worth it: Little Big Planet 2 improves on its predecessor in several points.

A new threat is destroying the DIY world. A giant vacuum cleaner is literally sucking up Little Big Planet's inhabitants and objects. Even our dear Sackboy was about to do the same, when the Alliance (initially composed only of Larry Da Vinci and the legendary Avalon Centrifuge) manages to save him before he is reduced to ashes. It will be the Sackboy's job, and ours of course, to bring the other Alliance members together and teach Negativitron and his henchmen a lesson.

The main story is divided into 30 levels, accompanied by the usual bonus challenges that this time will give us many new costumes and gadgets depending on the score we get.

In addition to the "Links", in the arsenal of Little Big Planet 2 there are many new gadgets, some of them already provable in the beta of September, which are added to the various of the first chapter, enriching the online levels and allowing more and more different actions. Let's analyze them in detail.

The "Trampoline", certainly one of the funniest novelties, can be adjusted to make us stand out in orbit or to make us float at low altitude. The "Grapple" allows us to attack and swing (even to other Sackboys) like new Samus Aran or Indiana Jones. The "Sackbots", protagonists in the story of structured puzzles with these beautiful robotic mini-Sackboys that must be brought to the end of the level; online they can do almost anything, from wearing our costumes to acting in real movie shorts created by the player himself. “Antigravity”: if in the first LBP we couldn't jump too long… well here it's the opposite, pressing X in space (or in the levels without gravity) the Sackboy will literally take off. The "Catchers": gloves that will make Sackboy very strong, allowing him to lift almost anything. The “Creatinore”, a special helmet that can shoot anything from fire to cakes, from cows to anything else we want in our “handbag”. The "Controller", a tool that in the beta made you try bit versions of Paddle and Arkanoid, can do many things, in the story it will limit itself to making us control the robotic animals of the Avalon army, while in the online you will find it in various forms ( Donkey Kong Arcade, Pac-Man, Zelda arcade, Street Fighter and much, much more).

Versus Levels and Film Levels

In Little Big Planet 2 you will not only be able to create the classic community levels but also the Versus levels, real multiplayer challenges, with points based on how many monsters you destroy or how many times you throw the ball into the basket and so on.


There are also the Movie levels, where you can film your Sackboys and create masterpieces like Titanic or Moulin Rouge; these levels do not score, but offer excellent entertainment to the online audience, guaranteeing you thousands of views (obviously if the film is shot well).

Three and a half million reasons to love

Little Big Planet 2's online couldn't be richer, there are currently over XNUMX million user-created levels; obviously not all of them are decent, but just play the most clicked and the list is long enough to take up most of the days.

The only flaw of this online remains the public servers and consequently most of the time the game is a victim of lag, slowdowns and so on… but it is the price to pay for a free and unlimited online.

This system is also useful for spreading your level around and getting visitors!

Verdict 9/10 Not a platform game but a platform for games Comment In short, this LittleBigPlanet 2 proves to be better than its predecessor. Although some flaws in the length of the story and in the online dancer, thanks to LittleBigPlanet 2 we could finally create anything and, if we are not able, we will certainly find it among the millions of levels available. LittleBigPlanet 2 is not a platform, it is a platform for games, as announced by Media Molecule in the first commercials. A gem that cannot be missed by any video game lover. Pros and cons ✓ Thousands of new costumes and gadgets
✓ Unlimited longevity
✓ A platform for creating games x Online dancer
x History slightly shorter than the predecessor
x The beauty of online levels depends on the creator (but is that really a cons?)

Do you want to be a video game expert and know all the tricks, guides and reviews for your video games ? Holygamerz.com is a group of video game fanatics who want to inform you about the best tricks, guides and tips. We offer you the best information to be a reference in gaming, so here you can find guides, tricks, secrets and tips so you can enjoy your games to the fullest. Are you ready to get all the achievements of that game that you resist so much? Enter now and enjoy your favorite video game to the fullest!
Batman Arkham Origins: Blackgate review ❯