Life is Strange: Before the Storm Episode 3 - Hell is empty review 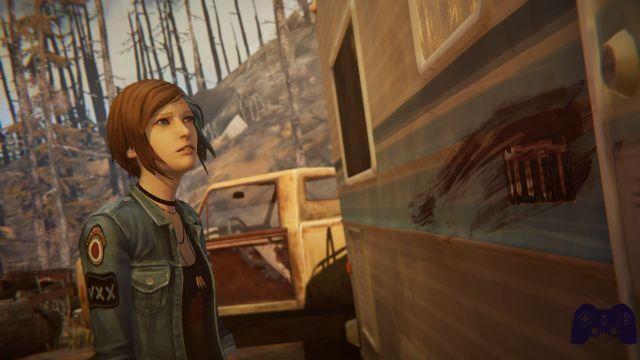 With Hell is Empty, the third and final installment of Life is Strange: Before the Storm, the US developers definitively close their adventure set in Chloe Price's past.

"Hell is empty and all the devils are here" is a verse coming from none other than "The Tempest" by William Shakespeare, a play by the English playwright that went on stage for the first time in 1611. With a skilful metalinguistic use of this verse, the boys of Deck Nine Games however, they manage to turn not only to the lovers of the late poet, but also to those who lived the splendid experience of the first Life is Strange, to whom, upon hearing about a “storm”, numerous memories will emerge. With Hell is empty, third and final chapter of Life is Strange: Before the Storm, the US developers definitively close their adventure set in the past of Chloe Price, co-star of the original title developed by Dontnod Entertainment. Waiting for the bonus episode coming in January (and exclusive to those who have purchased the Deluxe Edition of the title), we are once again ready to communicate our opinions on what is, without a doubt, the prequel of one of the most popular titles of recent years. As usual we will be careful not to do any kind of spoilers, so all you have to do is continue reading to find out if Life is Strange: Before the Storm Episode 3 - Hell is empty it proved to live up to expectations.

Admittedly, the guys at Deck Nine Games didn't have an easy task

After the remarkable twist of the last episode, ne Hell is empty we will find Chloe Price struggling not only with the resolution of all the outstanding questions, but with a significant amount of new revelations capable of upsetting the life of any person. Admittedly: the boys of Deck Nine Games they didn't have an easy task. When you go to make a prequel you must not only pay attention to the continuity, but above all try to meet the tastes of all the players / spectators / readers.. Sometimes the simplest solution is to play with continuous references to the original work and to retroactively characterize some characters already known, while other times you prefer to tell something completely unrelated to the story, but which is still useful. for a greater understanding of the narrative universe we are experiencing. Deck Nine Games, on the other hand, tries to limit the mechanisms of these two types of prequels as much as possible, focusing everything on telling a story that talks about love, the difficulties we face in life, relationships with their parents and our dependence on people we care about. Of course, there are more or less obvious references to the main chapter, but once Chloe's adventure is complete we will feel satisfied and, even if we had never played as Max, satisfied by a plot that manages to close the circle. (scene after the credits excluded). This, of course, is true if we were looking for a well-written story with well-characterized characters, while those who hoped to see all the steps that brought the characters to the initial situation of the first Life is Strange may be disappointed with the development of events. Personally (and here we inevitably enter the field of personal tastes) I appreciated this choice only at a later time. Initially, in fact, I was among those who expected a deepening of many aspects of the original chapter, but I slowly got caught up in the story and characterization of Chloe and Rachel. I admit that once the credits were over, I realized that the three episodes of Deck Nine Games succeeded in what their intent was, evidently: to get excited and involve me. And what more could you want from a title with a strong narrative component ?!

To say or not to say, this is the question!

As for gameplay, Life is Strange: Before the Storm dares nothing new

As it was logical to expect, from a playful point of view, this third episode of Life is Strange: Before the Storm does not add nothing new and / or impacting on the gameplay. We will face once again a make more or less important decisions for the plot and to explore the various game environments to find the areas where to put the sign of our passage thanks to our trusty indelible black. Once again we found the "environmental puzzles" for graffiti to be too simple and, although they do not inevitably damage the gameplay, we regret not having to work hard to get the trophies related to these "collectibles". As regards the dialogue choices, we point out the presence of a strong crossroads at the end who, given the completion statistics of the other players, managed to break the audience in half, which is extremely positive when it comes to this type of videogame.

The sound sector of Before the Storm is pure indie poetry

Nothing new from a technical point of view either, with still satisfying (but far from perfect) polygonal character models and a simply flawless sound sector. The soundtrack of Life is Strange: Before the Storm, while not reaching that of the original chapter, is a real pleasure for the ears and we are sure that you will listen to it several times once the adventure is completed (and the writer is doing it too. Right now). Completely absent, as in the previous chapters, bugs and / or frame rate drops of any kind, which allowed us to complete the adventure in the best possible way.

Verdict 8/10 I'm not ready to leave the world of Life is Strange Comment Life is Strange: Before the Storm Episode 3 - Hell is empty is a title written with rare skill and with a care in characterization of the characters clearly above average . Unfortunately, its nature as a prequel will certainly damage those who expected a series of insights and explanations on the main characters of this narrative universe, but if you manage to overcome this obstacle you will enjoy a compelling plot and a direction of the highest quality. The guys from Deck Nine Games did not want to create a product that was excessively derivative from the original material and they managed to tell a story that speaks of love, joy, fear and mourning. Some will find it a title capable of leaving indifferent (take away half a point from the final grade, in this case), while others will love it for small and subtle narrative nuances (if you are among them, add half a point to the total), but after all the world it is beautiful because it is varied and, above all, no one will ever be able to tell you anything about the subjectivity of emotions. Life is strange, but we like it that way. Pros and cons ✓ Fiction of the highest level
✓ Always accurate dialogues
✓ Able to close the circle
✓ Some relevant choices
✓ Dizzying sound sector x Few links to the main chapter
x Gameplay tight as usual

Do you want to be a video game expert and know all the tricks, guides and reviews for your video games ? Holygamerz.com is a group of video game fanatics who want to inform you about the best tricks, guides and tips. We offer you the best information to be a reference in gaming, so here you can find guides, tricks, secrets and tips so you can enjoy your games to the fullest. Are you ready to get all the achievements of that game that you resist so much? Enter now and enjoy your favorite video game to the fullest!
Special With Pad in Hand: Sales rankings from 18/09 to 24/09 ❯

The Walking Dead-A New Frontier: Above The Law review

Add a comment from Life is Strange: Before the Storm Episode 3 - Hell is empty review