In 1993, Steven Spielberg entered the hearts of the then children with a film set on an island where dinosaurs were brought back to life. More than twenty years later, coinciding with the theatrical release of J, fourth installment of the film saga, arrives on the shelves LEGO Jurassic World, the inevitable parody of Danish bricks, which traces the events of the four films and also allows you to use the Jurassic monsters. Available for PlayStation 4, PlayStation 3, PlayStation Vita, PC, Xbox 360, Xbox One, Wii U and 3DS, will the new TTGames title succeed in repeating the excellent work done with LEGO Batman 3 last fall?

Like LEGO Harry Potter, and LEGO The Lord of the Rings, too LEGO Jurassic World retraces the events of the films starring the dinosaurs: Jurassic Park, The Lost World, Jurassic Park 3 and the latest arrival Jurassic World, re-proposing the main events of the saga over the course of twenty levels. Among the repurposed scenes there is no shortage of escaping from the T-Rex on the Jeep in the incessant rain, running outside the tall grass to avoid the Velociraptors, facing the fearsome Spinosaurus in the bay and fighting the very dangerous Indominus Rex.

LEGO Jurassic World is designed (like previous games based on movie sagas) for those who know every line of the movies by heart, and thanks to the now classic LEGO humor that pervades every puzzle and situation you find yourself in front of, it will manage not to bore during the ten hours required to complete the title. Complete fidelity to films is a double-edged sword, if on the one hand it represents the reason for the purchase by die-hard fans of Spielberg's dinosaurs, on the other hand it is a minor incentive compared to titles with a completely new plot, such as precisely the aforementioned LEGO Batman 3 or LEGO City Undercover, which could be appreciated by everyone.

For fans it will be a pleasure to use Alan Grant, Ian Malcolm and Owen Grady, each with their own special skills able to help the player to continue in the game and to collect the many collectibles now ubiquitous in the games of TTGames. In addition to all the human characters, ranging from the three aforementioned protagonists, to the cast of supporting actors, up to the park guards or poachers in LEGO Jurassic World you can also use all the dinosaurs in the park, by collecting the crystallized amber hidden in each level, in fact, you can select in the free game one of the 25 dinosaurs present (including Indominus Rex and Owen's Raptors) not only, as Tim Wileman told us last April , you will be able to merge the DNA of each dinosaur and create new ones, with different skills and useful to your needs. The Dinosaur Editor adds to the classic character editor and allows each player to create their own extinct species. 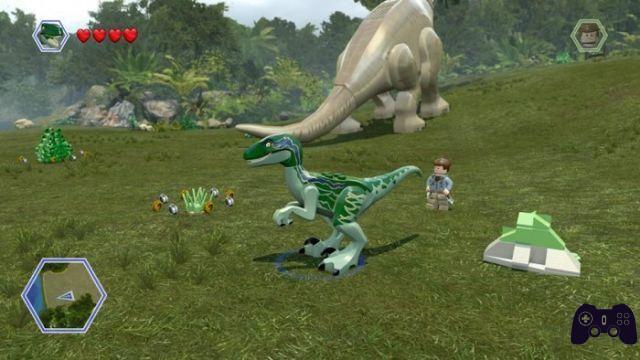 Once the storyline of each movie is complete, Chase levels will be made available, in which the player will play the dinosaur instead of the human, in a short ride on rails: although a couple of these segments are fun (Chasing the Jeep as del T-Rex ndGuido) everything is very dull and uncared for compared to the 20 main levels, inviting the player to indulge themselves with the dinosaurs on the two islands, rather than in racing; Furthermore the Raptor scene in the kitchens (iconic in the series) is not playable as predators (if not in the free game, where you will still find yourself facing the raptors with raptors): it would have been appreciable to completely retrace the game from the point of view of the dinosaurs, also benefiting the effective longevity of the title.

In LEGO Harry Potter we had the magic, in LEGO Batman and LEGO Marvel Super Heroes the costumes and powers, in LEGO Jurassic World we are faced with the works of each character (a bit like it happened in City Undercover) that will allow the player to proceed in the events and, as already mentioned, collect pieces of amber and minikits. The skills are varied and well distributed: for example, Alan Grant, paleontologist, will be able to reconstruct Legos of bones (like fans of the dinosaur world) and cut ropes and cables with the Raptor claw, Owen Grady as well as using the nail of Indominus for the same purpose, he will be able to climb walls and immerse himself in Dinosaur excrement to find useful objects and clues (the most used skill in the game); Ellie Sattler, in addition to the dive just mentioned, will be able to water the plants to give them rapid growth, a trainer like Barry from Jurassic World will be able to electrify the portals and follow the tracks, Ian Malcolm will solve equations and will be able to light a flare to explore the dark areas and Raptors will be able to jump very high and follow smells thanks to their sense of smell. As usual TTGames hasn't made any character invincible and able to do everything, stimulating the player to change often, especially in free play, the protagonist to use. 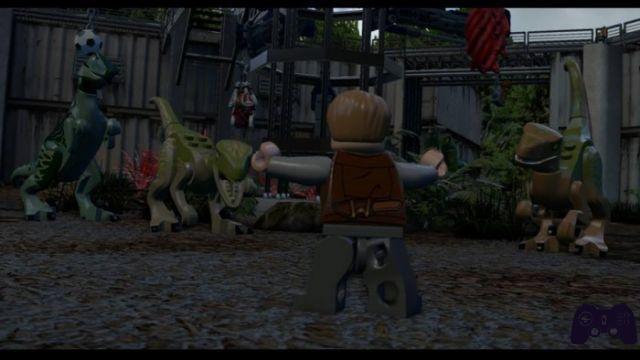 And it is precisely in Free Play that we find the main improvement of LEGO Jurassic World compared to previous titles on Danish bricks: while you explore freely on foot, in the form of a dinosaur or on a vehicle Isla Sorna and Isla Nublar, just hold down triangle to switch to the character selection wheel: here, a slot is dedicated to the list between to choose which new protagonist to play. If this improvement is maintained in the next titles, we will finally be able to say goodbye to the annoying defect that (especially in the titles dedicated to superheroes) led the LEGO man to transform instead of making us change characters.

Obviously the other features of the Free Play mode remain unchanged: being able to replay the chapters of the story with the characters we prefer, in such a way as to unlock the areas restricted to certain skills, save the workers in danger or collect the golden bricks in the two islands and of course racing on vehicles, to which in LEGO Jurassic World are also added those in the form of Dinosaur. As an extra we find instead ten sick dinosaurs (to be treated using the various skills to collect the three required foods) and twenty photographic positions, which will give funny shots of some iconic areas of the saga. 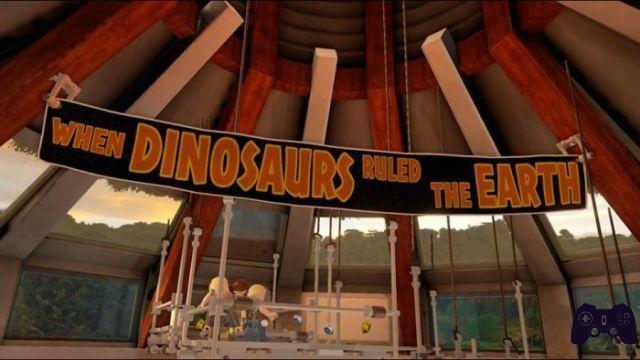 Nobody… move… a muscle!

If from the visual point of view LEGO Jurassic World it differs practically in no way from LEGO Batman 3: Gotham and Beyond, painstaking work was done under the sound side: in addition to the original soundtracks of the four films, English voices were used

for all the scenes of the first three chapters. Even during the game phases of Jurassic Park, the Lost World and Jurassic Park 3, existing dialogue lines have been folded even if there are big absentees such as the historian "Listen, are there expected to be seen dinosaurs in your Dinosaur Park?" but they still manage to retransmit the atmosphere of the titles on film. An even better job has been done for Jurassic World, which re-proposes the film's voice actors, including Andrea Mele (who voices Chris Pratt / Owen) both in the dialogue scenes of the film, and during the game phases with exclamations. completely unpublished and concerning what the player is about to do.

Verdict 7.5 / 10 Look, are there any dinosaurs expected to be seen in your Dinosaur Park? Commentary LEGO Jurassic World finally solves one of the major flaws of the latest LEGO games, dramatically improving the Free Play experience. Unfortunately on everything else it is ultimately less attractive than a LEGO Batman 3 or a LEGO City Undercover, but certainly a great buy for lovers of the saga inaugurated by Spielberg in 1993. If you want a LEGO game but don't like movies about Jurassic predators (and especially if you are among those who did not appreciate Jurassic World, which is the most cured and the best of the four in this brick version) focus on another title in the TTGames series, if on the contrary you have grown up on bread and dinosaurs, get on a gyrosphere and run to buy it. Pros and cons ✓ Original voices from the films
✓ Great for fans of the saga
✓ New successful free play system x Dull chasing levels
x Only suitable for fans of the saga
Do you want to be a video game expert and know all the tricks, guides and reviews for your video games ? Holygamerz.com is a group of video game fanatics who want to inform you about the best tricks, guides and tips. We offer you the best information to be a reference in gaming, so here you can find guides, tricks, secrets and tips so you can enjoy your games to the fullest. Are you ready to get all the achievements of that game that you resist so much? Enter now and enjoy your favorite video game to the fullest!
Beyond Eyes Review ❯