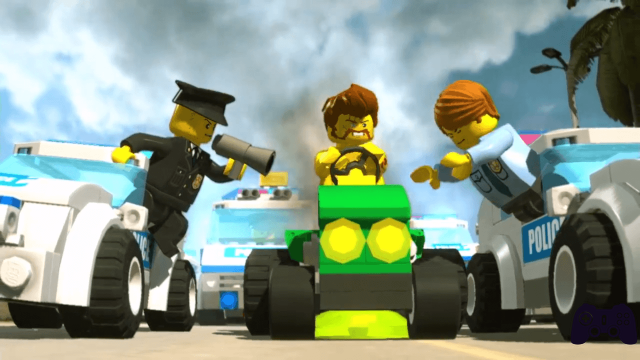 Last month Chase McCain bewitched the owners of Nintendo Wii U with what has been defined by myself as "one of the best LEGO titles ever" (review here), now less than a month later we are facing the second chapter of the adventures of Chase, a new adventure that arises as a prequel to the Wii U title and remains exclusive to Nintendo buyers, and in this case to 3DS owners.
In the hands of the TT Fusion, who usually take care of the portable versions of the TT Games parodies but who this time also collaborated in the home version, will succeed LEGO City Undercover: The Chase Begins to match his older brother? Or will it be yet another portable chapter of the easily forgettable LEGO brand?

A prequel without twists

The facts narrated in The Chase Begins happen two years before the Wii U title events. Chase, a novice agent, will have to make a name for himself by helping the citizens of LEGO City and will then become the legendary cop by infiltrating and destroying the most powerful gangs in the city from within.
We will meet many of the characters already seen in action last month, from the fearsome Rex Fury, whose meeting will mark a turning point in Chase's career, to the first exchange of glances with Natalia, who will instead revolutionize the love life of our hero. Even the settings are practically the same as in the home chapter, although in The Chase Begins we will not have separate main missions, but everything will take place in the game map, divided into seven "large" areas. In general, if you don't waste time with the inevitable collectibles, the title it can be finished in about six hours, a very short duration for the series due also to the very low level of challenge that The Chase Begins offers; if instead we want to complete it 100%, Chase's portable adventure will last us about twice as long, since once we have found all the main LEGO City costumes he will have no more secrets. Unfortunately, all the important facts for the story of The Chase Begins are narrated in the previous chapter, leaving the surprise only to those who have not yet played the title for home console.

Also in this portable chapter, Chase will be able to rely on his disguises, and on the skills they will give him, in order to bring the criminals on duty to justice. Although the order of obtaining is slightly different compared to the "major" chapter, the costumes are the same as well as almost all the skills provided to our policeman, we will therefore find the Thief disguise, which will allow us to open doors and skylights by quickly pressing A , or to break into a safe, using the 3DS touch screen; or with the Peasant costume we can use a chicken both as a hang glider (the so-called "Pollaplano") and to throw volleys of eggs at the enemies, and with the Firefighter costume we can save cats in difficulty and free our way from barred doors. Chase's disguises can be changed via the D-pad and you can switch from one costume to another at any time, as needed, at the touch of a button.
The rest of the gameplay is also similar to the home version: the Acrobatics points return, to which our Chase can attach, hang or hook through the faithful grapple gun to be able to collect collectibles or to chase scoundrels. In addition, the driving gameplay remains the same, although limited to 41 vehicles against the 110 vehicles available in the chapter for Wii U, still remaining difficult in the first minutes of the game, until you can get carried away with the curves of LEGO City. becoming expert drivers. Finally, even in The Chase Begins the gyroscope and the motion sensors of the console are used: if in the chapter for housewife we ​​find ourselves pointing the Gamepad perpendicular to the screen, in this prequel we will have to move our 3DS to scan the area in search of secrets and collectibles; if we do not have the desire or possibility to move, we can still use the analog stick, except for a minigame in particular where we will have to synchronize a transmitter to be able to hear what happens inside the room. Strange the choice of not allowing the use of analogue by TT Fusion, focusing on the gyroscope that in the game in question is calibrated in a very bad way, forcing us to move the console without a logical criterion until we find the exact point for the correct success of the minigame.

The Chase Begins retrieve the entire soundtrack of the Wii U chapter without adding any original tracks and memorable. In addition, even the voice actors, in the animated scenes, remain the same as the home title, but the good news on the technical side ends here: in fact there are very few dubbed scenes in "The Chase Begins" and most of the game runs with Spanish subtitles. on screen, without even a background music. A somewhat questionable choice that destroys the atmosphere of the game. The old LEGO titles were yes without dubbing but they managed to amuse with the expressions and in general the "acting" of the characters; these silent dialogues instead make The Chase Begins more emotionally empty than the “big brother” on Wii U or the rest of the LEGO titles.
From a graphic point of view The Chase Begin ”does not differ from the previous LEGO games of TT Fusion; every area we are going to visit is surrounded by a thick fog, useful to not load too many buildings and textures, but probably LEGO City is part of the Silent Hill district and we were not aware of it ...
The game camera remains fixed on Chase even if, if desired, we can switch to the free camera simply by keeping the stylus pressed on the touch-screen, which moves self-guided, without weighing on the player and fortunately without being a hindrance in the game phases. unlike the 3D effect that we will find ourselves using only in movies and when we build with SuperBricks: in the latter case the effect is very well done, showing piece by piece - even if speeded up - how to build a building or an important structure for the city (for example the super ramps or the harbor lighthouse).
The Chase Begins suffers from lengthy loading like the Wii U chapter, sometimes even more than necessary, which will make even the calmest player impatient; we are faced with a very limited title from a technical point of view with glaring flaws, including the intersection of the protagonist and his vehicles with non-player backgrounds and characters, something that rarely happens in the home chapter.

Comparing this prequel for 3DS with the original LEGO City Undercover for Wii U is necessary, above all to understand the quality of the two games and the substantial differences between them. After analyzing the technical characteristics of the portable version, we come to the qualitative ones, to those that therefore make it really different from the home counterpart: in The Chase Begins we will be able to use the Street Pass function of 3DS to exchange with other owners of the game bonus characters, vehicles or even the very rare red blocks capable of unlocking extras and tricks in the game itself, as per LEGO tradition. The other substantial difference between the two versions is the aforementioned lack of the main missions: in The Chase Begins all events will take place on the main map (although, as already mentioned, this is divided into several zones) against the great missions present in the Wii U chapter.
For the rest The Chase Begins appears to be a limited version and qualitatively inferior to the original Undercover, both for the contents, both for the collectibles and for the realization; while slightly superior to TT Fusion's previous portable parodies, it fails to make the qualitative leap made by the Wii U chapter instead.

Verdict 6.5 / 10 The past of the policeman we all already knew Comment The Chase Begins suffers the short-time exit from LEGO City Undercover, sinning with pride and failing to fully convince those who have played the home chapter. This prequel on 3DS is recommended for children and those who do not own a Wii U and, not planning the purchase soon, want to learn how to discover the world of Chase on their portable console even if, in these months full of titles to have absolutely for 3DS, LEGO City Undercover: The Chase Begins just can't carve out a space. Pros and cons ✓ Good 3D effect of SuperConstructions ...
✓ Nice to use the Street Pass x ... a little less the remaining 3D
x Plot already known to those who have played the Wii U chapter
x Not always faithful gyroscope
x Nervous loads
Do you want to be a video game expert and know all the tricks, guides and reviews for your video games ? Holygamerz.com is a group of video game fanatics who want to inform you about the best tricks, guides and tips. We offer you the best information to be a reference in gaming, so here you can find guides, tricks, secrets and tips so you can enjoy your games to the fullest. Are you ready to get all the achievements of that game that you resist so much? Enter now and enjoy your favorite video game to the fullest!
Phoenix Wright Review: Ace Attorney Trilogy ❯