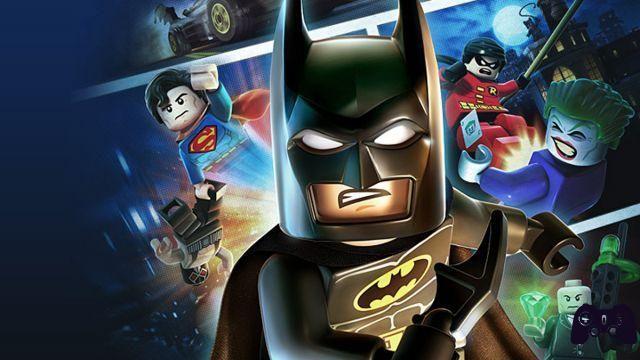 After four years and several video games under the LEGO brand, Traveller's Tales returns to the dark and twilight settings of the Dark Knight, bringing with it all the past experience. LEGO Batman 2: DC Super Heroes has nothing to envy to its younger brothers, such as LEGO Harry Potter, LEGO Star Wars or the various other cinematic reinterpretations created with the most famous building bricks in the world. In fact, the title based on the DC universe even seems to be a mixture of the gameplay and the best potential of the others and, with a massive roster of superheroes to manage, it could not be otherwise.
Both allies, supporting characters, main characters and antagonists, the number of playable characters and not present in LEGO Batman 2 is really able to delight fans of DC comics, and despite everything Traveller's Tales perfectly manages to keep the focus of the I play on the Caped Crusader and the Wonder Boy. Both Bruce Wayne and Dick Grayson, in their alter egos, will be indispensable to the completion of the game, although the acquisition of Superman as a playable character relatively early in the main story may seem, at first, a kind of game breaking.
If this little introduction has aroused some curiosity, know that we have only scratched the surface of one of the games which, both for the vastness of the areas and for the amount of content, is probably one of (if not the) most massive games made. by the development team.

We recently learned about Gotham City or some parts of it through titles such as Batman: Arkham Asylum and its sequel, Arkham City, but the one created by Traveller's Tales is a very different city and not only because it is made of bricks ... While retaining the atmosphere grim, typical of the events of a complex and dramatic character like Batman, the Gotham of DC Super Heroes is more a reference to the Silver Age of the comic: vast, completely explorable, yet not oppressive or particularly frenetic. A bit like the game itself, self-ironic and humorous, but never childish or stupid.
Of course, a lot is due to the mix of humor brought by the LEGO brand but far from thinking that what we have in our hands is a product for children, or something simple, made only with the purpose of laughter: in addition to the ironic moments (strangely, very few of which are related to the Joker, whose figure is more of a nuisance, at certain times, than a real opponent), there is also room for seriousness, for example with a comparison between a Batman sure of his abilities but still human, and a practically omnipotent Superman….

As already mentioned, Superman and the rest of the Justice League seem to be doing their best to obscure Batman from the lead scene. Clearly more versatile powers, characters almost completely invulnerable in combat, and greater speed and freedom of movement… All factors that heavily influence the choice of characters to interpret.
As soon as we are given the chance to get our hands on Superman, the temptation to spend the rest of the game as the Man of Steel is strong, also because the immediately following levels seem to be specially structured to highlight his skills. And finally lifting off the ground to launch into the skies with a sonic boom due to high speed, has never been so satisfying.
The music, based on the theme created by Danny Elfman for Tim Burton's films, which until then accompanied the twilight and generally gloomy atmospheres of the game, gives way to John Williams' glorious Superman theme, while the space is left for players to roam above the buildings, exploring all (or most of) Gotham City.
But it is the music itself that, abruptly, reminds us that it is not the events of Superman that interest us: despite the free time allowed between one mission and another, sooner or later we will be called to proceed with the story, and the theme of Batman , regardless of the character used or the position on the map, it will return to become predominant.
In fact, the story, regardless of how we decide to play it, is dedicated to the Dark Knight, and Traveller's Tale is perfectly aware of this in telling it. Even in terms of gameplay, to get most of the bonuses, both in the free game that will allow us to try again the various missions, and in the exploration of Gotham, the Dynamic Duo remains the main means to overcome obstacles. Both obtaining the golden blocks (essential to unlock extra characters), and collecting coins (equally essential to buy enemies and vehicles), is a task entrusted mainly to the forces of Batman and Robin, and which will test our skills in various routes ...

… Or rather, this is what we would have said if there had really been a challenge, beyond completeness.
Of course, in itself finding the various golden blocks, the portals from which to buy characters and the red blocks (with which to unlock the various cheats), could be considered a challenge, but the series of "obstacle courses" prepared by Traveller's Tale is long the way that leads to every single brick looks more like a sort of endurance race. How long will we be able to hold out before giving in to the next mission? Exploring can be fun, of course, especially once you have acquired the ability to fly freely within the map, but as for the Batman and Robin paths, it is mostly a sequence of actions, jumps and costume changes. which becomes monotonous after a short time. Very little is left to the player's intuition, and both skill and equipment needed to overcome obstacles are always within reach, and are learned practically within the first two missions.
Therefore, if completing the first 20% dedicated to the game "on rails" of the story takes time, the remaining 70% is practically repeating the simple sequence of actions learned initially over and over again. And more often than not, the not particularly precise controls contribute to adding frustration to the thing, especially in flight sessions (during which it is often impossible to find the right speed to move, with too sudden accelerations or sudden changes of direction due to collisions. with the invisible walls that delimit the various areas).
Fortunately, the monotonous aspect is mitigated by the possibility of facing situations with different characters, experimenting with the various powers that we will not initially have or of which we will be limited in use due to the interchangeable costumes of Batman.

What Traveller's Tales lacks in fantasy and level design, however, is recovered from an excellent characterization of the characters, especially thanks to the use for the first time of the full dubbing.
From the madness of the Joker, to Batman's hoarse voice (offset by a much more mellow one as Bruce Wayne), from the confidence in Superman's vocal timbre and movements to Robin's quick and acrobatic attack sequences, everything is designed to immerse the novice player in the DC universe, while for those who are already fans of printed publications it clearly contributes to making the gaming experience pleasant and engaging.
As already mentioned, the music is an important aspect, which goes far beyond the mere accompanying background, and is used to signal the main changes and important moments in the game, almost always managing to be an added involvement.
Going back to the example of free flight, many will probably find themselves whistling the Superman theme, darting at high speed between buildings, or pointing upwards for the simple pleasure of seeing the city shrink beneath them and launch into a spectacular dive.

Verdict 8.5 / 10 Flight like Superman. Plano like Batman. I stay on the bench like the rest of the Justice League Comment Ultimately, Lego Batman 2: DC Super Heroes is a game that manages to capture and, despite still having room for improvement, the mechanics now tested by Traveller's Tales are so immediate and intuitive to allow anyone to immerse themselves in history. Indeed, even better: to immerse yourself in the soul of the game since the story itself is only a small, tiny part of what is the immense setting in which to get lost, passing from one superhero to another. Pros and cons ✓ Optimal characterization of the characters
✓ Considerable freedom of exploration
✓ Massive longevity
✓ Intuitive and proven mechanics
✓ Engaging soundtrack and an integral part of the gameplay x Monotonous side missions
x Frustrating and inaccurate flight controls
Do you want to be a video game expert and know all the tricks, guides and reviews for your video games ? Holygamerz.com is a group of video game fanatics who want to inform you about the best tricks, guides and tips. We offer you the best information to be a reference in gaming, so here you can find guides, tricks, secrets and tips so you can enjoy your games to the fullest. Are you ready to get all the achievements of that game that you resist so much? Enter now and enjoy your favorite video game to the fullest!
News Crypt of the NecroDancer meets The Legend of Zelda: Cadence of Hyrule announced ❯