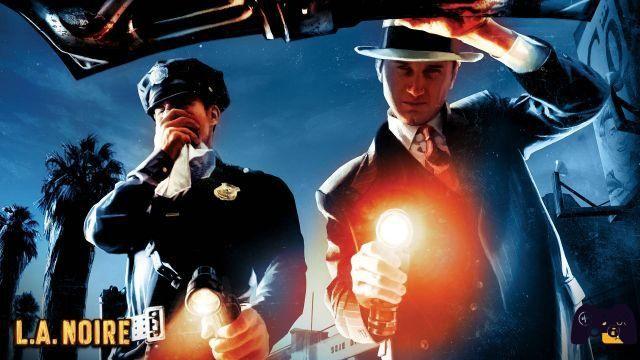 Smell of tobacco. The sound of Bourbon poured into glasses, live improvised jazz, double basses, percussion, trumpets and piano in an orgy of persuasive sounds that spreads like a perfume among the chatter of the customers. Gentlemen in suits, elegant and distinguished regardless of what is hidden in their soul, the respectability of post-war America at its maximum splendor. Gangsters, detectives, dream-eyed aspiring actresses, cattle-eyed producers looking for yet another prey, all under one roof. A glimpse of Los Angeles life, between speculation and the golden age of Hollywood, the first cry of the American dream that materialized after the victory against the axis, when everything seemed perfect and the rottenness was hidden under a carpet made of cars, work and terraced houses in the suburbs by brochures, lawns and pastel colors. No one in their right mind would ever have the courage to dig into the murky, without being content with doing the "homework" and yielding to the thousand tempting demons of the West Coast, of LA noire. None except Cole Phelps.

Team Bondi's work is a socio-economic tale that has its roots in the post-war cauldron in which the USA boiled ...

LA Noire, today as in 2011, it's a masterpiece. Seven years of development that marked the fate of Team Bondi, tied hand in glove to a project that is too ambitious, perhaps unfortunate, for which they were born and "died", drowned in debts like those who are rejected by the city of angels drown in alcohol. Rockstar's support was of little use, if not to finance a project that was one of the milestones of an entire generation and which today returns to 1080p (4K on PS4 Pro and Xbox One X) including the five DLCs accompanying documents issued at the time. Little indispensable stuff, which had to be said and immediately removed from the speech. The greatness of this title is to be found beyond the appearances of a lazy remastered seasoned by the increase in resolution. Los Angeles in 1947 is alive, recreated with obsessive care thanks to the material of the time, photos, maps, anecdotes. Citizens walk as if on a high fashion catwalk, showing off impeccable clothes and perfect hairstyles, movements and chatter, savoring that "freedom" on everyone's lips, emancipated and masters of their own destiny. Every corner of the city is a riot of flamboyant advertisements from vintage slogans, logos, Masonic symbolisms and racial disputes, cars of eternal class, from the most popular working class Fords and Packards, to the squeaky police cars to the exclusive Cadillac V16 Convertible; the streets look like an open-air museum while the car radio now broadcasts swing, now a serial drama. Central, Chinatown, the Hollywood of when the suffix "land" still stood out in the hills, trams and residential areas divided into bare lots in the height of building hysteria. An educational and cultural free-roaming, bewitching and enveloping, absolutely declined to the needs of the player, who can decide to walk around LA on foot and aimlessly like having his partner drive, cutting travel times and concentrating totally on investigations. 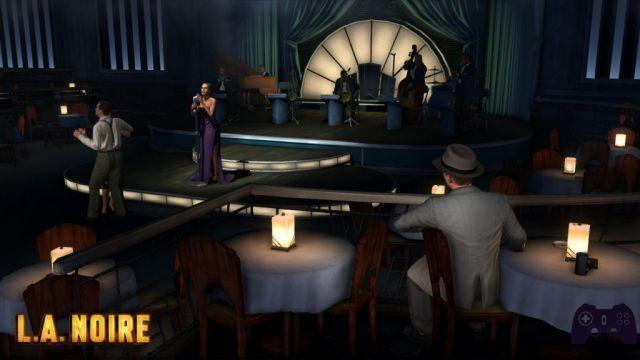 They are the fulcrum, the ultimate meaning of this title fueled by the desire to feel inside a James Ellroy book, investigating notebook in hand, interrogating suspects and witnesses, based only on one's intuition in an era in which modern forensic analyzes were pure science fiction. LA Noire, however, does not want to tell its story through literary or cinematographic techniques, rather, he wants to do it in the most human and natural way possible. You play a man, a policeman, a fundamentally common husband, with his own morals, ideas and humor, to identify with, to become attached to thanks to an irresistible way of being. A protagonist surrounded by many other unforgettable people in their normality, each with its own background and a unique charm, enhanced by a MotionScan still splendid to see, from which dreams, obsessions, psychosis, truth or lies shine through. Dozens of actors in flesh and blood for an exciting virtual interpretation perfectly integrated with the playful fabric, as we will see. Each character always has something to say, some particularity, a tic, a way of interacting with us, from the extras to the key characters, such as the jazz singer Elsa Lichtmann, the former comrade Jack Kelso and the ambiguous doctor Harlan Fontaine, trapped in a plot that is lost in the memories of the Second World War that return to haunt the present. This is the magic that permeates an experience that does not want you to experience epicness concentrated on paper or film, it simply wants to make you live, in an era that we have inevitably lost. A joie de vivre that passes from both the human and environmental aspects. Bars, clubs, restaurants, police stations and film studios, apartments, villas and parks, government and public buildings, all show off the architectural canons of the time, of which examples are still found throughout the States today. In each of these places you can hear sounds, voices, you see different habits for every hour of the day, people who work or have fun, mechanics polishing a car outside a dealership and bartenders preparing cocktails, one even thinks of hearing their smells that permeate the air. It seems to have lived in this Los Angeles, paved with broken and fulfilled dreams, broken or contemptuous lives against the backdrop of a cannibal film industry, capable of enchanting as well as killing. The fate of Elizabeth Short, the "Black Dahlia", sadly true story repeatedly fictionalized that returns here indirectly once you enter the "homicides", to investigate a new series of brutal killers. Games of power, corruption, drugs and the mafia, wrapped in post-war euphoria. Lead America, gold plated.

It hurts the pen more than a Colt

A scenario in which crime can only flourish, creating for the city plays called crime scenes. These metropolitan stages show an almost ecclesiastical, ritual setting, designed to instill doubt in the player's mind, make him think like a detective, in a gameplay of dynamic graphic adventure where there will be no visual cues to indicate interactions but only auditory, in the form of delicate piano notes near points of interest. A musical parallel that continues with the background, double bass notes between romanticism and tension, curious, interrogative, as if to ask the player "what are you thinking?". A vinyl that will stop playing only when we have collected every main clue and solved environmental puzzles, leaving the player's nose with the opportunity to go out of the way and find optional ones while chatting with their partner. These deviations lead to a whole series of variables (limited to the case in question) that blend with what makes the gameplay so special, namely the interrogations. Read the superb facial expression of the interlocutors, interpret their words and decide whether they tell the truth or lie, indulging them, forcing them or denying them by presenting a Phoenix Wright-style proof, providentially marked on our notebook (high-class Western interpretation of the Capcom cult series).

Situations where the player has total control and will, the outcome of the investigation will depend on, leading us to unravel the skein quickly or making us do a few more circles in LA, changing the order of places to visit and people to meet, up to chasing and arresting a fugitive or arriving at the stall with a hostage in the way. A constant and masterful balancing act between freedom and story driven in which chases (on foot or by car), fights and shootings are a mere tinsel of the atmosphere, which will even be possible to skip in the rare case that you find yourself stranded in one of these sections. Tinsel with all the trappings, however, useful for moving the reasoned and suggestive rhythm and giving a fundamental touch of “hardboiled” color, without ever exceeding in easy “Hollywood” spectacularization.

The gameplay is declined to the reality of the investigative rhythms of the time, making us savor every detail of this long career.

A game that favors those who walk, those who love to think and observe every detail, thanks to a technical sector that is still very valuable today, tailored like the suits by Phelps, enhanced by the zooms that show an absolutely contemporary level of detail that would have deserved to shoot at sixty frames per second at least in this iteration . There would be a lot to tell to those who didn't have the pleasure of playing it six years ago, memorable cases, touching scenes and exceptional dialogues at every single line (2.200 pages of vintage script), a human videogame in a videogame scene that seeks more and more. the carnal understanding with cinema, adding fiction to fiction. A unique title in the panorama, which shows some wrinkles in a dull color palette but still suitable for the context (with the possibility of desaturating everything in black and white, splendid), in a too light drive (and the cars of the time were tanks) and in shootings from mechanics sketched as long as they are effective. Overwhelming proof that masterpieces never get old, become "vintage".

Verdict 9/10 A city where a man's home is his castle. Comment LA Noire is a game that from the first start bewitches the player with its smoky charm, full-bodied and soft like a good whiskey. Immortal like the era that inspired it, winning thanks to the atmosphere of a city recreated in a maniacal way, both in the aesthetics and in the behavior of those who live there, experiencing everything through the eyes of a detective with an exceptional charisma in his human normality. . It is a dynamic graphic adventure disguised as free roaming where the human side of the cast (in flesh and blood) plays a fundamental role, both in the gameplay and in the general involvement, thanks to MotionScan and a masterful script, mirror of the era it wants to simulate . A title that rewards those who want to immerse themselves in its atmosphere, get carried away and understand how special the legacy of Team Bondi is. Pros and cons ✓ Enveloping atmosphere
✓ THE '40s real and alive
✓ Masterful and "human" interpretation
✓ Ecstatic sound sector x Shootings and chases to give color and little more
Do you want to be a video game expert and know all the tricks, guides and reviews for your video games ? Holygamerz.com is a group of video game fanatics who want to inform you about the best tricks, guides and tips. We offer you the best information to be a reference in gaming, so here you can find guides, tricks, secrets and tips so you can enjoy your games to the fullest. Are you ready to get all the achievements of that game that you resist so much? Enter now and enjoy your favorite video game to the fullest!
Gunman Clive HD Collection Review ❯