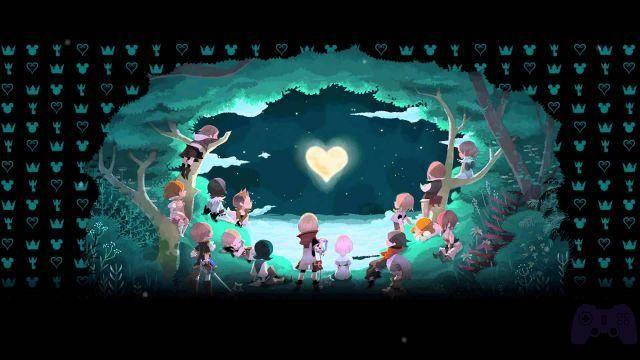 Available from June 16th in Europe, after the American release on April 7th, Kingdom Hearts Unchained χ (Chi) it can be downloaded for free on both android and iOS devices. The title is a prequel to the Kingdom Hearts saga, and looks like an RPG Free to Play with micro-transactions, after more than two months of playing daily, facing quests and special events.

As anticipated in the introduction, the review is based on the American version of Kingdom Hearts Unchained χ (Chi), which we have been playing daily for more than 70 days. We have faced over 250 story missions, and participated in several dedicated themed events including Zootropolis, Alice in Wonderland, Snow White and finally the one still in progress for Kingdom Hearts: Dream Drop Distance. To date we have only used in-game currency and have never felt the need to purchase extra gems via micro-transactions.

Kingdom Hearts Unchained χ (Chi) is chronologically set before any event seen in the last twenty years in the Kingdom Hearts saga, and broadly tells how the world (or worlds) succumbed to darkness and how it came to the Keyblade war. Broadly speaking precisely, because in Unchained χ the story is pitted very slowly, through super deformed cutscenes and diluted between the various missions of the story. The first excerpts of the plot in continuity are found around mission 80, and then leave room for many small subplots set for the most famous Disney worlds present in the main series (including Agrabah, the forest of Biancaneva, Olympus and the land of Wonders). There is obviously no shortage of Disney characters and Square Enix, which in addition to populating the mission environments will be the absolute protagonists of the gameplay. For those who don't want to discover happenings so slowly, they will find the key parts of Unchained χ within the Theathre mode of Kingdom Hearts HD 2.8, due out later this year for PlayStation 4.

Each month, a total of fifty new quests will be released (currently over 300), guaranteeing ad Unchained χ long-lasting coverage and many things to do over the long term. The slowness of the

plot is partly justified by the mobile nature of the title, suitable for short games and even more full-bodied ones, thanks to a very advantageous Stamina recharge system for the player. To counter the need for always online, which forces you to exploit Unchained χ only in the home. At the first start, the player will be asked to choose a faction of belonging (Foxes, Unicorns, Bears, Jaguars and Cobras) and every Monday a prize ranking will be drawn up in which the team that has collected the most will win. Luxury (experience points), within each faction it is possible to find numerous guilds or create a personal one, with which to chat through the appropriate sub-menu or to ask for help during the Raid Bosses (which we will talk about shortly); guilds will also have a prize ranking based on the Lux collected weekly. 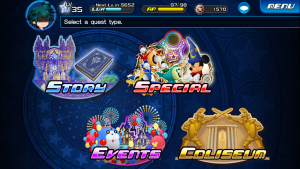 Five medals to tame them

If the story of Unchained χ shows some uncertainty, it is under the playful aspect that the game shines. We have already mentioned how Unchained χ is structured for short and / or full-bodied games, immediately guaranteeing a sort of addiction (also due to the launch promotion with Stamina reduced to 1 for all missions). The core of the mechanics are medals depicting Heroes and Villains from the world of Kingdom Hearts, and can be placed on the appropriate Keyblades obtainable by continuing in the story. With a combat system that draws the cards of Chain of Memories, the player will have to choose whether to attack the Heartless on the screen only by touching them or by swiping the finger on the medal, thus activating the special ability, causing more damage or alterations of status.

Repetitiveness of the gameplay when taken in large doses

The main objective of each level is to defeat the boss, optionally respecting three specific requests even in separate attempts ranging from defeating all the heartless in one turn, collecting a certain number of Luxs, using a specific keyblade and so on. The difficulty of the fights is progressive, and as the story progresses the enemies will use status bonuses or will be more tough, forcing the player to upgrade their medals to inflict more damage and pass the level. Taken in large doses (again due to the 1 stamina to celebrate the European launch) Unchained χ it is much more repetitive, showing the side on the other weakness of the game, fortunately after quest 134, you will also have access to the last category of missions, those dedicated to the Olympus Tournament and going to close the offer of the mobile title. If the purpose of each mission remains the same, each category allows a different approach and a different final outcome: for example Olympus will put the player in front of challenges of increasing difficulty (divided into ten different tiers) which if overcome will reward him. with exclusive evolutionary medals able to give a boost to your Keyblade, favoring the progress of the game. Not only that, to slightly break the monotony we find daily quests, which will give specific materials not obtainable during the story missions and the Raid Bosses, huge heartless giants that will be strengthened every time they are defeated, requiring, at the highest levels (or in the forms more powerful), the intervention of your guild with group attacks. 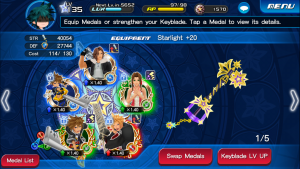 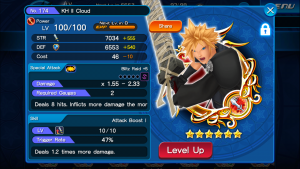 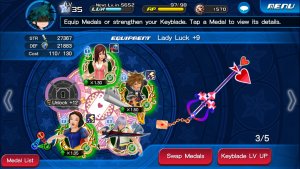 To upgrade medals and Keyblades it is therefore necessary to play daily ad Unchained χ completing the necessary quests from time to time, and unlocking new costumes for the avatar every few levels. The costumes are the other pillar of this chapter of Kingdom Hearts: once you have obtained the relative board, in fact, you will have to use the Avatar Coins (rewards for leveling up or for completing quest requests) to unlock the nodes of the path and get, in addition to the outfit, also cost points for your own Keyblade (needed to equip more powerful medals), HP to increase your health points, and AP to increase the available Stamina. In addition, in the paid costumes (obtainable by exchanging the game currency) special medals will also be given both for one's own team (such as those of Zootropolis), and aimed at enhancing those already in possession by giving it a secondary power (ranging from a trivial increase in attack, to inflict status changes on opponents). 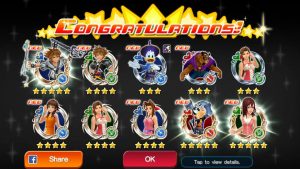 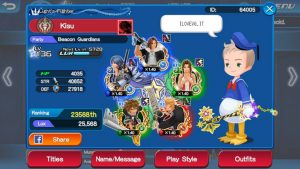 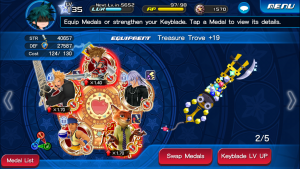 And we come to the age-old question that pervades every Free to Play on the mobile market, the weight of microtransactions. Unchained χ is a gatcha-GDR, to get powerful medals it will be necessary to try your luck in the game shop, with shots ranging from a single medal to ten (or more in case of bonus events), fortunately the title of Square Enix provides, especially at the beginning, enough gems not to require a necessary use of real money. In fact, every five missions of the story, you will be rewarded by 150 gems, while 30 will be given to you the first time you complete each of the missions present in Events and Specials; with the daily login you can get up to 500 gems a

week, and by accumulating them, you can make the necessary launches to strengthen your team, or buy event costumes to obtain exclusive materials. If you feel the need to spend your salary, Unchained χ offers an advantageous pack of 3000 gems at around 15 euros, that in addition to giving you the currency allows you to have access for a week (which always ends on the following Sunday, so if you buy it on Monday) to all the special missions for materials and evolve, regardless of day. even by those who do not want to lose a single euro, thanks to non-invasive micro-transactions, although the gems are requested in disproportionate quantities (100 per use) to expand their box, and thus bring more medals, or to continue after a KO, the player decides how to use their resources.

Finally, it is necessary to spend a few words on the technical and sound side of Unchained χ, which on our S4 is fluid and without slowdowns whatsoever, although it occupies a large part of the phone's memory (at the moment 1,2 giga dedicated) the character design and the entire 2D structure of the environments is guessed and the menus are easily understood and functional. In the background we find the most famous songs of the series and easily recognizable by lovers of the Square Enix saga. The title is in English only but is easily understood even by those who do not chew the Anglo-Saxon language.

Verdict Yes The prologue of the prologue of the prologue ... Comment Kingdom Hearts Unchained χ (Chi) is a good free to play title that has addictive mechanics and non-invasive microtransactions, it is suitable for daily hit and run games and offers a increasing challenge as you progress through the game. Unfortunately it offers the side on a too slow plot of which the ending is not visible, and on the extreme repetitiveness of the background if taken in large doses. Continuous support and shared servers make Unchained χ always full of new content and medals to be obtained as long as you dedicate the right time and resources to it. Pros and cons ✓ Character Design guessed it
✓ Non-invasive microtransactions
✓ Curve of increasing difficulty
✓ Great soundtrack x Too slow plot
x It may be repetitive
Do you want to be a video game expert and know all the tricks, guides and reviews for your video games ? Holygamerz.com is a group of video game fanatics who want to inform you about the best tricks, guides and tips. We offer you the best information to be a reference in gaming, so here you can find guides, tricks, secrets and tips so you can enjoy your games to the fullest. Are you ready to get all the achievements of that game that you resist so much? Enter now and enjoy your favorite video game to the fullest!
Review Atelier Sophie: The Alchemist of the Mysterious Book ❯