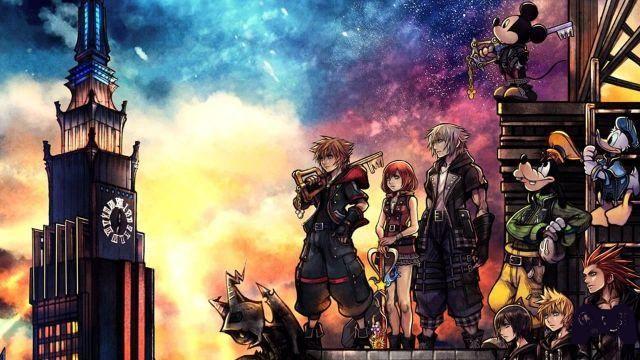 You haven't been waiting for it for 13 years.

I'm sorry to start immediately with the controversy but, once you get to the end credits of Kingdom Hearts III, and viewing the epilogue, it is clear how the series of Tetsuya Nomura lay its foundations on every chapter released. Even those considered wrongly spin off. Why Kingdom Hearts III takes stock of the Xehanort storyline, and getting there having played only the two numbered chapters is the biggest mistake you can make. It is not even enough to play only the two collections (although it is better) but you must also have a strong knowledge of the events of Union X, the chapter for mobile phones. The risk? Find yourself as in the days of Chain of Memories, with characters that jumped out in the second chapter without the necessary introductions. Of course now there is no longer even the problem of consoles, since all the chapters are recoverable on the Sony flagship.

In any case, after a development of six years (one of which was lost due to the transition to Unreal Engine 4) the epic of Sora comes to an end, a journey between the Disney worlds that instead lasted seventeen and that covered three generations of consoles. A final journey undermined by leaks, thefts, and the inevitable breakdowns of day one. January 29 has finally arrived, the game is available and I'm ready to tell you mine.

'Slast time, for now, alongside Sora.

The conclusion of an adventure that began 17 years ago. Of which all the stages are important and fundamental for the full understanding of Kingdom Hearts III.

The journey picks up exactly where we left off at the end of 2.8 two years ago. Sora must recover the Awakening Power, while Riku and Mickey must free Aqua from the Realm of Darkness. All to gather the seven Guardians of the Light to face the New Organization XIII. One of the strengths of the series has always been how seemingly trivial topics such as friendship and light versus darkness, were treated with the right weight, managing to emotionally involve the player. Making him fond of the characters and the game world born from that agreement taken in an elevator between Square and Disney.

From this point of view, Kingdom Hearts III does not disappoint.

Nomura has repeatedly promised that he would close the Xehanort storyline with this chapter. So it was, and when you reach the end credits you have most of the answers you are looking for. A couple of them remain open, unrelated to the scholar of darkness but new avenues for the next stories, if any, in the world of Kingdom Hearts. A world that now stands on its legs, and on the strength of Disney films that have become a mere outline of the main events. The cast of the other chapters reunites under the same banner, ready to help or face Sora in one last battle, none excluded. All characters in the cast have their moment, closing where required, their own goals and outstanding issues.

To fully appreciate Kingdom Hearts III you need to be at least aware of everything that has happened in these seventeen years. No, it is not ideal to skip a single chapter, however useless you may consider it, because one way or another it will be linked and pulled out. Having diluted the saga over the years is perhaps the most serious flaw to hit this third chapter. Making him unable to be appreciated  by the masses without a mandatory background. Consequently, however, those who in recent years have followed the saga in every minimum output, will find a complete work capable of really closing many doubts and uncertainties. The time devoted to the other chapters will bear fruit in the work done by the Nomura team. 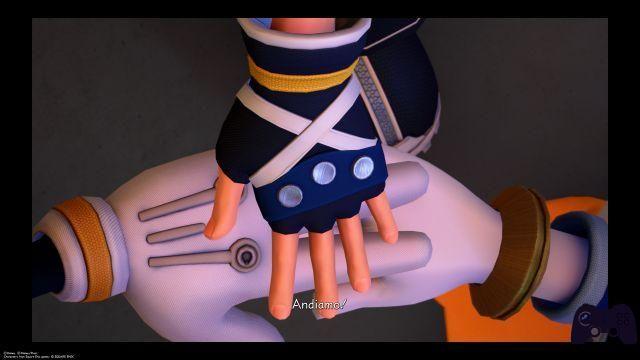 As per tradition for the series, Sora's adventure unfolds through the worlds of Disney films and for the first time ever even in Pixar ones. Always as usual, except in rare cases, the process of the new world more or less follows the plot of the reference film, but putting Sora, Donald and Goofy in the middle of the action. The exceptions instead deal with events positioned chronologically after the Disney products, expanding the plots already seen and offering some new ideas. Between one world and another, however, the main plot will continue, and the missions of Sora e Riku will alternate on the plan of Xehanort, giving us the spark and the desire to continue exploring. 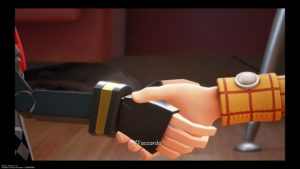 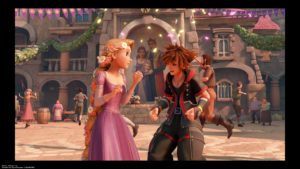 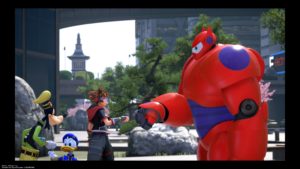 It is only after completing all the Disney / Pixar worlds that Sora's latest adventure comes to life. This could become a defect for some, were it not that over the course of the seventeen years Kingdom Hearts has rarely accustomed us otherwise. Worlds have always been a ploy to teach Sora, to get him prepared for the final conflict, be it Heartless, Nobody, Maleficent or whatever. sure maybe the finale didn't have to be concentrated in six hours, but even in that short time there will be moments of impact and unforgettable. 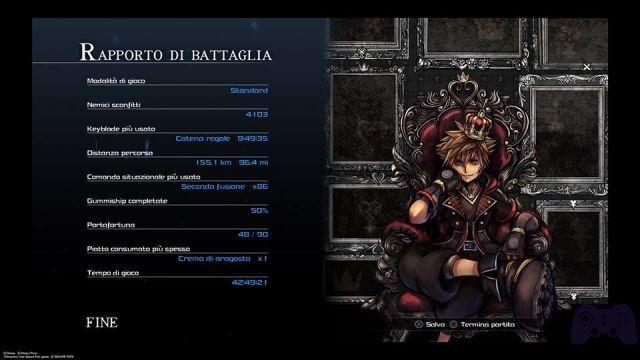 The strong point of Kingdom Hearts III, however, is definitely the gameplay. Nomura's team concentrated all that was good in Dream Drop Distance and improved it, also going to file the few defects of the Fluimoto. By pressing the accelerator on both the variety of moves and the diversity between one Keyblade and another, every fight is a feast for the eyes. Cinematic despite the few keys to press, Kingdom Hearts III kidnaps more every time Sora learns a new skill.

Kingdom Hearts III is undoubtedly the most fun chapter of the series to play.

For the first time, the Keyblades will change shape after inflicting damage on the enemy, from those that become Frisbees or shields, to spears, to a very strong hammer or fearsome yo-yos, Sora's arsenal this time is vast and, I want to repeat it once again, fun to use. According to the record, depending on the similarity of the type of weapon, some animations of Sora are the same, but everything is transformed into the Epilogues or the second form of the weapons (where available).
Changes also in the evocations: in addition to the classic spirits of historical characters, the attractions peep out, of which we already had a taste in the demos we tested last year.

After the game was over, this new power of Sora felt decidedly off the scale, making the fights much easier than expected. Certainly from a scenic and graphic point of view they are among the most successful aspects, but they could undermine the fun of those looking for a constant challenge from the game. It is precisely the difficulty to be affected for the duration of Kingdom Hearts III, compared to the past, the Standard mode (Normal) has been further facilitated. Even through fault or thanks to a much improved AI and no longer an obstacle as in the past. 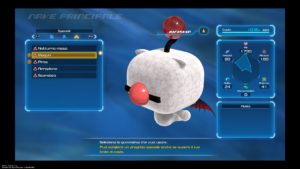 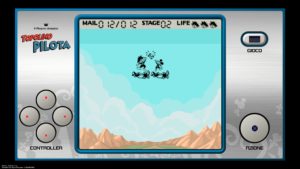 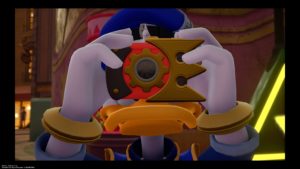 What is there to do beyond the main storyline in Kingdom Hearts III?

Between a completely rethought Gummiship (for the better) and capable of giving you hours of space exploration mixed with shoot 'em up, and the classic mini-games to which the series has accustomed us (including the Corona dance above all), they find space even new additions, such as the ability to cook dishes with Remy (and get temporary upgrades) or the games of the classic kingdom, a dip in the world of Game & Watch in a Disney sauce.

The secondary objective to be completed as soon as possible, however, is certainly to look for the Lucky Charms in every world, because once we have collected enough of them in addition to receiving rare materials, we will be able to access the secret ending (available from today 31 January). Mickey mouse symbols that hide in the most unthinkable places, and that we will have to photograph with the very useful Gummofono (the new house of the Grillario). The latter will also allow us to take Selfies with other characters, or in the most disparate places, and share them immediately on social networks. One of the strong points of the game, thanks to the beauty of each world explored by Sora. 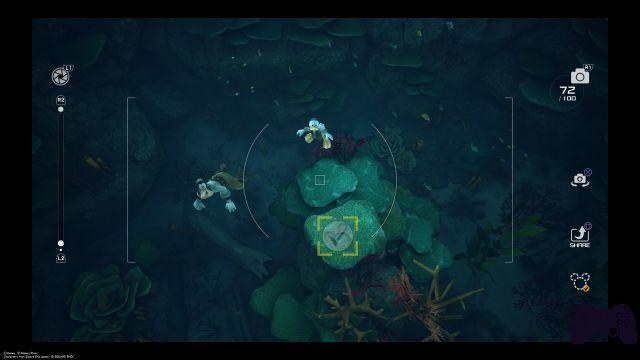 It is precisely in the worlds that Kingdom Hearts III shows the muscles of the Unreal Engine 4. On PlayStation 4 Pro the title is fluid and incomparable to the previous ones, for the amount of both mobile and fixed screen elements. Once in the Caribbean, then, it is really hard to distinguish the game from the film, a truly masterful work, which will elevate Kingdom Hearts III among the most beautiful titles to see of the generation. Of course the environments are mostly external, but you have the feeling that every world must give the best to the Disney or Pixar movie fan by always offering him a unique and dedicated mechanic.

The criticisms of the past few weeks that have called it subdued compared to the past, probably come from someone who has no ears or who has played the title on PlayStation 4 Standard, where the fan noise covers any other sound.

Verdict 9/10 Let your heart show you the way Comment After a heart-to-heart wait, Kingdom Hearts III is finally available. Sora's latest adventure closes the Xehanort arc and almost all the plots put on hold for seventeen years, opening new avenues for the future. A game that takes its time to get to the final stages, but which gives emotions to those who have spent almost twenty years of their lives alongside Keyblade wearers. Visually exceptional, each Disney / Pixar world is made like never before in a video game, while on the gameplay front, despite the lower difficulty than in the past, Kingdom Hearts III is the title of the most fun to play and scenographic saga. Many secondary activities, multiple contents, a title made for fans of the series and that will hardly disappoint expectations. The adventure could very well end like this, but never say never about the future of Sora and his companions. Pros and cons ✓ Visually gorgeous
✓ The best mechanics of the series
✓ Worthy closing of the Xehanort saga
✓ Fun to play and explore x Not suitable for new users
x Easier than in the past
x Haste final stages
Do you want to be a video game expert and know all the tricks, guides and reviews for your video games ? Holygamerz.com is a group of video game fanatics who want to inform you about the best tricks, guides and tips. We offer you the best information to be a reference in gaming, so here you can find guides, tricks, secrets and tips so you can enjoy your games to the fullest. Are you ready to get all the achievements of that game that you resist so much? Enter now and enjoy your favorite video game to the fullest!
News Sekiro: Shadows Die Twice, the origins of the story ❯