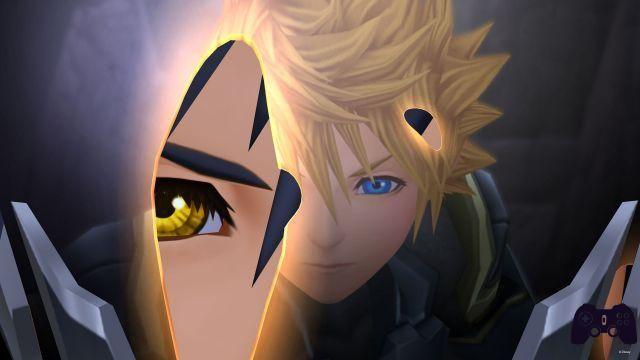 About a year has passed since the release of the first high definition collection dedicated to the world of Kingdom Hearts. Available from December 5th, fans will now also be able to put their hand to the second chapter of the collection, entitled Kingdom Hearts HD 2.5 ReMIX, containing Kingdom Hearts II Final MIX +, Kingdom Hearts Birth by Sleep Final MIX and Kingdom Hearts Re: Coded. But let's analyze together in detail the various contents proposed.

In the continuation of the review, there will be no information relating to Kingdom Hearts Re: Coded, as it is already present in our archive. We therefore invite you to read our review here.
NB: In the version contained in the collection there will be only high definition videos and summaries useful to explain the events. Consequently, there will be NO parts played, as happened with Kingdom Hearts 358/2 Days in the first Collection.

The events narrated in Kingdom Hearts HD 2.5 ReMIX they will continue the story left in abeyance by the first collection. In Kingdom Hearts II Final MIX + we will see the awakening of Sora and his friends who will be called to fight a new threat, the Nobody and Organization XIII. The latter is also willing to conquer "Kingdom Hearts" and it will be up to Sora and his companions to prevent it. Traveling once again to various worlds, some of which are new and others are already known, the player will make the acquaintance of characters such as Diz, Roxas and Naminé. Regarding Kingdom Hearts Birth by Sleep Final MIXInstead, the focus moves back several years to tell of Terra, Aqua and Ventus, three masters of the keyblade whose story explains the origins of that of the entire saga.


The plot of each chapter reveals new secrets

These three characters, in search of Master Xehanort, will be the protagonists of a continuous clash between light and darkness. Throughout the story, divided into three sections (each for character) plus the epilogue, you will meet numerous characters who will explain many points left open by the two main chapters.

The Keyblade hero is back

As for the game mechanics of Kingdom Hearts 2 Final MIX +,

nothing has changed compared to the PlayStation 2 version. The game system, already functional at the time, has not been touched in the least (contrary to what happened with Kingdom Hearts Final MIX HD), guaranteeing an experience very similar to the original. The advantage, however, is characterized by the presence of the Final MIX + version, never arrived and which now finally offers all its additional contents. What we are talking about is a series of unpublished material that includes new videos (useful to better understand the plot of the game), weapons, worlds, bosses and much more, in an adventure to be discovered again. And not only that: if at the time many had complained about the excessive ease of the title, now they will have to change their mind. Enemies are much tougher than in the past (although on Normal difficulty they still do little damage), forcing the player to stay focused all the time. Concluding this paragraph, even after years the gameplay remains solid and still captivating, also thanks to the presence of faster loading between the various "events".


The power of the χ-Blade

Kingdom Hearts Birth by Sleep was originally released on PlayStation Portable. In this remastering on PlayStation 3 it was therefore necessary to adapt the controls to the new console and to the DualShock 3. The overall work is much more than excellent, making the gaming experience that was already of the highest level on the Sony laptop absolutely perfect.

The visual control has been moved to the right analog, while it is possible to change the actions of your command menu via the L2 and R2 backbones. Added to this is also better control of movements thanks to the left analog of the DualShock 3 (compared to that of PSP). The speech already made for KH2 remains valid, with loading phases that in general will be faster and (fortunately) it will no longer be necessary to perform the substantial installation of game data to improve the overall experience. Also of Birth by Sleep the Final MIX version has been added, always unpublished in Europe (even if a patched version in Spanish has always been circulating on the net, ed) which introduces a series of novelties. The new content is to a much lesser extent and seems to cover, in most cases, the shortcomings of the original Japanese version of the game. However, the new optional bosses should certainly be mentioned, of which one could be compared, for the difficulty, to the Persistent Earth Feeling present in Kingdom Hearts 2 Final MIX +. In bringing this chapter to PlayStation 3, a modification was made to the Arena, which made the happiness of many since it allowed to play in multiplayer. Here this will no longer be possible in any way, undermining from this point of view the experience that the original chapter of the game offered. Despite this lack, however, Kingdom Hearts HD 2.5 ReMIX still offers a unique opportunity to play Birth by Sleep in the best possible way.

Kingdom Hearts as you've never seen it before

The remastering work done is undoubtedly among the best to have landed on PlayStation 3.

among the best remastering works

on ps3 The new aspect with which Kingdom Hearts 2 and especially Kingdom Hearts Birth by Sleep are shown will leave everyone speechless. The game enjoys a 1080p resolution, with high definition textures and completely redefined polygonal models, dramatically improving the visual experience of each chapter present therein. All this goes to smooth out those defects found in the first collection, which saw a Sora and his companions with decidedly inexpressive faces. And if this is still not enough, the entire soundtrack of the various Kingdom Hearts present contributes to making the technical sector practically perfect. The music that already made its way into many hearts at the time returns again with the same goal, further enriching an experience that in itself is already of the highest level.

Verdict 9/10 Birth By Sleep on PS3 is Jesus with Our Lady and All Saints Comment Kingdom Hearts HD 2.5 ReMIX is an opportunity not to be missed. Those who are having the pleasure of discovering this saga thanks to these collections will be pleasantly surprised to admire the work done from every point of view. Those who already know these chapters should take advantage of them to play the Final MIX versions with their additional content. Not to mention that Birth by Sleep on PS3 is an unmissable masterpiece for anything in the world. Pros and cons ✓ Present the Final MIX versions
✓ Birth by Sleep on PS3
✓ Perfect HD remastering x The Arena is not online

Do you want to be a video game expert and know all the tricks, guides and reviews for your video games ? Holygamerz.com is a group of video game fanatics who want to inform you about the best tricks, guides and tips. We offer you the best information to be a reference in gaming, so here you can find guides, tricks, secrets and tips so you can enjoy your games to the fullest. Are you ready to get all the achievements of that game that you resist so much? Enter now and enjoy your favorite video game to the fullest!
Danganronpa 2 Review: Goodbye Despair (PC) ❯